In January, Tim and I spent a night at the ABode hotel in Exeter, while we were down there doing wedding planning. For those of you who don’t know, we both went to university in Exeter and have many happy memories there, which is why we wanted to get married in Devon. We settled for Dartmoor in the end, but most of our suppliers were located around the city centre, so we generally stayed around there.

The ABode hotel (formerly the Royal Clarence) is located on the beautiful cathedral green and is home to one of Michelin starred chef, Michael Caines’, restaurants. We were booked onto a ‘date night’ package, which included the room (a beautiful one, too!), a bottle of prosecco and a three course meal for the two of us in Michael Caines’ restaurant.

I had been to the restaurant once before, while we were at University. We went for dinner for a friend’s 21st birthday – it was lovely, but being students, we couldn’t afford to indulge too much!

For starter I chose the quail egg tartlet, with marinated truffle, onion confit and wild mushrooms. I’m a sucker for anything with truffle, it’s like catnip in human form for me!! It didn’t disappoint and was beautifully presented. Tim went for the pan fried scallops with sweetcorn and chorizo fritters, sweetcorn puree and red pepper fondue. 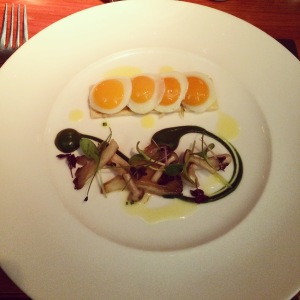 For main course, we both chose the roasted venison, served with braised pork belly, red cabbage, chestnut puree and fig. It was delicious – all of the ingredients and flavours complemented each other well, and the venison was cooked to perfection.

For dessert, I had a gingerbread tart, served with gingerbread ice cream and a raspberry macaron – an unusual mix of flavours and textures, but it worked!

The food and service was excellent, but we did find that the portion sizes were quite small (we also found this the first time we visited), so we had to order another side with our main. Hey, maybe we’re just little piggies, but in comparison to other fine dining restaurants we’ve been to at a similar price, the portions seemed smaller.

Regardless, I would definitely recommend a visit if you’re ever in Exeter, if it’s a special occasion. I’ll be posting some more Exeter restaurant reviews on here over the next few months, as part of my ‘Throwback Thursday’ blog posts.