Tim and I went on holiday to Croatia in July 2013. It was a bit of a strange holiday as my Dad had passed away in Cyprus only the month before. I really wasn’t sure if it was appropriate to go, but we’d had it booked for a year, and my friends and family said it would do me good to take my mind off everything and to relax for a while. Thankfully the bosses at my company at the time were incredibly lovely and fine with me taking the extra time off, and I’m glad I did it.

We stayed in a large hotel called the Rixos Libertas, right on the coast, about a 20 minute walk from the centre of Dubrovnik. For the first time, we were staying on an all-inclusive basis, which I was always a little hesitant about, but the quality of the food and drink in the hotel was fantastic. One of their ‘snacks’ was an enormous fruit plate, which could easily have fed a large group! However, we didn’t want to eat in the hotel every single night, so one evening we ventured into the town and came across a little taverna on the main coastal road between our hotel and the city centre (near the Pile Gate), called Sesame.

The restaurant is located within a 200 year old family home, surrounded by rich vegetation and orange trees, with tables outside on the ground floor, and on the terrace above, which is where we were seated.

We went a bit overboard with the starters, but hey, we were on holiday! We went for the carpaccio with truffle (as you may know by now, is one of my favourite foods in the world!) and some incredibly tasty oysters!

For main course, we decided on the Gregada for two people. This is a traditional Dalmatian fish stew most commonly found on the island of Hvar (other Croatian islands have a similar stew but they use tomatoes and call it “brujet”). It was packed full of all kinds of local fish and mussels and the flavour was unbelievable.

We also had desserts but sadly I don’t appear to have taken any photos of them, and can’t remember what we had, but I know they were very good! 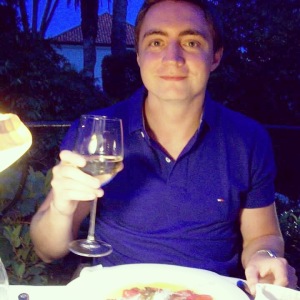 So if you’re ever in Dubrovnik, I would absolutely recommend Sesame Restaurant, if you’re looking to get a glimpse of the local culture and cuisine (providing it’s still open, which I really hope it is!) We found out as we were leaving that the restaurant also has its own inn attached, with four rooms available, so you could even stay for a night or two!