Just a quick post to let my fellow Londoners know that there’s a Jamie’s Fifteen Pop Up going on at Old Street Station today!

My very first cookbook was Jamie Oliver’s ‘The Naked Chef’ – I can still vividly remember queuing up outside Hammicks bookshop in Harrogate, about 12 or 13 years old, waiting to meet the man himself to get my book signed. He called me “sweetheart” and I’ve loved him ever since – that book is still sitting proudly on my bookshelf! I’m pretty sure it was him that got me into cooking in the first place, and in fact, inspired my generation to get into the kitchen. Prior to that, chefs on TV had always been older and frumpy. He made cooking ‘cool’! 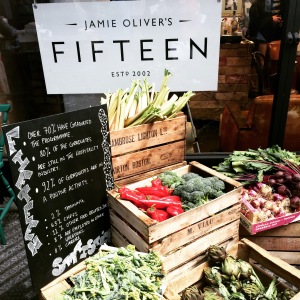 I saw the pop-up being talked about on social media yesterday, so I thought I’d head over during my lunch hour. I was actually expecting them to be selling food from there, but it’s more of an exhibition about how the restaurant started and the stories of its staff. For those of you who don’t know, Fifteen was opened by Jamie Oliver in 2002. The idea was to give disadvantaged young people the chance to train and work in the hospitality industry, all while creating fantastic food to serve in the restaurant. These stats which form part of the exhibition give you an idea of how successful Jamie’s idea has been: 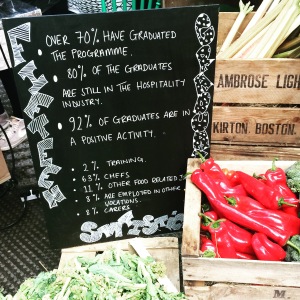 Funnily enough, despite having been to many of Jamie Oliver’s other restaurants and regularly cooking with recipes from his books, I’ve never actually been to Fifteen. Now that I know it’s only around the corner from my office (north of Old Street Station), I’d love to try it out!

I got the chance to meet some of the restaurant’s employees who were all super friendly, serving nibbles to passers-by in the station. Here are a few more piccies – if you’re in the area today, go and check it out and meet the team! 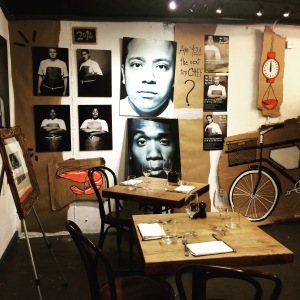