Dubbed the new ‘hipster sport’, Pétanque is becoming increasingly popular in the UK. I used to play it on holiday as a child and surprisingly (unlike most sports!) I was fairly good at it. I even beat Tim once, but of course, he’ll never admit to that ;).

For those of you who don’t know, Pétanque is a form of boules where the goal is to throw metal balls as close as possible to a small wooden ball called a cochonnet (literally “piglet”) or jack, while standing inside a starting circle with both feet on the ground.

This June (5th-7th), The Londonaise are hosting an International Pétanque festival at Barnard Park in Islington. And to celebrate, French restaurant Angelus is introducing a unique boules inspired main dish into their set menu, which I was lucky enough to preview this week.

Angelus restaurant was formerly a pub and covert meeting place for political figures such as Winston Churchill, tucked away in a beautiful mews alongside Hyde Park, a couple of minutes walk from Lancaster Gate station.

Upon arrival, we relaxed in the lounge and sipped on some gin and tonics, taking in the restaurant’s gorgeous Art-Nouveau interiors. As you may have read in some of my other posts, such as the French afternoon tea at the Sofitel St James, this is very much up my street! 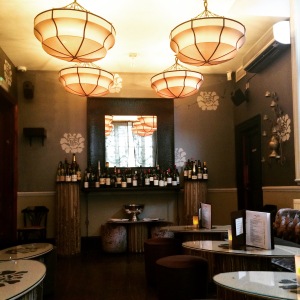 The restaurant is owned by the very charming Thierry Tomasin, former Chairman Sommelier of Britain, who wanted to offer a contemporary approach to the French classics with an unbeatable wine cellar. He has certainly achieved this. 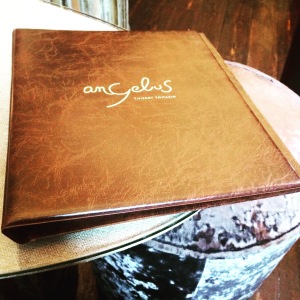 We were seated at our table in the restaurant, where we started with chicken liver parfait, green apple jelly, almonds and cider reduction, and chargrilled prawn brochette, fresh bok choy salad, pickled mushrooms, black sesame crisp and citrus dressing. It was served with a very crisp white wine from the south of France.

And then we were greeted with the pièce de résistance, the boules-inspired main course, created by chef Pierre Needham. The boule had braised lamb shoulder inside, and the cochonnet was filled with delicious pulled pork belly. It was very pretty to look at on the plate and was served with a 35% Malbec French red wine, made by a cornishman! In case you’d like to try cooking this main course at home, I’ve been given Pierre’s recipe: 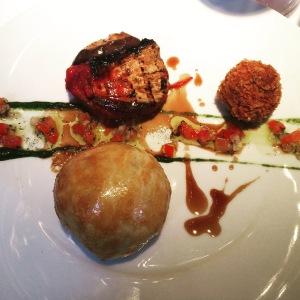 Braised Shoulder of Lamb: It is always best if possible to keep the meat on the bone,

regularly found deboned and rolled, its best to ask the butcher to leave it on.. Why?

because the bone helps regulate the temperature in the meat, thus keeping it moist.

Step 1 is to season the meat well in a large metal tray, prick and stuff meat with

whole garlic cloves (skin on), scatter a mire poix of veg over the meat – roughly

A sprinkle of lavender, some thyme and a handful of black olives for good

Cover with Cooking red wine and leave in the fridge to marinade for 12 hours.

To cook: Cling film and Foil the tray securely to prevent and steam from

The meat should be falling off the bone, pick meat, pass the cooking liquour

through a sieve and reduce by 75%.

Add this liquor to the meat, mixing well with hands – check the seasoning at

Form balls with your hands of approx 120-130g and leave to set in the fridge.

Simply cover and stretch over room temperature puff pastry on the ball, bake

cover to 3/4 of the meat with white cooking white wine.

Cook loosely covered in foil, in an oven at 150 for approximately 3 hours, or

until you can push the back end of a spoon through the skin with little resistance.

Simply pull the meat using a fork in strips.

Same process, reduce the liquor and combine well with meat.

The desserts were a bit more simple but still very tasty – I went for a cheese selection (of course!) and Tim chose the ice cream and sorbet selection.

And as if that wasn’t enough, we were treated to coffee and chocolates to finish.

So, what do you think? Has this delicious menu inspired you to get your Pétanque on?! The event will be supporting The Mercury Phoenix Trust, set up in memory of Freddie Mercury, raising awareness and funding charities globally in the worldwide fight against AIDS. On the first day of the three day event, celebrities will play, dressed as ‘French Freddies’ to help raise money for the charity.

Full details about how to sign up for the tournament are available on the Londonaise website. If you’d like to try out the new set menu, running throughout June at Angelus Restaurant, you can make a reservation via their website. They also have a separate a la carte menu available.
__________________

I was invited to review the restaurant by Angelus and Taylor Made PR but did not receive any payment. All views are my own.