On Friday night, Ceri and I decided to go for a spontaneous dinner. We’ve been trying out some of the restaurants around the St Paul’s area and this time, we tried Paternoster Chop House. For those of you who have been watching Channel 4’s hilariously entertaining ‘First Dates‘, you’ll know all about this place.

I knew that their speciality was steak, so I always assumed it would be quite expensive, and more for special occasions. However, I came across the set menu on their website: Two courses for £19.50 or three for £24.50, which seemed very reasonable.

Being a food blogger, I love a restaurant that’s on the ball with their social media. Just as I was leaving the office, I tweeted to say that Ceri and I would be visiting them that evening and within half an hour, I’d received a reply saying that there would be ‘two glasses of Chapel Down waiting for us on arrival‘. Fab customer service! I wasn’t sure if it would actually happen, but look what we were indeed greeted with, without any prompting: 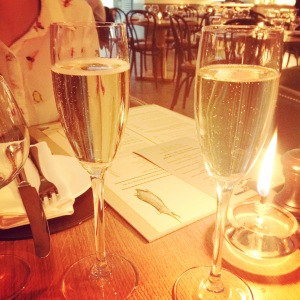 Paternoster Chophouse is brilliantly located, right next to St Paul’s Cathedral on Paternoster Square. Although the bar and outside areas were packed when we arrived, the restaurant wasn’t too busy – just about right to have a good ambience on a Friday night. 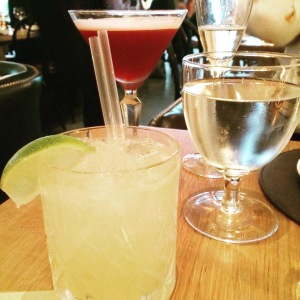 To eat, we chose from the set menu. I started with the Asparagus, Poached Duck Egg & Herb Dressing and Ceri chose the Potted Salmon with Watercress & Toast. Both were well presented, and we were also given a lovely ‘mini loaf’ of bread and butter, at no extra charge. 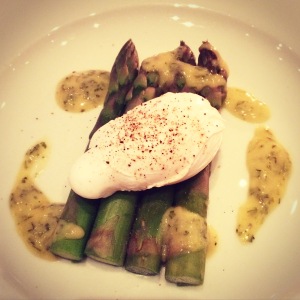 For main course, I went for the Salt Beef, Peas, Broad Beans & Asparagus, Ceri ordered the Pork Loin with Rainbow Chard & Grain Mustard Sauce, and we also ordered some Yocon Gold Potatoes on the side. The beef was beautifully cooked and incredibly tasty!

To finish, I opted for the Black Cherry Tart & Yoghurt Ice Cream and Ceri had the Caerphilly, Date & Fig Chutney. Now you know I’d normally go for the cheese too, but I’d had the cheese selection at a restaurant the night before, so I didn’t want to over-do it! The tart was lovely, and the yoghurt was a great (and slightly healthier!) alternative to standard ice cream.

The service was impeccable and despite it being a Friday night, we never felt any pressure to leave or to order any more food or drinks. We ended up spending nearly 4 hours in there, having a great catch up over good food, wine and cocktails. Although we were quite disappointed that the charming Fred Sirieix from First Dates wasn’t there 😉