As I’m sure you’ll know by now if you’ve been reading my blog since I started it a few months ago, I love everything French. French food. French culture. French everything! Every time I go to St Pancras station (which is fairly often, as I live and work near it), the temptation to just jump on the Eurostar to Paris is huge! “But you’d need your passport,” I hear you cry! Well seeing as I can’t drive (that’s a whole other story) I’ve normally got my passport on me to use as ID. So it’s an actual possibility!

When I was invited to an event hosted by French sirop brand Teisseire at Searceys Champagne Bar at St Pancras station last week, I had to lock the passport away! And I brought the lovely Ceri along with me.

Teisseire might not be a recognised name in the UK yet, but it’s a well established brand across the Channel. It all began hundreds of years ago, in 1720 to be exact, when Matthieu Teisseire, a liquoriste and vinegar maker, settled in the French Alps where he set up a distillery. He soon introduced his delicious cherry liqueur to the local neighbourhood and the rest, as they say, is history.

At the event, we were presented with a French bistro style menu, cleverly offering a three course meal of cocktails – starting with a non-alcoholic drink, moving onto an alcoholic beverage, before finishing with a sweet/dessert-style drink, all using Teisseire products. Although strangely, only three of them were being served – Fruit de la Passion (Sparkling Water, Teisseire Passionfruit, Limejuice, Passionfruit puree), Fraise de Champagne (Champagne, Teisseire Strawberry, Fresh Strawberry) and Gin Blush (Gin & Tonic, Teisseire Pink Grapefruit, Lime). They were all really refreshing – I particularly liked the Gin Blush. I’m not normally a fan of grapefruit, I find it far too sharp. But mixed in with gin and tonic, it worked perfectly, and gave the flavour an edge.

We were introduced to a really interesting guy named Alex McKechnie. Originally from Australia, Alex is a flavour consultant who is often brought in by major brands and restaurants to help them out with, you guessed it, their flavours! But I really don’t feel that ‘flavour consultant’ even does him justice. He is truly fascinating – he sees flavours as colours and told us about some of his insanely creative concoctions For me, it was on a par with some of Heston Blumenthal’s creations, but with drink rather than food. 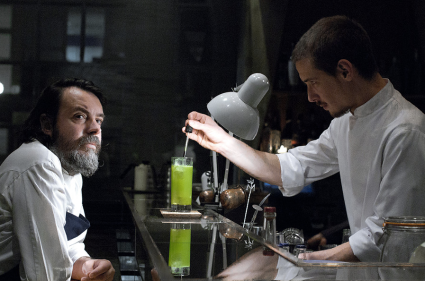 Next we met the fabulous brothers who own Blanchette restaurant – we chatted to Yannis and Maxime, while Malik looked after the music for the evening. They explained to us how Teisseire had always been a part of their childhood growing up in Normandy and they have continued to use it, including in the drinks they serve in their Soho restaurant. The menu at Blanchette looks fantastic – Yannis and Maxime explained how their food is French cuisine ‘with a twist’. I definitely have to try it out soon – I’m especially intrigued by the Ox Cheeks Bourguignon!

It has certainly made me think differently about how to use products like this – I regularly drink cordials, but I never think to use them in alcoholic cocktails or in hot drinks. I was given some Teisseire products to take home, so I’ll definitely be experimenting! If you’d like to try them out, you can buy them at Waitrose, or find out more at their website.

A Night At The Waterside Inn

I was invited to this event by Teisseire and Iris Worldwide but did not receive any payment. All views are my own.