I’m very excited to have a post on the blog from my very own ‘Mumsie’ – I’m sure my mum will happily admit to being a technophobe – she doesn’t have any social media accounts, so having her words written up on here is really exciting for me. She’s written about her experience at the BBC Good Food Show Spring in Harrogate in April. Keeping with the theme of the photos from #FoodieFriends so far, here’s a pic of Mum on our wedding day earlier this year, doing a fantastic speech that had everyone in hysterics!

I’ve also noticed how much I write like her!! Over to you, Mumsie!

“Earlier this year, together with two friends, I visited the BBC Good Food Show, held at the Harrogate International Centre. Having only recently returned from living in Cyprus, where ‘Food Shows’ are few and far between, I was eagerly awaiting this new experience!

From the minute we walked through the doors, into the first ‘Hall’ we were greeted with a vast array of stands, housing everything from chutneys to chorizos, chocolates to cheeses!

As we proceeded inside, we were greeted by an extremely pleasant young lady, offering us samples of Thunder Toffee Vodka, and yes, even though it was only around 10am, I did, reluctantly, participate! I think it was possibly the nicest alcoholic drink I’ve ever tasted! Thunder was advertised as being ‘One of those drinks whose beauty is in its simplicity. Ice-cold as a shot, over ice, or in a delicious cocktail.’ My friends had to drag me away from this stand…….. and so our day began.

Even at this time of the day there were samples of wines, gins and whiskies being tasted, and I couldn’t possibly mention all the suppliers, but later in the day I did try a gin and tonic from Mason’s Yorkshire Gin, a company based in Bedale. I’m not sure if it’s readily available in supermarkets, but I did see it for sale at Fodders [a Deli, butchers and café at the Yorkshire Showground in Harrogate] recently. I also tried a ‘neat’ gin from Portobello Road Gin, which was excellent. The young couple on the stand explained how the company had started, and gave us details of the Ginstitute, and their various events being held, which you can find out about on their website. 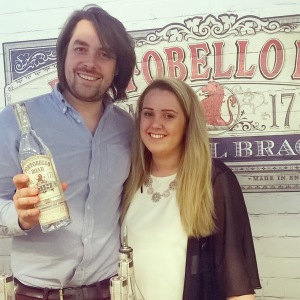 Cheese is one of my favourite foods, [probably because it goes so well with alcohol!] and there were many stands, selling numerous ‘flavours’. Michael Turner [seller of Artisan Cheese, who can be found on Facebook] had an amazing display including a ‘black’ cheese, which I had never seen before. He told us that the ‘blackness’ is achieved by the addition of Charcoal! I didn’t much like the thought of eating charcoal, but after tasting a sample, was completely hooked on this lovely, creamy cheese, so that was the first purchase of the day!

To go with the cheese, what could be better than some pickles, and I couldn’t resist visiting the stand of Pucketts Pickles [try saying that quickly!!!] a York based company, selling a multitude of spicy delights.

From sharp to sweet, my next purchases were from the Yorkshire Wolds Bees stand, where I sampled the most delicious marmalades, my favourite being the Lemon and Honey variety. From there to the Bracken Hill Yorkshire Preserves stand, and, oh my goodness, what a selection, my favourite here being the Bramble and Liquorice, a ‘taste sensation’!

In between visiting the various Halls, we had ‘booked’ to see a cookery demonstration by the Hairy Bikers. This took place in the Royal Hall, an outstanding setting. The ‘boys’ were cooking Mackerel fillets with gremolata and Crispy pork schnitzel with potato salad. All I can say is, it’s a good job the recipes were printed in the show guide, because most of the time was spent laughing at their jokes and their antics. They are two very funny people! Also giving demonstrations, over the 3 days, were Mary Berry, Paul Hollywood, John Torode, Brian Turner and James Martin. They were also being ‘interviewed’ at certain times in one of the Halls, and were also available for book-signings!

Also at the show, were members from The School of Artisan Food, based in Welbeck, Nottinghamshire. They cover short and bespoke courses for beginners to professionals and their list of Short Courses for 2015 is amazing! For example, there are 15 courses under the heading ‘Baking’, ranging from 1 day to 3 weeks, and covering Artisan Baking, Patisserie, Viennoiserie, Bread making, Italian Baking, etc. etc. There are Butchery Courses, Dairy Courses, Brewing Courses and Business Courses. Everything, I would imagine, to encourage the eager amateur and professional alike.

Best buy of the day: 5 packs of smoked salmon [including Romanov, honey roast, and malt whiskey] for £10, from the Bleikers stand.

Just to finish off, I must mention Ryan Tindall, who is the owner of Just Jelly, from High Hawsker, Nr Whitby. His stand looked so inviting, with its range of Jelly products, such as Mint infused Jelly and Beetroot infused Jelly, and finally Yummy Yorkshire, with a range of seriously delicious ice-creams to make your mouth water!

There was so much to see and sample at the show, and I would love to mention everyone, but that would be impossible. A fantastic day out for food lovers, and the goody-bag, given to us as we were leaving, finished the day off nicely! I can’t wait for the next one!”