As you may have read in this previous blog post, I recently spent the weekend up in North Yorkshire where my mum lives, and where I grew up as a child.

On my last day, before begrudgingly catching the train back down to London, we decided to go for Afternoon Tea at Bettys Tearoom in Harrogate. I had taken my mum to Afternoon Tea at Harrods last year as a Mother’s Day treat and we enjoyed it so much – I think it’s a lovely way for mums and daughters to have cake and a catch-up! Apparently Afternoon Tea was first invented by The Langham Hotel in London and they are marking the 150th anniversary this year. 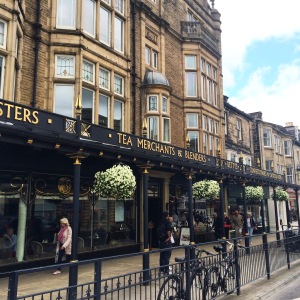 Bettys is highly regarded across the globe and at weekends, you will often find a queue around the corner of the building, with tourists from all over the world paying a visit. It was founded by Frederick Belmont, a Swiss baker and confectioner who came to England in search of opportunities to develop his craft skills. Bettys was opened in Harrogate in 1919, although no-one knows the reason behind the name. 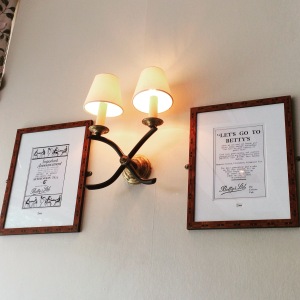 I’d looked at the website previously which said that you could book Afternoon Tea on Fridays, Saturdays and Sundays, which I took to mean that those were the only days it was available. We were visiting on a Monday and thought we would just have some tea and cake, but we were pleased to find that they were indeed serving Afternoon Tea, the website just meant that advance booking was needed on those days. 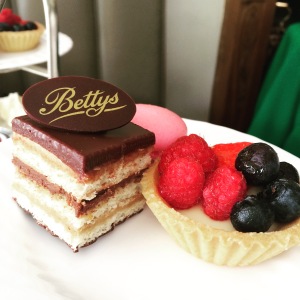 Looking at the menu, I was actually expecting the tea selection to be a lot more diverse. Some of the previous Afternoon Teas I’ve been to have offered a much wider and more exotic range of teas.

However, the ‘Tea Room Blend’ was perfectly fine and the sandwiches, scones and cakes were lovely, along with excellent service. I like that they use local suppliers to make this a truly Yorkshire Afternoon Tea.

It would have been great if Bettys was doing something a little bit different, but it was very much like other Afternoon Teas I’ve had. But I doubt that they need to change their menu – they have such a great reputation and history that I’m sure people will continue to visit for many years to come!

The Afternoon Tea was £18.00 per person, which is on a par with other Afternoon Teas I’ve been to in London (if a little cheaper) and around the same as other hotels in the Harrogate area offering Afternoon Tea. But if you’re looking to have Afternoon Tea in Harrogate, it just has to be at Bettys!

They now also have a number of other Tea Rooms in North Yorkshire, in York, Harlow Carr, Ilkley and Northallerton, as well as a cookery school.