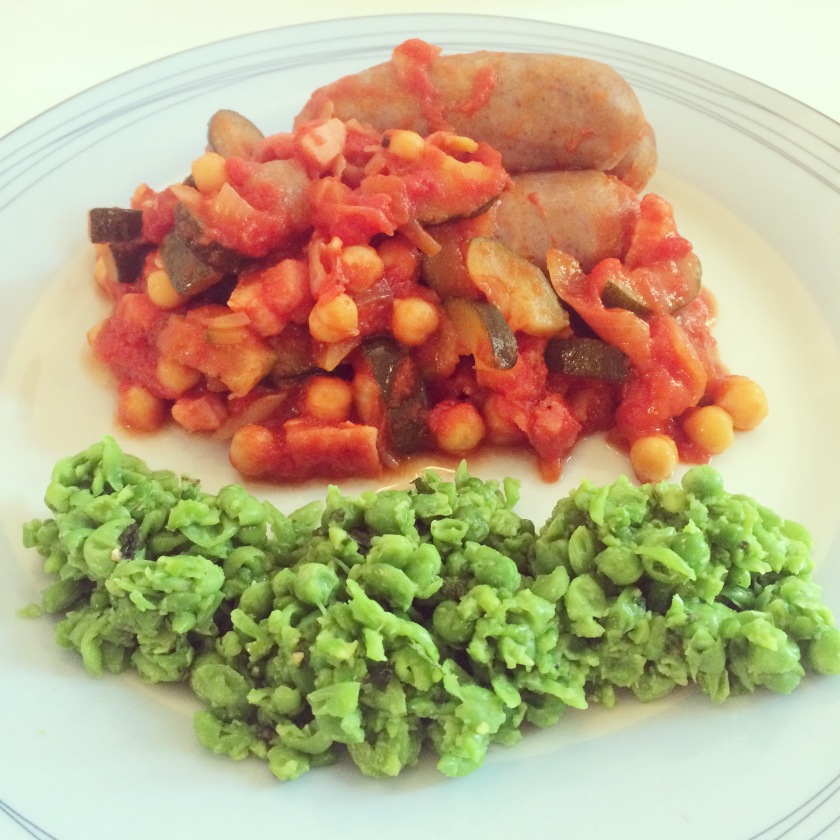 The other day, I was really craving a sausage casserole, but I wanted something a little different to the norm. So I thought I’d combine European meats (sausages/pancetta) with some Moroccan/Middle Eastern flavours. It might sound strange, but it worked! It’s also a really easy recipe, as you just throw everything together. Admittedly, the photo doesn’t make it look that appetising – I just need to find a better way of serving it!

Half tin of chickpeas

Half a lemon (juice)

Salt and pepper (to taste)

Heat some olive oil in a pan on the hob on a medium heat (use a pan which can also be transferred to the oven).

Add the onion and garlic and heat until soft, before adding the pepper and courgette. Cook together for around 5 minutes.

Pour in the tin of tomatoes and half tin of chickpeas.

Add the paprika, coriander and cumin with a pinch of salt and pepper, and stir everything together. Cook for another 5 minutes.

Add the sausages and pancetta, making sure they’re covered in the sauce and not just placed on the top, and put into the oven for 30 minutes.

While the casserole is in the oven, boil the garden peas in a pan and drain the water.

Add the mint into the pan with the peas, with a squeeze of lemon juice, and salt and pepper. And give it a good mashing!

You’re then ready to serve everything up! I think next time I would probably brown the sausages first in a pan, to give them a bit more colour.