My latest foodie discovery at Boxpark in Shoreditch is Sutton and Sons, which I visited for lunch last week. In case you haven’t been to Boxpark, it’s a big pop up next to Shoreditch High Street station in East London, made up of a series of containers, housing all sorts of businesses from clothing brands to restaurants. So far I’ve visited and reviewed Falafelicious, Sushilicious, Chicken Box and Porkys.

You can’t beat good fish and chips and I’ve noticed it’s something I don’t eat as much of in London, compared to other places I’ve lived (The Magpie in Whitby takes some beating!) So it’s definitely time for a bit of a Fish & Chips revolution in the capital!

Sutton and Sons are based in Stoke Newington, with a restaurant and takeaway, so the Boxpark site is like a ‘mini version.’ All of their fish is fresh and responsibly sourced, from their very own fishmonger business.

I visited the Boxpark site with my colleague, Yasmin, during our lunch hour, and it was fairly quiet when we arrived. The menu is pretty big for a small pop-up and I was a bit overwhelmed as everything looked so good. Yasmin ordered the Lobster Sub, which I’d been very tempted to go for, but felt like I should try their Cod & Chips. 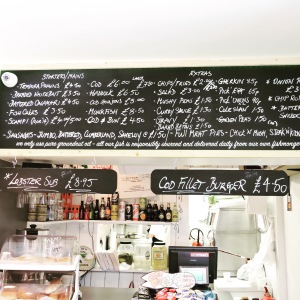 We took a seat inside on the bar stools, and a queue started forming pretty quickly, so we must have missed the initial lunch time rush. But we unfortunately had to wait quite a long time for our food (around 20 minutes). If it’s a fish and chip takeaway, you expect to be able to take your order away pretty much on the spot. In a restaurant, you might be happy to wait if you’re seated at a nice table, when you’ve got a bit more time to spare. But when you’re fairly short on time and not in the most comfortable of surroundings, it’s not ideal. Many of the restaurants in places like Boxpark are in a bit of a predicament – they’re serving high quality food for the same price as restaurants, but in a much more casual environment.

Anyway, the food eventually arrived and we were ready to tuck in.

The lobster roll was huge and absolutely packed with lobster. In fact, I’ve never seen so much lobster meat in a dish, which is particularly reasonable for £8.95. Only negative was that there was a bit too much sauce – the flavours of the lobster could have shone through with a bit less sauce.

The cod was also massive as you can see from the photo. It was perfectly cooked and very ‘meaty’. I was a bit worried the chips were undercooked as they were quite pale, but the texture was just as it should have been and very tasty, without being greasy. The manager explained that they were temporarily using a different type of potato which might explain this. 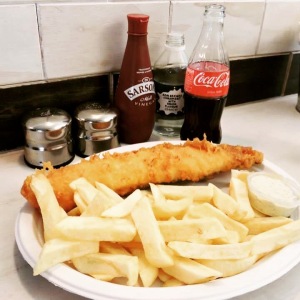 We also ordered a deep fried mars bar, as it was something I’d always wanted to try. Yes, it sounds hideous, but it’s a bit of a British institution!! It really wasn’t very appealing to look at, so I didn’t take a photo of it. As we were short on time, we took it back to the office for everyone to give it a try – it had mixed opinions! Some people really didn’t like it (fairly understandably!) but I didn’t mind it – it was a bit like a fritter you might eat at a chinese restaurant, but rather than fruit inside, it was all gooey and chocolatey!

I’d really like to try out the Sutton and Sons restaurant in Stoke Newington so I can get the chance to try out some more of their dishes in a more relaxed environment. But if you’ve got a craving for some good old fish and chips and you’re in the Shoreditch area at lunchtime, Sutton and Sons is just what you’re looking for.

I was invited to review Sutton and Sons but did not receive any payment. All views are my own.