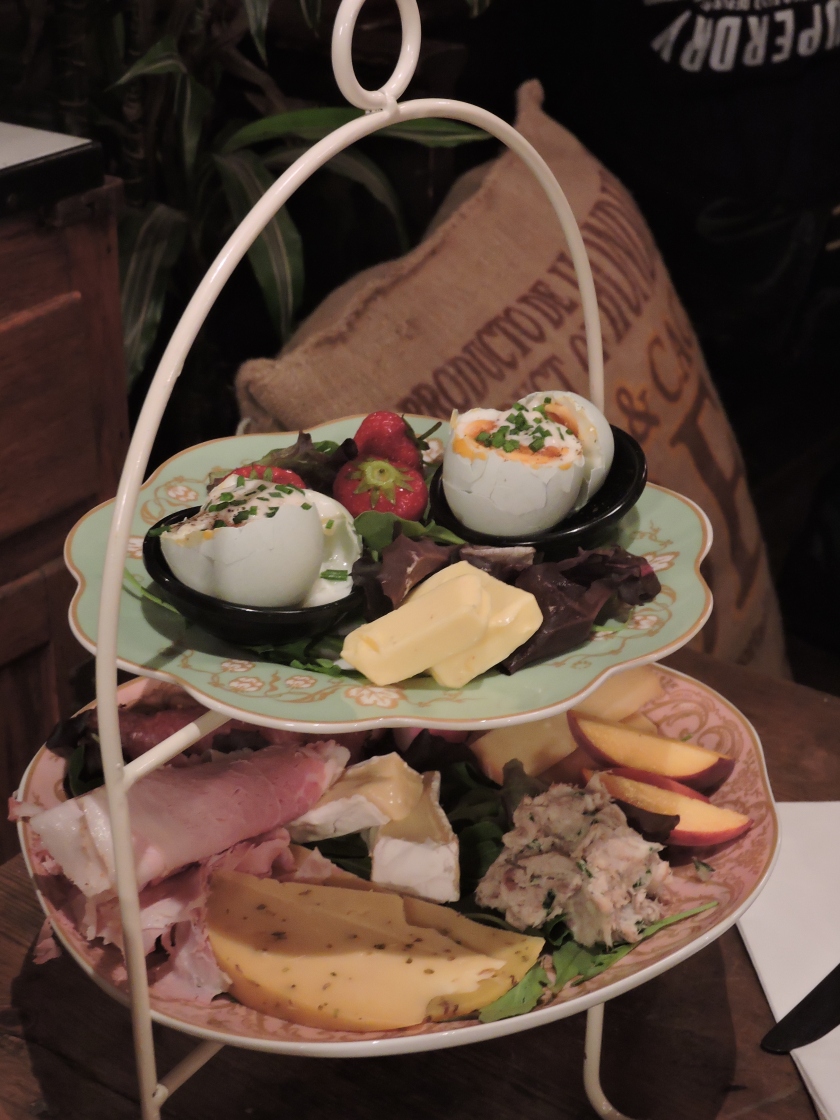 My first trip to Berlin (and in fact, the first time I ever visited Germany) was back in 2011 with my friends Kell and Eva. It was a lovely girlie weekend away, packed with sightseeing, history and culture, and late nights where we danced until the sun came up at some of Berlin’s top nightclubs. 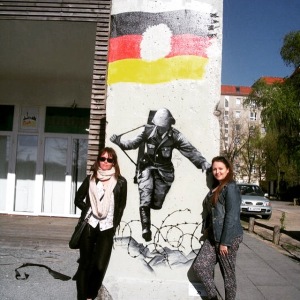 However, what came as a disappointment was the food. Admittedly, we didn’t know exactly what to expect or what to ask for, although we had heard that currywurst was one of Germany’s specialities. Our first experience of it was at a cafe close to the Berlin Wall. To be honest, it was a bit of a ‘greasy spoon’ as we Brits might call it, but we couldn’t find anywhere else nearby and we were ravenous! You can imagine our disappointment when this was plonked on the table – essentially a tinned hot dog with tomato ketchup and curry powder. 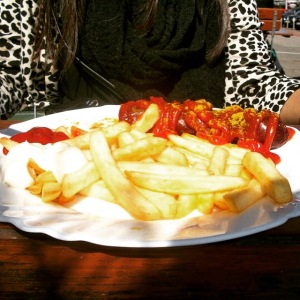 We were convinced that this couldn’t be right and so Eva ordered it again, at a much nicer restaurant the following evening. The hysteria on her face says it all, as the currywurst emerged from the kitchen looking very much like the one from the day before.

There were some nice dishes that we tried while we were there, such as weisswurst (a white sausage served with pretzel and mustard), but overall, my impression of German food wasn’t the best.

When I went to work at 2K in 2012, I soon discovered that many people in the business (including my boss) were German and they were always singing the praises of German food. And on my many business trips to Cologne and Munich, the food was indeed, very good! A huge schnitzel with egg and potatoes takes some beating, even if it is a complete carb fest – here’s one I had in Cologne: 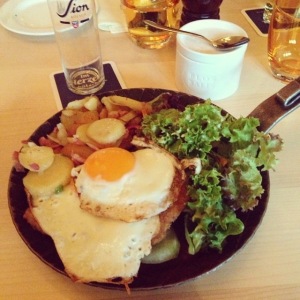 So when I was told about a ‘Berlin Brunch’ talking place in London, I was intrigued. The menu was very appealing to me, so I hoped it would change my perception of Berlin cuisine.

‘Brünch’ is a new pop up by Berliner, Noemi, who wanted to bring all of Berlin’s finest foods to the UK’s capital, in an informal, friendly atmosphere.

On the date that we attended, the pop up was held at LASSCO ropewalk in Bermondsey, a venue which I previously visited for Disappearing Dining Club (Swallows & Amazons) – fortunately this event was in the daytime (being brunch, and all!) so I was able to get some better photos. It’s such an amazing place to hold a pop up, and there’s a food market and a few other restaurants along the street at weekends – if you haven’t been, I’d definitely recommend it!

We were warmly greeted by Noemi who showed us to our table and talked us through the menu.

Now how good does all of that sound? There’s more information about all of the local suppliers below. The meats and cheeses were presented on a cupcake style stand, which looked incredible pretty, and was a unique way of serving.

All of the meats and cheeses were delicious, especially the Cumin Gouda, which was quite unusual. The eggs were just divine, deep orange yolks (just as they should be), you could tell they were of very high quality.

Now as you’ll know if you’re a regular reader of Got To Be Gourmet, I’m rather meat and cheese obsessed, so you would have thought this was my favourite part of the meal. But I was actually really blown away by the sweet dishes – so much so, that I had to have seconds!

The Amaranth and Chia Granola with Vanilla Quark was so flavoursome, with great textures. The homemade jams (plum and strawberry) were gorgeous, and I don’t normally like jams!! 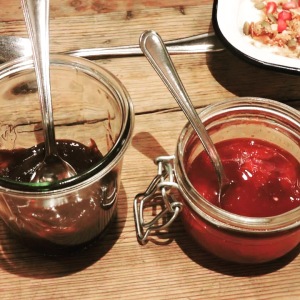 And lastly, the waffles were so, so good. Perfectly cooked and very moreish! It has made me want to buy a waffle maker at home, although this is probably rather dangerous! Noemi was kind enough to provide her waffle recipe, below.

I was keen to try out some of the soft drinks traditionally drunk in Berlin, so I started with a Club Mate. It’s hard to explain the flavour, it really has a taste of its own. It has a very high level of caffeine and in my mind had an almost ‘cigar-y’ taste to it (not that I’ve ever eaten a cigar, but hopefully you get what I mean!) I really liked it, although I couldn’t drink a lot of them. Apparently it is made from an old South American jungle plant, with ‘the strength of coffee, the health benefits of tea and the euphoria of chocolate’ all in one beverage, plus it was nominated as a ‘Best Vegan Drink’ in 2014. 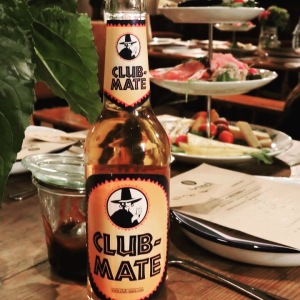 Next I moved on to Fritz Cola. This drink was established in 2002 by two friends in Hamburg who wanted to create a new and improved type of cola drink. And so they did it, from their student digs, on just a few thousand Euros. It wasn’t quite as sweet as Coca Cola (you didn’t get the feeling your teeth were dropping out as you drank it!) so it is a definite improvement!

Something I noticed about the restaurant was the music, which isn’t something I often pick up on. But it was just very cool. Very Berlin! I’ve since seen that Noemi has an electro/house playlist via Soundcloud on the website. It’s clearly important for Noemi to get across all aspects of a Berlin brunch, from the food to the ambience and music.

It was such a lovely afternoon and it has really made me want to go back to Berlin and experience a German brunch in the country itself. If you can’t hop on a flight to Germany, fear not! Noemi has some more pop ups coming up very soon!

You can find out more on the website here, but the next one will be taking place on 16th August at London Fields, and then on 23rd August in Peckham.

St John’s Bakery: Supplying white and brown sourdough loaves, freshly made each morning with the finest ingredients. St John’s is a small independently owned group that runs a Michelin-starred restaurant and bar at Smithfield, bread and wine shop in Spitalfields and St John’s Bakery next door to LASSCO Ropewalk.

Moxon’s Fishmonger: Located at Clapham South tube station, Moxon’s supplies fresh fish which has been sourced ethically from all around the British coast and Billingsgate Market daily, and smoked in-house.

M. Moen & Sons: M. Moen & Sons occupy a grand Victorian space in Clapham, where they cure their own bacon and source premium organic and free-range meat.

Rippon Cheese: Founded in 1990 by Philip and Karen Rippon, the store is located in Pimlico and stocks up to 500 artisan cheeses from across Europe with the majority coming from Great Britain and France.

Lake District Quark Dairy Farm: ‘Made by British farmers’ – paying acknowledgement to the 100% British Farmer ownership of the Lake District Dairy Co brand. Quark is a fresh curd cheese made from skimmed milk. It is popular in Germany and high in protein, naturally fat-free and low in salt and sugar.

Below is my Waffle recipe for you to try at home. Here is how you make them:

A few drops of vanilla extract

3) Add the milk, oil and vanilla extract to the egg mix

6) Once it’s hot, coat the iron with some butter and ladle in the batter mixture

5) If you have a Belgium waffle maker, turn the waffle iron upside down to allow the batter to rise evenly

6) Waffles are cooked after about  two minutes but carefully check in between. The waffles should be crispy on the outside and nice and fluffy on the inside – yummi!

All that’s left to do is enjoy 🙂

* Buckwheat Flour – I only started to experiment with Buckwheat recently. Despite it’s name, buckwheat is not related to wheat and is a fantastic gluten-free superfood that is inexpensive to buy and versatile to use. It is perfect for making pancakes and waffles.