It dawned on me this week that it’s been eight months since I was last in Cyprus. And with my mum now living in the UK, I don’t know when I’ll next be going back. Eight months is the longest I’ve been away from the island since I moved there as a 13 year old. The blog is therefore well overdue a post in my ‘Cyprus Series’, and this time, I’m writing about Vatouthkia. I briefly mentioned this taverna in a recent post about Greek/Turkish coffee, but was saving all of the details for a full blown post, which it more than deserves.

Vatouthkia was our favourite local restaurant, down a crazy dirt track on the way to the Adonis Waterfalls between Paphos and Peyia. It’s the kind of place which you would only go if someone told you it was there – pulling off from the main road and heading down the track felt like you were toppling over the edge of a cliff! They have since put lots more signposts and adverts up for it, but the road remains pretty much the same, and that’s all part of the charm. 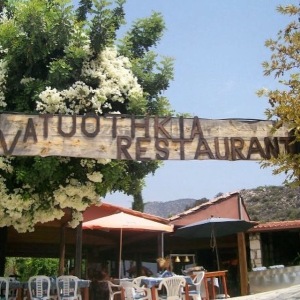 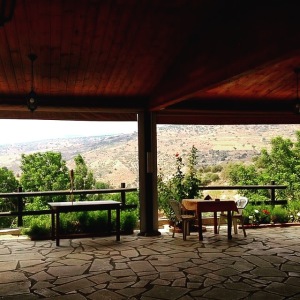 We used to go there in a big group of friends on most Sundays, where we would easily spend hours eating and drinking the afternoon away. The owner, Niko, and head waitress, Angela, are some of the nicest people you could ever wish to meet in your life. We even went to the Christening of Niko’s first child! Here’s one of my all time favourite photos of my Mum and Dad at the restaurant. I actually have a feeling this may have been the last time I went there with my Dad, so it has even more meaning:

Many years ago, when Angela mentioned that she needed to go away for a few weeks and was looking for a temporary replacement, I could have kicked my mum under the table when she suggested I could do it (in fact, I think I probably did!) At this stage I was an angsty 15 year old who hadn’t done anything like that before and was quite happy wasting away my weekends on the beach with my friends. But I’m so glad I did it. The hours were long and it was completely knackering. But I learned how a restaurant operates and about the food and drink being served, and got to meet lots of interesting people. And I was actually making my own money! From that day on, I continued to work part-time until I left Cyprus, during uni, and secured a full-time job in London before I’d even graduated. It was tough love to begin with but gave me the best work ethic I could ask for.

And the food was just wonderful, with the biggest portion sizes you’ve ever seen! Vatouthkia serves all kinds of Cypriot foods you could hope for, with all of the usual dips (tahini, tzatziki, taramasalata etc), salads and main dishes such as kleftiko and moussaka. On special occasions Niko would do a suckling pig, which was one of my favourites, as seen in the photo of me below. 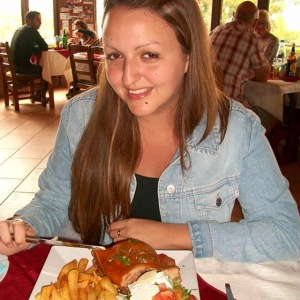 When we first visited Vatouthkia in 2001, it really wasn’t much more than a rustic shack on the route down to the waterfalls, with donkeys grazing in the field next door. Here’s a photo of a family friend and one of her children many years ago with one of the donkeys! 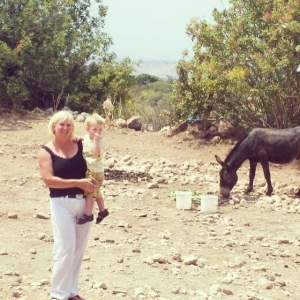 Since then, Niko has made a lot of improvements to it, hosting events and parties there. And what I always forget to mention is the incredible view – you can see for miles across the hills and along the coast. You tend to take views like this for granted when you live there, but they really are special. 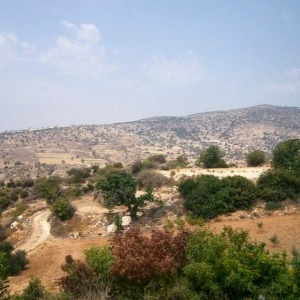 So if you’re ever visiting Paphos, you have to give Vatouthkia a try. You’ll be welcomed like a long lost relative and will have a relaxing afternoon filled with good food, in an incredible location. You can find out more on their Facebook page but to get to it, drive through Tala village into Kamares Village and follow the signs to Zelemenos and Vatouthkia. It’s not the easiest place to find, but it’ll be worth it! Pinky promise!…