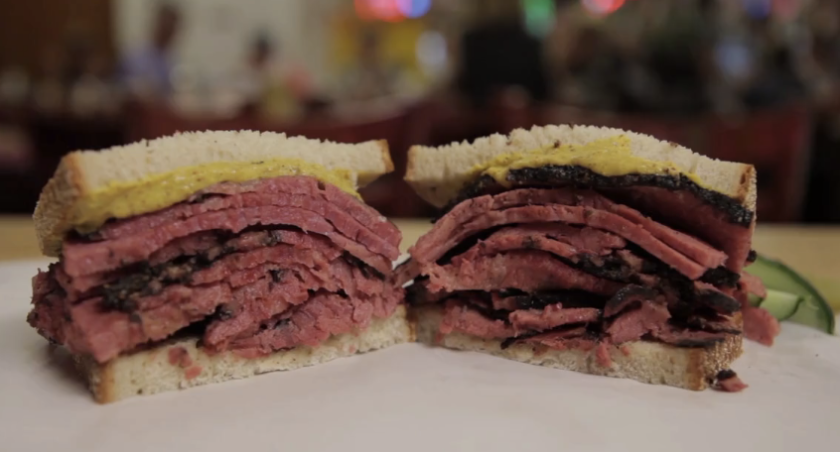 This week’s ‘Throwback Thursday’ post is about Katz’s Deli in New York City’s Lower East Side, which I visited a year or so ago on a business trip.

My old boss used to live in New York and raved about their pastrami sandwiches, so we just had to see what all the fuss was about. You may or may not know that this venue is where the infamous scene from ‘When Harry Met Sally’ was filmed. You know, this one…

Upon googling that image, I came across a lot of ‘copycat’ photos, so it would appear it’s quite a trend to give this a go when you visit. I missed out there, clearly 😉 But there is so much more to this place than being the set of a famous movie.

The deli has a long history. It was originally established in 1888 by the Iceland Brothers, before the name was changed to ‘Iceland & Katz’ after the arrival of Willy Katz in 1903. In 1910, Willy’s cousin, Benny, joined him and they bought out the Iceland brothers to officially name it ‘Katz’s Delicatessen’, as it’s still known today.

It’s a very basic canteen style restaurant, with a huge counter where you queue up to order your food. You’re given a token as you enter which you use to pay when you leave. You get fined if you lose it, so we were clinging on to it for dear life! The menu was vast and it could be quite a daunting experience if you don’t know what you’re doing. Much like most things in New York, everything is fast paced and they don’t take any sh*t, if you pardon my french. Luckily our boss knew just what to do, and ordered some enormous pastrami sandwiches with a huge pile of pickles and gherkins.

We tucked into them and I can confirm that they were gorgeous! The most meat I’ve ever seen in a sandwich, but New Yorkers don’t do things by halves!

Their corned beef and pastrami is cured using a slower method, which flavours the meat, without injecting chemicals, water, or other additives to speed the process. The finished product can take up to 30 days to cure, while commercially prepared corned beef is often pressure-injected to cure in 36 hours. Quite a big difference! And you can really tell that from the taste.

Despite being rather jet lagged (we’d literally gone there straight from the airport) we managed to wolf them down. And then came the moment of panic when we realised we’d accidentally sent one of the tokens away with the rubbish on our trays. Thankfully they let the silly Brits off the hook and allowed us to leave 😉

If you’re planning on visiting New York, you have to give Katz’s Deli a try, you won’t be disappointed. They’re at the corner of Ludlow Street, at 205 East Houston Street.

*Main image taken from the Katz’s Deli website, as mine were pitifully low resolution!