This post is a tricky one to write. Because it’s probably the first since starting this blog at the start of last year, that’s not exactly positive…

As you may have read on here, we spent the May bank holiday up in Edinburgh as a present for our first wedding anniversary and had a wonderful time. We’d been particularly excited about our booking at The Witchery, a restaurant we’d heard great things about.

According to the website, it was established by James Thomson in 1979 in the near-derelict basement of an Old Town building, Boswell’s Court. Since then he has acquired and restored further parts of the building, plus an adjacent one, and they now are home to the Witchery, the Secret Garden and a collection of nine unique suites.

Upon our arrival, we ventured down a narrow alleyway, and stepped into the intriguing world of The Witchery, with its gothic yet cosy décor. We were seated at a lovely candlelit spot tucked away in the corner, and we were very content!

There were two ladies sitting next to us, who didn’t seem to be happy. It was impossible to tell what they were unhappy about, whether it was their experience at the restaurant or a personal issue (I was rather selfishly hoping for the latter). They soon left and I forgot about it, as Tim and I chatted over a bottle of red wine, a Malbec-Cabernet Sauvignon, which was beautiful, I’d like to point out.

Tim ordered the dressed crab to start, and I went for the lobster bisque – one of my favourite dishes, and something we actually made for our families at Christmas. The dressed crab was perfectly nice (if a little small). The lobster bisque, while well presented, was bland and slightly watery! It actually tasted as though it had been watered down (although I would hope that wasn’t the case!) I love a lobster bisque with a few nice meaty bits of lobster thrown in, but no such luck in this case. 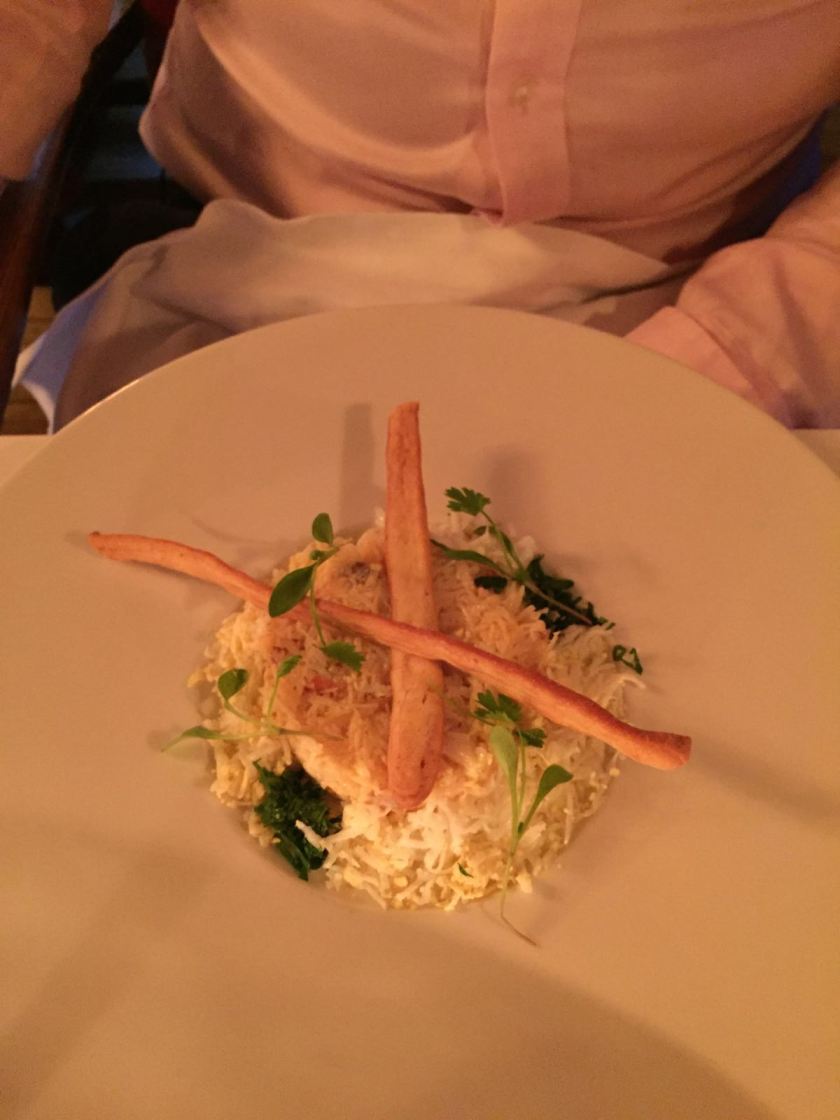 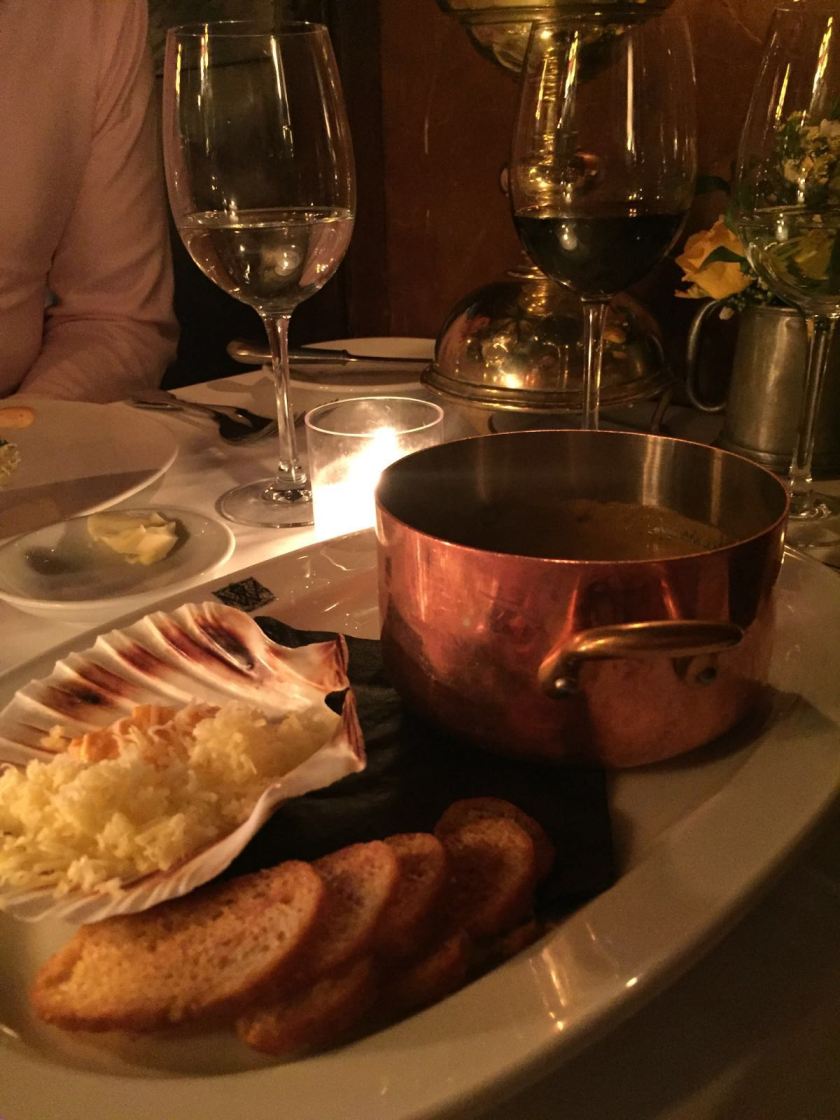 We had high hopes for the main course – we both ordered the rib eye steak, with bone marrow. How could you possibly go wrong with a steak? Well we soon found out! The steak was generously sized, but just tasted of nothing and was chewy! There were no juicy flavours from the melting of the fat in the meat, and no flavour from seasoning. The bone marrow was good, as were the sides (seasonal veg and mushrooms, but you would seriously hope you couldn’t go wrong there!) 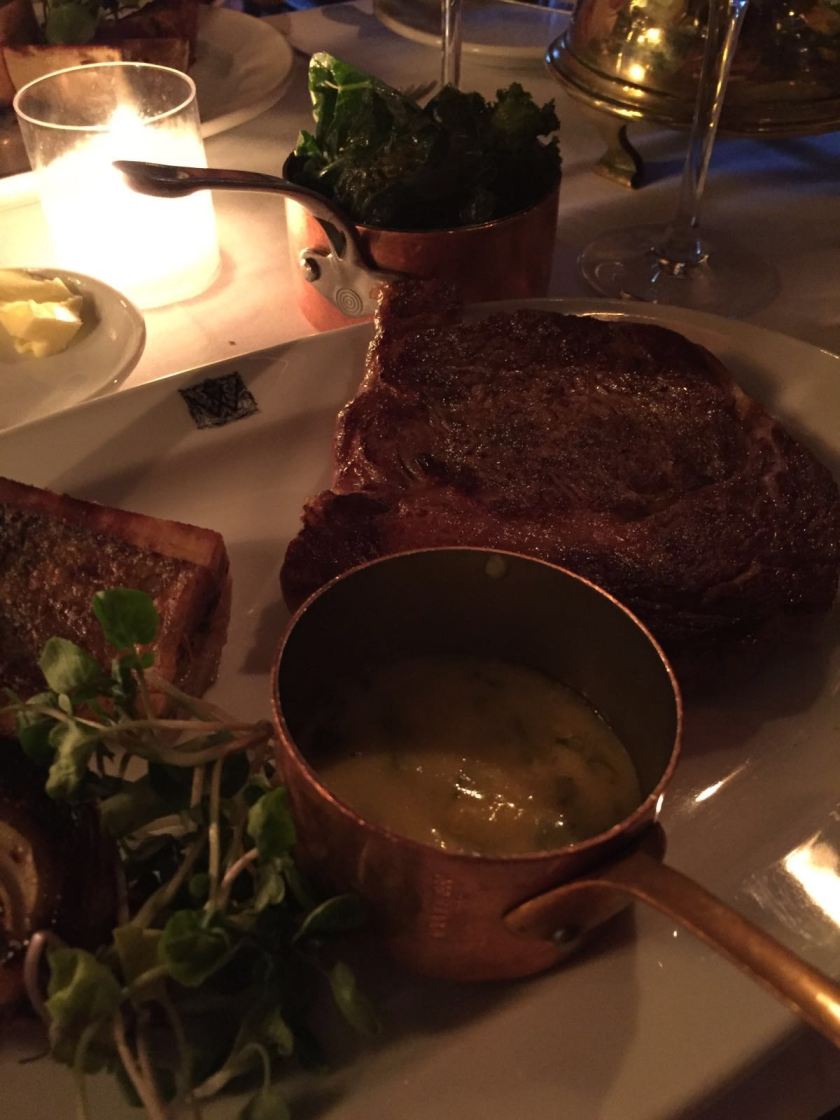 We probably wouldn’t have minded if this had been a standard price meal. But it wasn’t. This was ‘special occasion’ price territory.

The waiter/manager did ask how everything was (to be fair, the service was good). We were admittedly a bit British about it and didn’t go into detail, but this was mostly because the tables around us would have heard everything, and we didn’t want to put a downer on their evenings. But our response was that it was ‘OK’, which I feel in British terms, is fairly obvious that it was below par!!

And this was one of the very first occasions where we didn’t order dessert, simply because we didn’t want to be disappointed and spend even more money. But we were on holiday after all, and we didn’t want this to ruin our night – so we found somewhere else to have dessert and a whisky or two! But I’ve never, ever had to do that before, which is disappointing.

I briefly read a review of The Witchery on The Telegraph website (I say briefly, as I never like to know too much about a place when I’m already planning to visit) but the gist of it was that you should order from the three course £35 set menu to make the most of this restaurant. I did take note of this recommendation and told Tim too, but we simply didn’t fancy any of the dishes on that menu. If we had gone for the set menu, we might not have been so disappointed. It just felt like a lot of money for a very flat, bland meal.

So my advice if you’re planning to visit is to go for the set menu (much like The Telegraph said, these guys know their stuff, people!) or alternatively, there are so many amazing fine dining restaurants in Edinburgh, I’d push this to the bottom of the list.