The very first event I went along to as a food blogger was at Food at 52, for the launch of a new curry cooking kit from Tastesmiths. At said event, I met the wonderful Liz O’Keefe, food journalist, chef, recipe developer and self confessed ‘fruit and veg geek’. She runs ‘seasonal dinner parties’ and so when I heard she was doing a mushroom themed supper club for homeless charity Crisis, I couldn’t wait to see what it would all be about. The event was hosted at Cafe from Crisis in Aldgate and we were greeted by Liz who introduced the whopping seven course menu (with drinks!) to us. She actually is talking about the food here, and not doing a rather jazzy dance…

Given the seasonal theme of the supper club, the venue and place settings were beautifully decorated with flowers (some of which were edible). 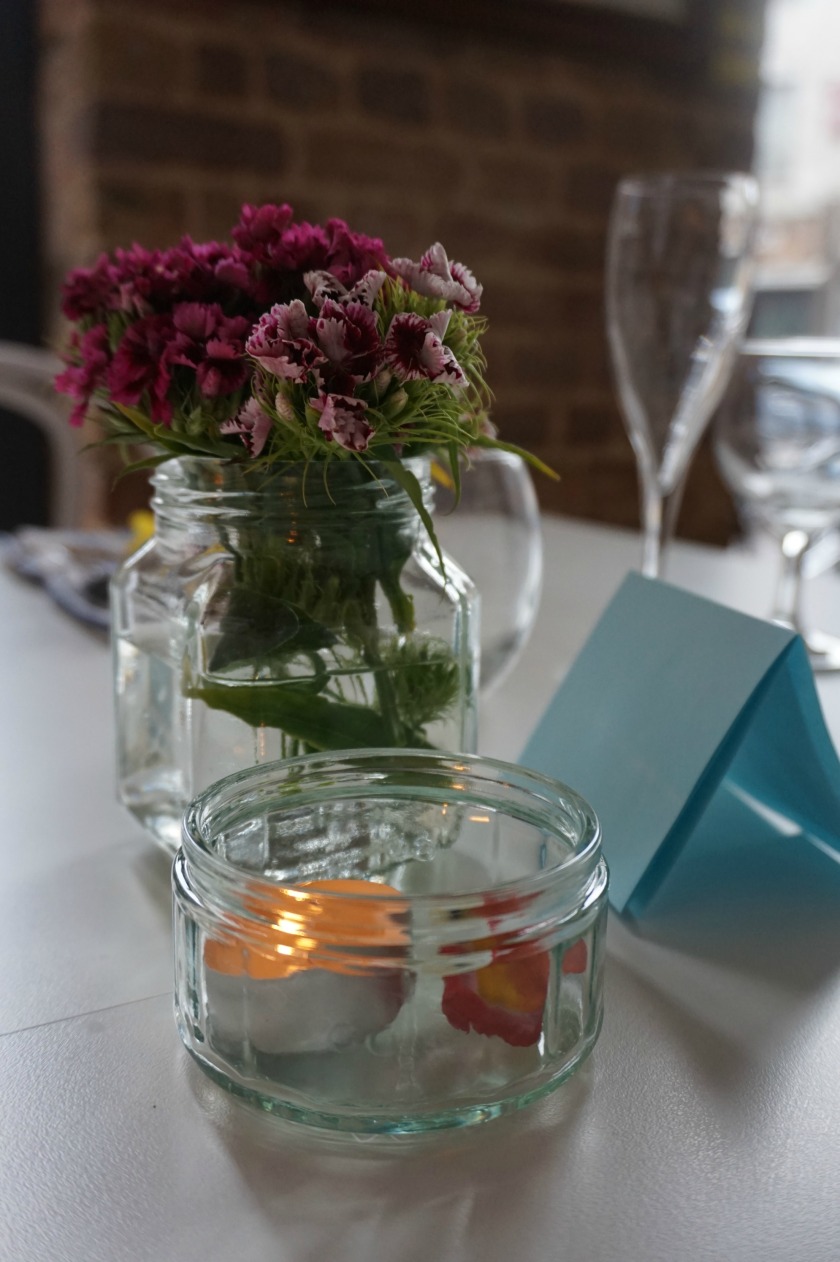 I’ll take you through the courses (note, there were a lot!!)

Strawberry, cucumber flower and cider gin aperitif – the cucumber flowers were from Worcestershire glasshouse facility. The gin was made by a man who was originally a potato farmer (and was behind Tyrrells Crisps), distilled from organically grown cider apples, along with eleven botanicals – all from his farm in Herefordshire, Chase Distillery. It was a lovely refreshing summer drink!

Caesar mushroom and artichoke amuse bouche – all of the mushrooms were provided by The Mushroom Man. And very tasty they were too!

Tomato gazpacho with summer truffle and porcini, with Castle Brook Classic Curée wine – the tomatoes were Kent-grown Thanet Earth heritage tomatoes and the edible flowers (wasabi, violas and a mixed pack) and micro dill were also provided by Worcestershire glasshouse facility. I’m not normally a big gazpacho fan (weirdly, I don’t like the taste of raw tomatoes, it’s the only thing I don’t like!) but this was really nice – the summer truffle and porcini gave it an edge.

Sea garden salad – this seafood salad was gorgeous and the oyster leaves were a revelation – they genuinely tasted like oysters!

I soon realised a trend here in terms of portion sizes – the dishes were all extremely generous portions! Sadly I couldn’t finish all of them, but would have loved to if my tummy would have allowed it!

Main course was honey and apricot roast ham with roasted girolle mushrooms, garlic and apricots on venere rice with a truffle aioli, served with Williams Chase Rosé. This was probably my favourite dish – the ham was delicious and worked perfectly with the black rice. And as for the truffle aioli, I could have poured that over the whole dish, it was fab!

Raspberry and edible flower meringues: as you might hope, there were no mushrooms here (I have no idea how you’d incorporate a mushroom into a pud!) – the meringue was perfectly baked, and beautifully presented.

Cornish Camembert with mushroom flatbreads to dip served with a chilled shot of Chase Rhubarb Vodka – as you know, I’m a massive cheese fan and could probably have polished off this whole camembert by myself, but sadly had to share between four of us (I’m just a cheese glutton!) and it was absolutely gorgeous, I’m definitely looking into buying more of it. The flatbreads felt a bit heavy after such a big meal, I was happy just with the cheese. I really enjoyed the rhubarb vodka, it was unusual and worked perfectly as an end of meal tipple!

Sea salt and porcini chocolate slabs – I mean, would you ever have thought to put mushrooms in chocolate? It sounds bizarre, but it definitely worked – a  bit like a fruit and nut chocolate bar. The chocolate was ex-Peace Corps volunteers’ Madecasse chocolate.

Liz has co-authored a cookbook called ‘The Mushroom Book’ with Michael Hyams (aka Mushroom Man!) which is due to be published by Lorenz Publishing this autumn. This lovely pic is taken from the book.

You can find out more about Liz’s seasonal supper clubs on her website here, and more about Crisis charity here. The next mushroom supper club will celebrate autumn and set to be mushroom-packed (of course) –  the Autumnal Mushroom Celebration Supper Club is on 17th September. Liz is also putting on a small fruit-and vegetable supper club at new bar 68 and Boston, Soho, on 28th July.