You may have read my post last summer about the Moretti Gran Tour in Hackney, a brilliant evening of Italian street food vendors and, as you might have guessed, Moretti beer! It was one of my favourite foodie events I went to last year – it was just so well all organised and all of the food was incredibly tasty and authentic. So when I was invited to go again this year, I couldn’t wait!

This year’s event was held just off Brick Lane in East London and was completely out in the open, so it was pretty fortunate we were experiencing  a heat wave. It was the perfect weather for an event like this – enjoying an ice cold beer in the evening sun. Birra Moretti have recently launched the Regionali Range, featuring Birra Moretti alla Toscana and Birra Moretti alla Siciliana, which was available to sample for the first time in the UK.

This year there were two cookery classes taking place – butchery and pasta making. I did the latter last year, so we booked on to the butchery class (although that would have been my preference anyway). This class was hosted by the awesome team at Forza Win who were great fun! I tried their porchetta at the event last year and it was gorgeous – I’ve been wanting to visit their restaurant in Peckham ever since, but it’s a bit out of the way for us. We must make the time to go! All of their food is grown and reared in the UK, cooked over wood and served across a whole evening. 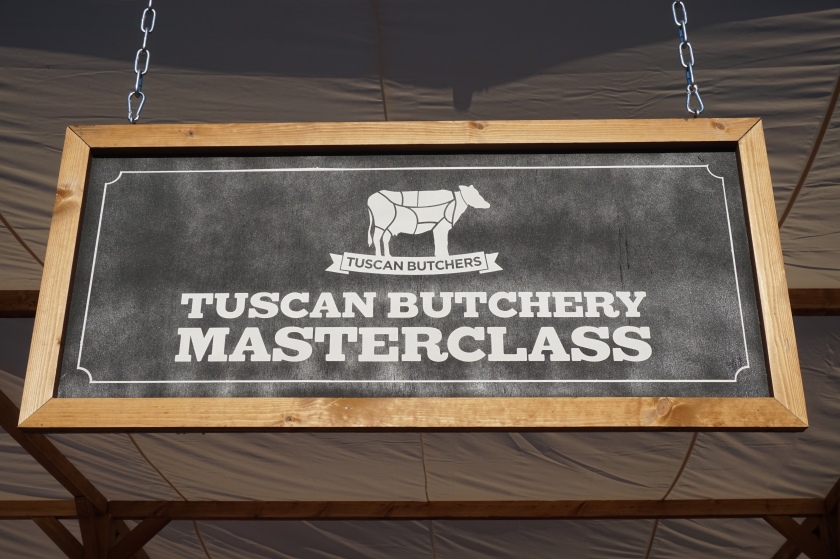 As you might have read on here previously, good quality meat and how it’s butchered and cooked is very important to me (find out more on my ‘About‘ page) and I’ve been to a few butchery classes is London now, which I’ve written about on here. I wondered what new things I would learn with Forza Win, but actually I soon discovered it was very different – it wasn’t so much about the butchery, but more about how to cook your steak perfectly over fire, with some really helpful advice and information.

At Forza Win, they like to use rump steak, due to its price, flavour and ‘cookability’, with their favourites being Dexter, Belted Galloway (or Belties) and Longhorn, and their rump is aged for 48 days. 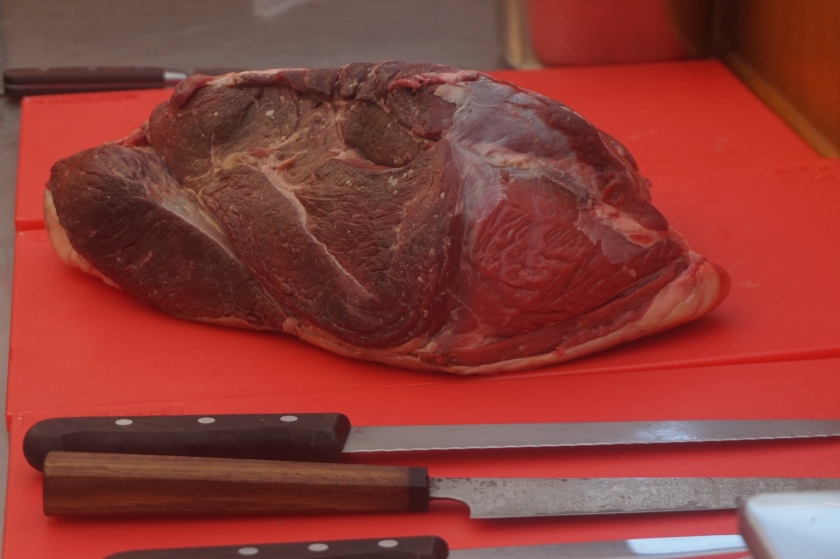 So what became very clear, very early on, was that the quality of the fire you’re cooking over is key. Here are some quick hints and tips they provided:

At this point some people within the group had a go at chopping the rumps into smaller steaks for us all to eat, guided by the guys at Forza Win, which were all well seasoned with salt (not pepper – this just burns!) 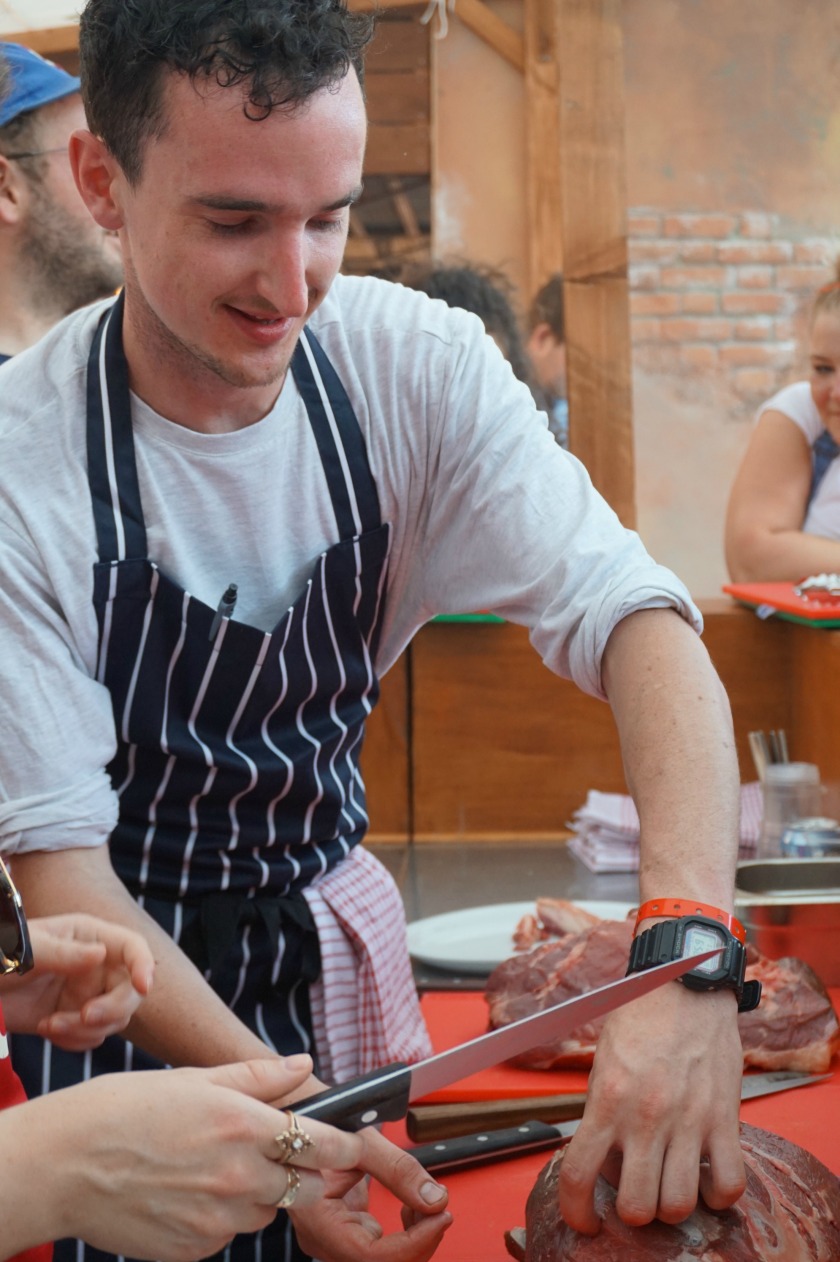 And it was now time for the most important bit – the cooking! We were split into three teams to cook across three fires, and I was very excited to learn we were being instructed by Mark Parr, founder of London Log Co (aka Lord Logs!) who has built most of the wood fired grills in UK restaurants.

And he has provided his own hints and tips (you’re learning from the very best here, people!) 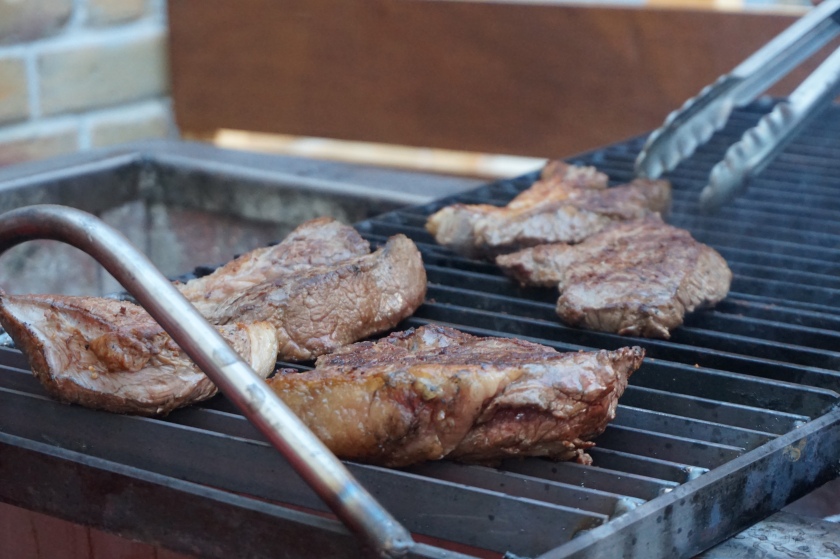 We also prepared a salsa verde from scratch, finely chopping and blending together parsley, basil and mint with olive oil, salt and pepper.

And then it was time to eat! We were advised to cut into strips, season with pepper, and drizzle the salsa verde over the top. YUM! It was such an enjoyable class, so a big thanks to everyone involved in putting it all together. 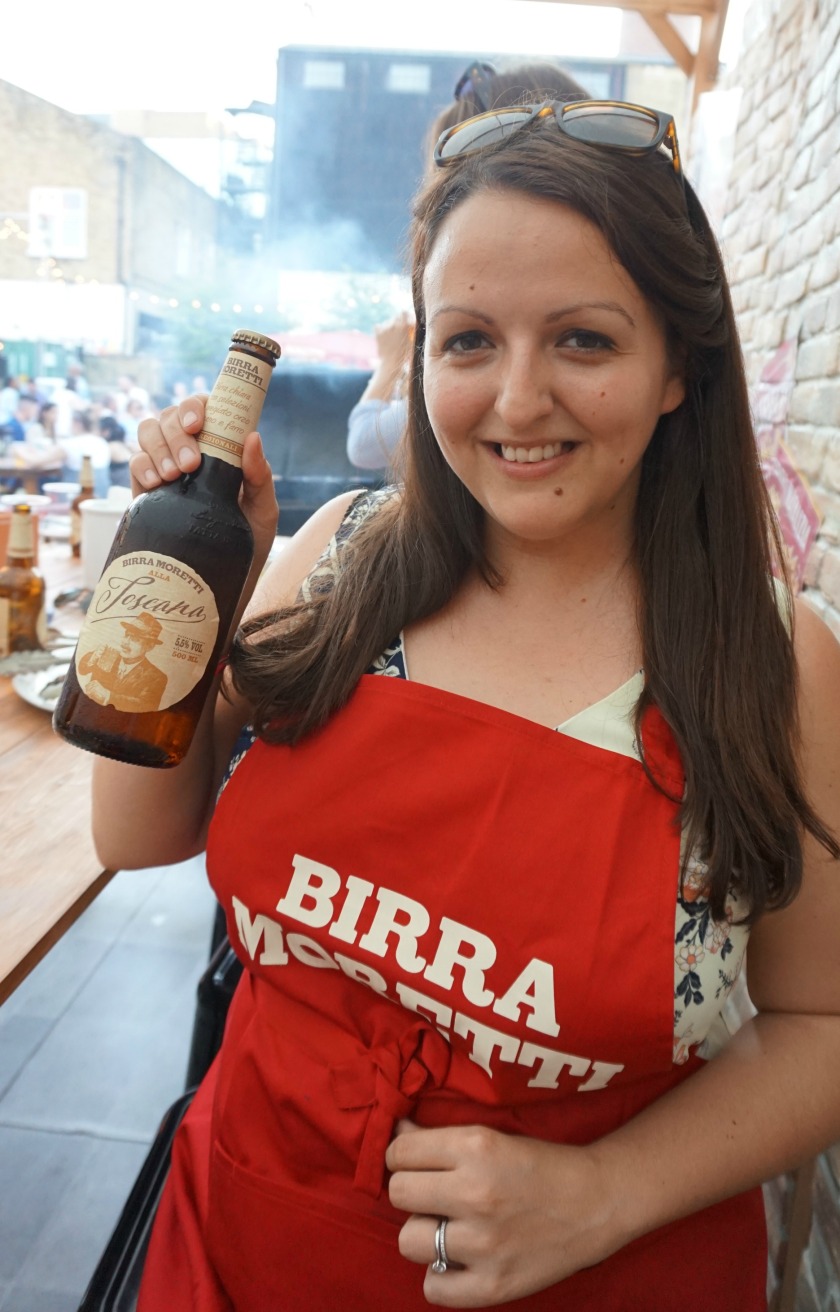 In terms of the food being served by the street vendors, Tim and I thought we’d try as many dishes as possible, so in some cases we shared dishes. What I really like about this event is that it’s not too big, so it doesn’t feel too overwhelming knowing which dishes to try (and experiencing street food FOMO!) There’s still plenty of variety though. Here’s what we tucked into…

We started with pasta from The Cooking Cooks.

They were serving cherry tomato, basil sauce with spinach linguine, and slow roast pork ragu with poppy seed pappardelle, so we went for one of each. The pasta was perfectly al dente, and the sauces were both rich and delicious. 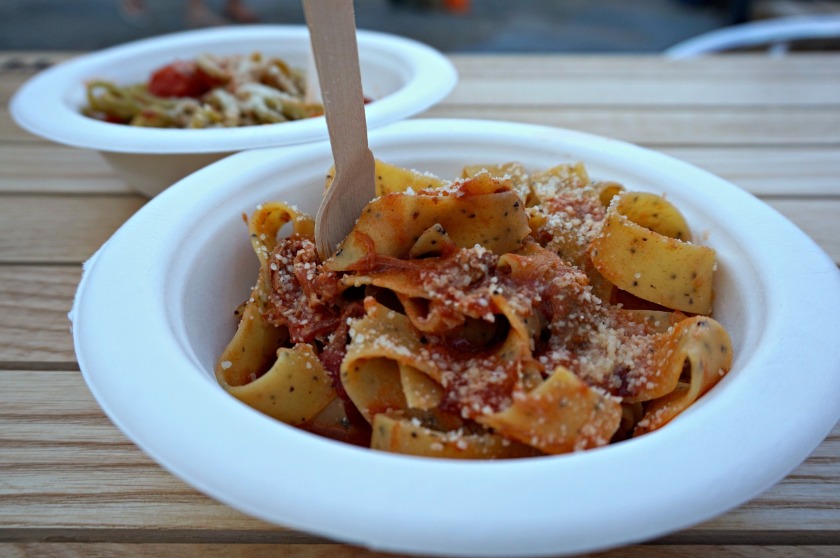 Next up was Lamb Cutlets from Tongue N Cheek.

There was quite a long wait for these, which was a bit frustrating, but I did meet a guy with possibly the best tattoo ever!

The lamb cutlets were a little bit tricky to eat in this kind of event environment – the wooden cutlery wasn’t really strong enough, so it was a case of gnawing away – a bit messy but very yummy! 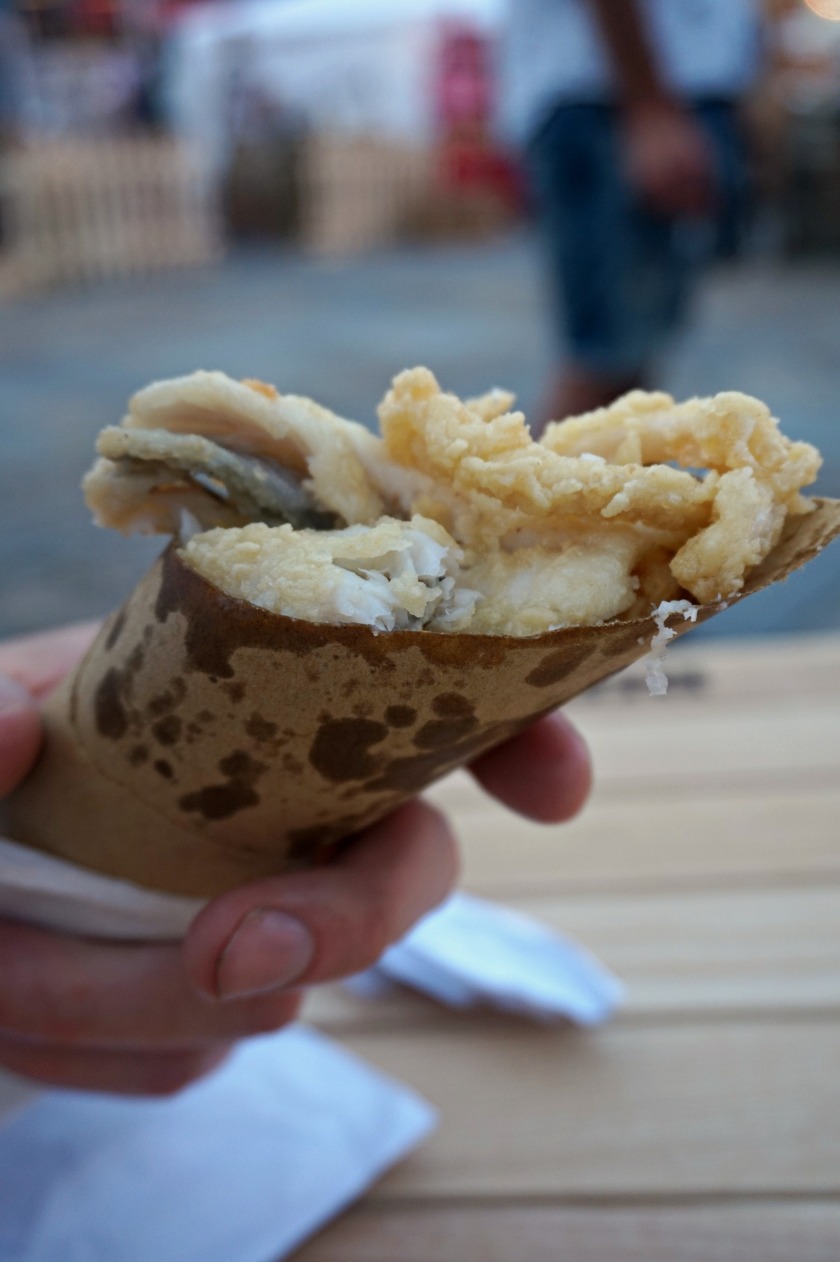 This was such a simple dish but it was fantastic – perfectly battered and seasoned – it felt like a genuine little taste of Italy.

By this point quite a few beers had been consumed, so it was time to soak up the beer with some pizza – a simple Margarita from Pizza Pilgrims.

It was just as good as I’d hoped – I’ve been to Pizza Pilgrims quite a few times now, it’s probably my favourite pizza chain in London. The pizzas are big but don’t feel heavy and stodgy like certain other pizza companies.

You can find out more about Birra Moretti on their website here and make sure to keep an eye out for next year’s event, I can’t recommend it enough! It’s free entry too, so you can soak up the atmosphere for nothing, it’s just up to you how much you want to spend on food and drink. But trust me, going from experience, you’ll want to try a LOT!

I was invited to review the Moretti Gran Tour by Birra Moretti and Cow PR but did not receive any payment. All views are my own.