We recently travelled to Sorrento in Italy for my good friend Kelly’s stunning wedding, with so much love, laughter and you will be pleased to hear, excellent food! We were only in Italy for the weekend so we wanted to fit in as much exploring as possible – we’d visited Sorrento a few years ago before I started the blog, which included a day visit to Amalfi and Positano. So this time we thought we’d try somewhere new which we didn’t get around to visiting last time – the beautiful island of Capri!

It’s a 20 minute ferry ride from Sorrento port, for approx 18 Euros each way (not exactly the cheapest ferry ride for that length of journey, but worth it!) 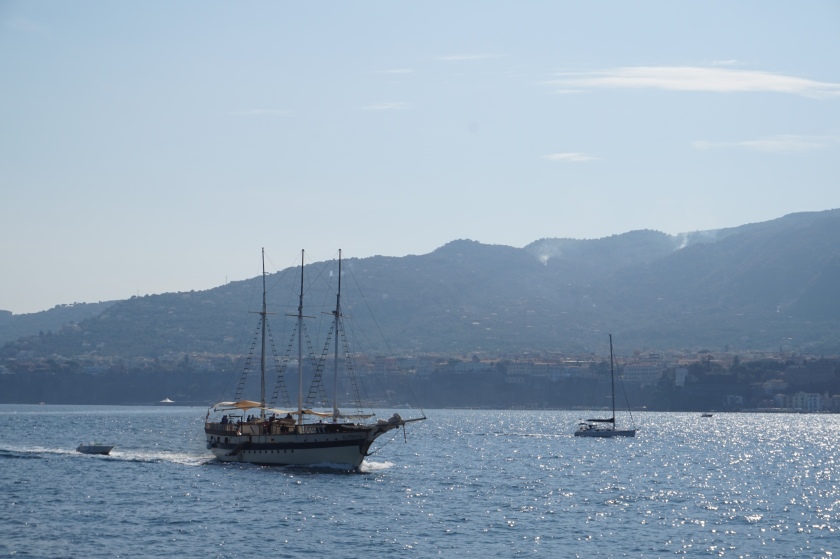 The arrival into Capri is quite a sight to behold, with the green hilly backdrop behind, and the seafront dotted with cute multicoloured shops, restaurants and boats. There’s certainly lots to explore on this island with quite a few hotels – lots of people were turning up on the ferry with big suitcases, splitting their holiday between mainland Italy and Capri. The island is also split between the main areas of  Capri and Anacapri – neither of which I’d say are easily walkable from the port, so you need to look into transport options, such as the Funicular, scooters or taxis. One of the guests at the wedding said they’d walked to Capri old town and very much regretted it!

We took the funicular up to old town (approx 2 Euros each way), which we had to queue for, for about 15-20 minutes – it was lunchtime on a Saturday after all, so to be expected! The journey only lasted a matter of minutes, but we were glad we did it when we saw how steep the incline was. And it was an amazing view at the top!

The funicular takes you straight to the main square of the old town, buzzing with cafes and people watching the world go by. 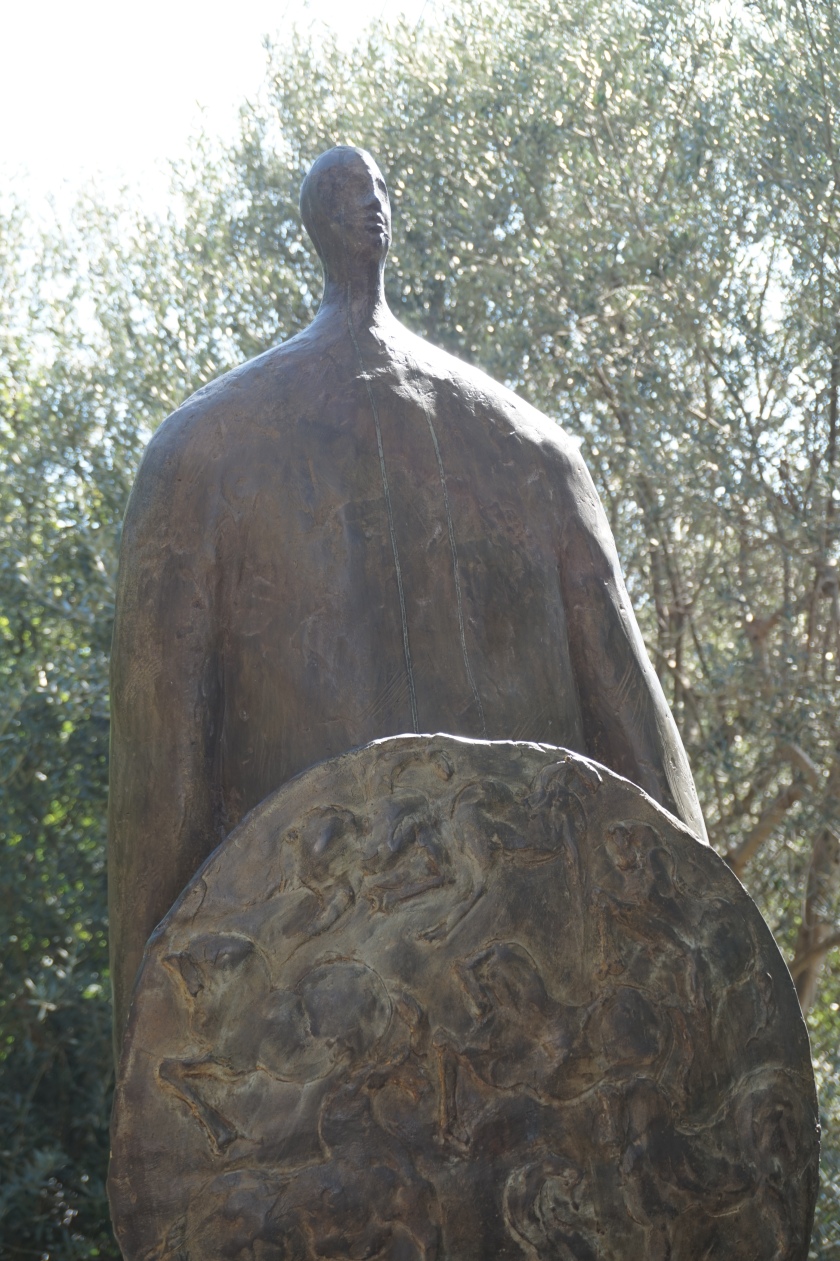 Leading off the square are countless quaint cobbled streets, lined with designer boutique after designed boutique. You could spend a LOT of money in Capri! I wasn’t quite in the market for a £1,000 pair of shoes, but I did stumble across a little ceramic bell shop, as you can see in the photo below, which I thought was adorable, and it had a very cute story to go along with it:

“Once upon a time a little shepherd lived in Anacapri and he was the poorest among the poor children of the place. His only wealth was a small, ramshackle house that he shared with his mother, a widow, and a tiny sheep that he used to pasture on the slopes of Mount Solaro.

One evening as it was getting dark the child lingered to pick up flowers and when he turned around to call the small sheep he could not see her anymore. He felt a pang of pain in his heart! It was his best friend and companion, all that he had in the world. The boy searched and searched for his sheep, fearing it had stumbled from the rocks into the sea. Then, suddenly, he heard a bell start to ring in the distance and impulsively ran towards it. His tiny bare feet flew careless of the pebbles, of the thistles and of the night already fallen… until he got to the edge of a ravine.

A sudden flash of light stopped the boy in his tracks and, wrapped up in a golden beam, splendid on his white horse, San Michele appeared to him, the boy’s sheep by his side with a small, shining bell around its neck. ‘My boy, said the Saint, gesturing to the bell, take it and always follow the sound of it. It will keep you from all danger.’

Since then his life was filled with sweetness and happiness and every one of his wishes was satisfied. On the spot of the apparition a villa was built which was called San Michele.”

Capri is a great spot for people watching – I’ll be doing a separate post about our lunch in Capri, but before we headed back to Sorrento, we went for a drink at the harbour – I had a Limoncello Fizz – limoncello has to be one of my favourite spirits and I just love going back to Italy to get ‘the real thing’. We could have sat there for hours watching the boats coming and going, wondering where people were sailing to and what they were doing. 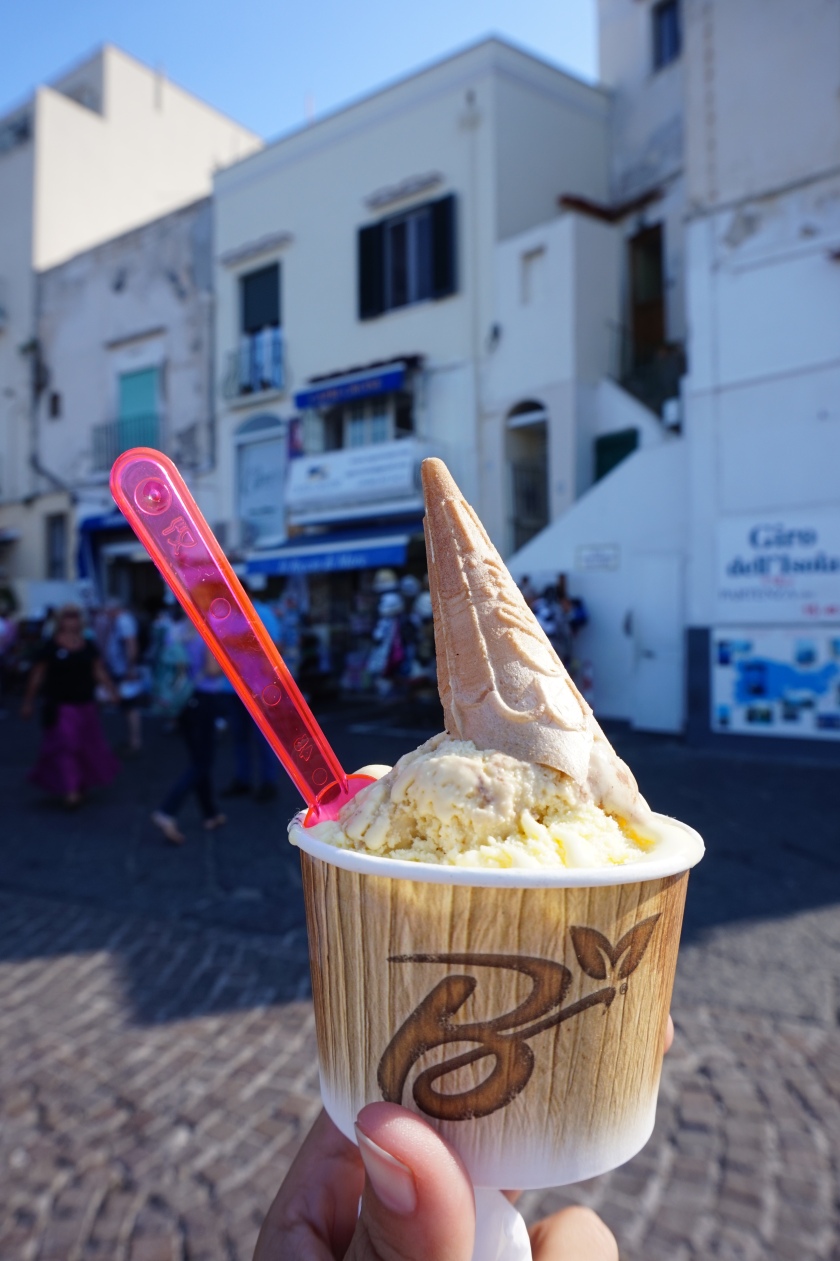 Keep an eye out for my upcoming post about lunch at Le Camerelle. Have you ever been to Capri? What did you think?