Ever since we got a car towards the end of last year, we’ve been looking for places to explore within an hour or two of our house in South London. One of the neighbouring and closest counties to us is Kent, and this has been the location of many countryside jaunts of late. The most recent took us to the coast, in Whitstable.

It took us about an hour and 45 mins to drive there, which wasn’t too bad, and given it was the bank holiday, there was still plenty of parking available. The weather was looking a bit ‘iffy’ to say the least so perhaps people hadn’t risked it. But we did and it certainly paid off, as it stayed dry the whole time we were there – with beaming blue skies at some points.

I absolutely love the sea side. I miss being able to see the sea from my bedroom window in Cyprus, and spending afternoons after school and at weekends lazing on the beach. The British seaside might not be quite the same, but it certainly has some beauties, many of which I’m longing to explore. Whitstable’s beach certainly isn’t what I’d call ‘pretty’, but it’s a fishing beach, and that’s exactly what we were there for – a seafood feast! After a stroll along the quaint high street with lots of cute homeware and antiques shops, we soon found ourselves on the beach having a wander. Although not too much of a wander I might point out, as Tim was wearing completely unsuitable shoes. You can take the boy out of London… 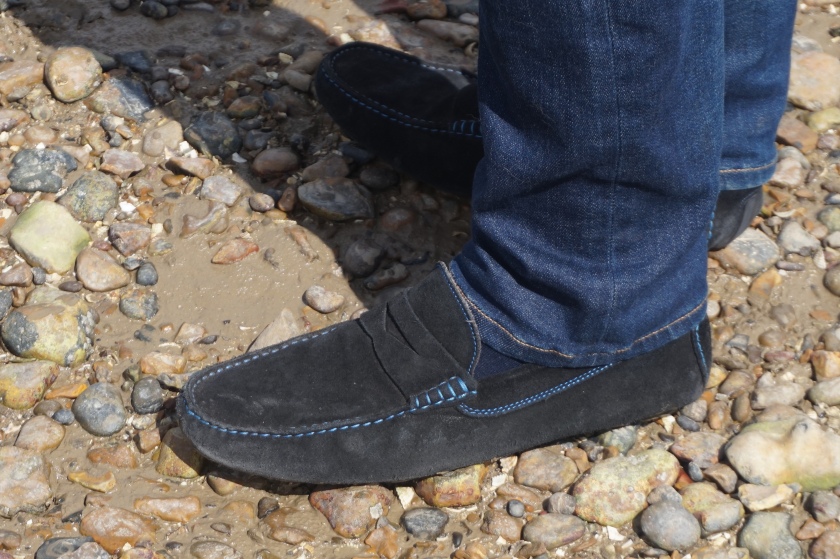 One day he’ll also smile in a photo. I mean this is the face of ‘I hate my life’ (with me laughing at his misery!). I promise you, he was actually having a good time!! 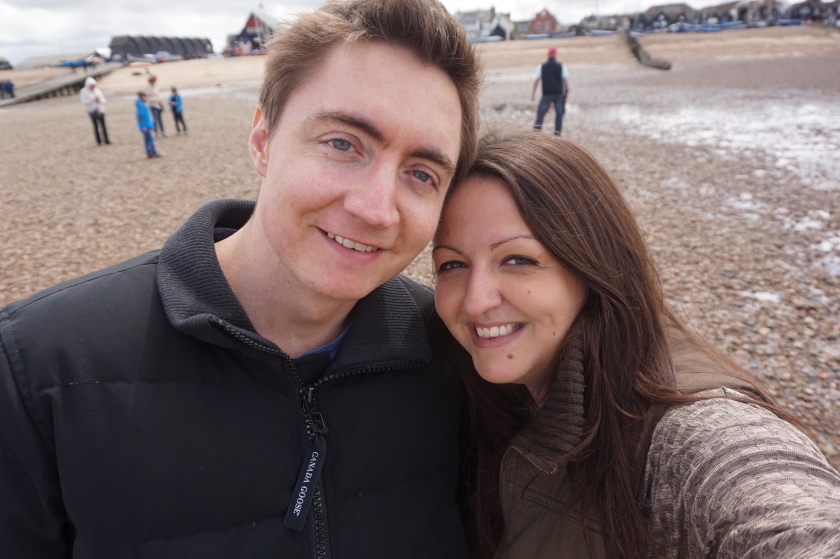 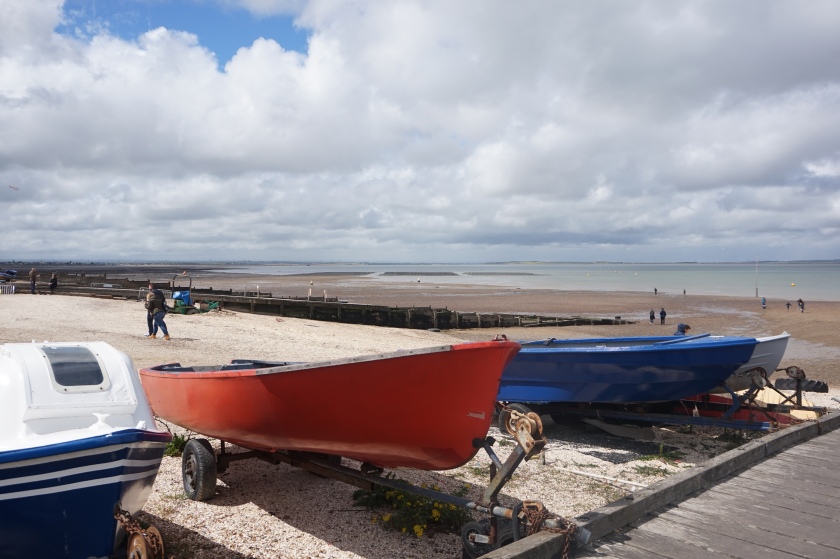 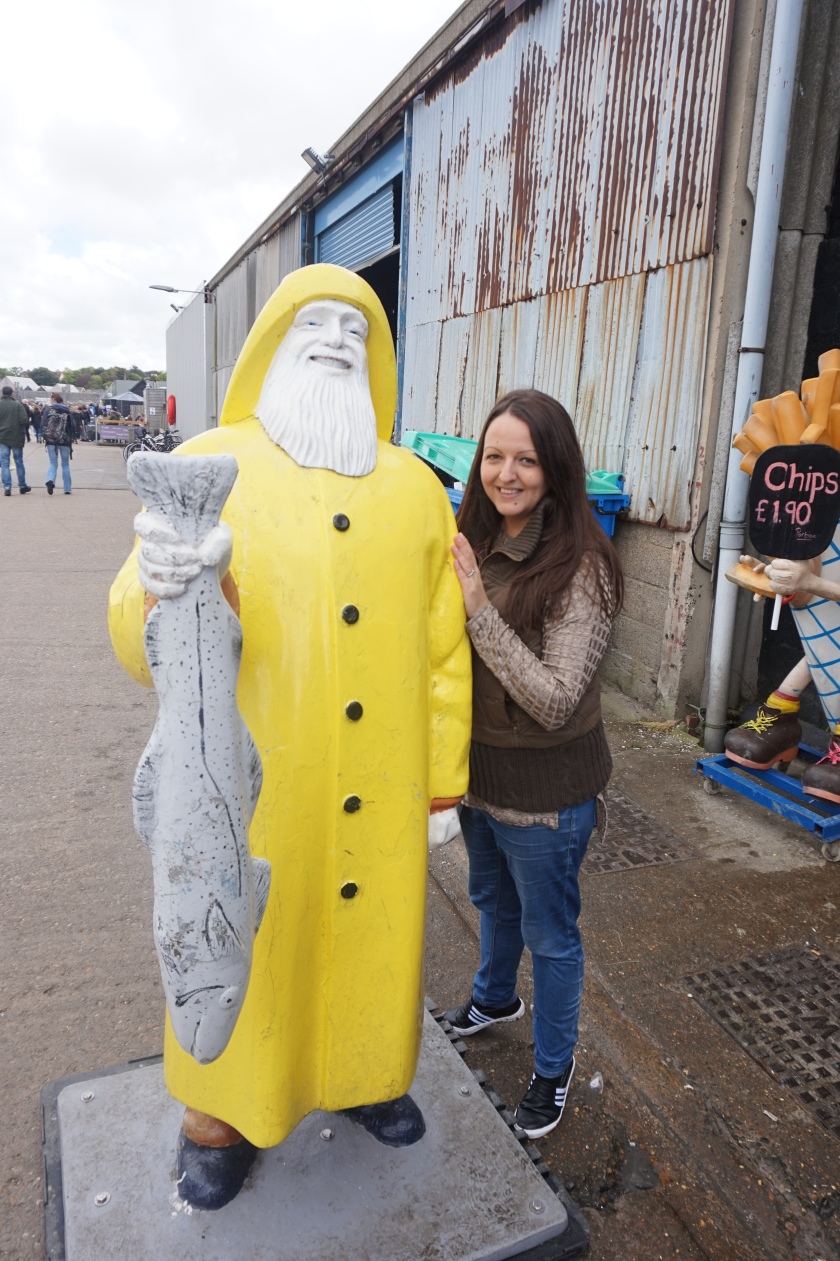 We walked along the sea front and discovered a few stalls selling oysters directly to the public, one in particular with a huge selection of the seafood beauties, and you could actually sit down at tables to eat them and enjoy the view. We’ll definitely do this next time we’re there, they were very reasonably priced and we could easily have gorged on them!!

However we had a reservation at The Whitstable Oyster Company restaurant, which looked great on the website, and we certainly weren’t disappointed when we went inside. The front section has an open plan fishmonger counter where you can buy from them directly, with a scattering of wooden tables where people can come in and order food in a more casual setting. We were seated in the main restaurant area which went beyond just having a nautical theme like many foodie establishments nowadays – it was authentically nautical.

The Whitstable Oyster Company can trace its origins back to the 1400s, making it is one of the oldest companies in Europe, with a long, rich history of farming the famous Royal Whitstable Native Oyster. But as they explain on their website, Whitstable oysters go even further back, almost two thousand years, to when the Romans discovered them and shipped them back to Rome as a delicacy. More recently, and at the company’s peak in the 1850s, it was sending as many as 80 million oysters a year to Billingsgate fish market.

The company set up a large fleet of Whitstable smacks moored off the beach to dredge the oyster beds and the business flourished, but later suffered from cold winters, the two World Wars and the great flood of 1953. Barrie Green and his business partner John Knight took over the struggling Whitstable Oyster Company in 1978, when oyster production had hit an all time low with just one part-time dredger left to sell a few dozen oysters each week week. The next generation in the family, Richard and James Green, opened the fish restaurant in the old oyster stores and commenced production of the now famous Whitstable Native.

Today it is still very much a family-run business and they have created sustainable methods of production that guarantee the oysters’ future. This was recognised in 1997 when the beds were granted Protected Geographical Status by the European Union.

So that’s the history lesson over (but quite a fascinating foodie history lesson, I hope you’ll agree!), let’s talk about the most important thing. The food!

We started with half a dozen Whitstable Oyster Co Rock Oysters (of course!) These were just to die for, and we didn’t even touch the accompanying condiments – they were beautifully fresh.

Although we’re usually rather purist when it comes to the oyster world, we also thought we’d try the Rockefeller Oysters cooked with spinach and cheese as a change.

We were glad we tried them, as they were mighty delicious! The flavour of the cheese admittedly was very strong, but the flavour and texture of the oyster followed through after. I think I might have found my dream ingredient combination – oyster and cheese! Just needs a shaving of truffle on top… my mouth is actually watering…

Moving on to main course. I went for the whole cracked local crab – I love a challenge! All of the meat in the crab was gorgeous and I enjoyed getting my hands dirty and finding every little bit of meat! Even the chips served as a side were perfect!

Tim chose the pan fried local Thornback Ray Wing with butter and capers, which he said was excellent (it looked it, too!)

We didn’t order puddings as we were completely stuffed, but the menu looked great, with a variety of typical English puds, from crumbles to possets! A thoroughly enjoyable   lunch, with excellent service especially considering how busy it was.

As we were leaving the restaurant, we walked right into the middle of a traditional May Day Morris dance – not something you see every day in London! 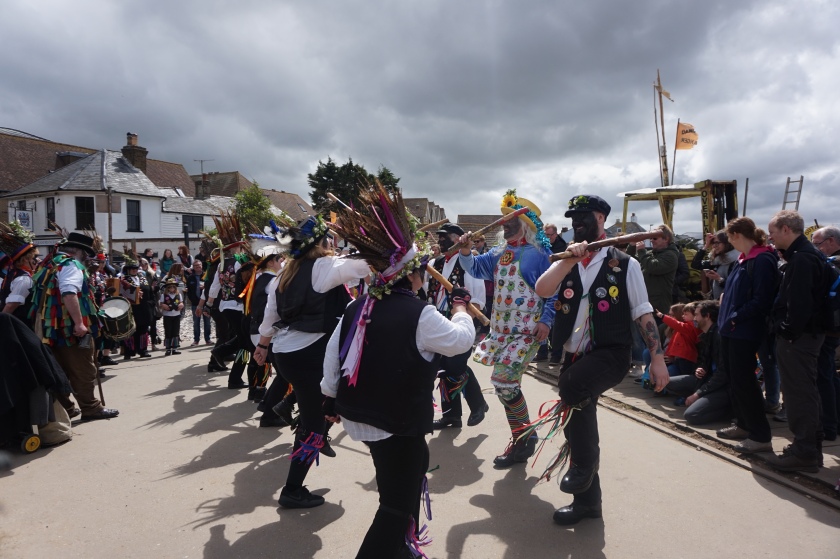 I must admit, I was slightly alarmed at the face painting, but apparently it dates back hundreds of years when dancers in the Welsh borders use burned cork to cover their faces so neighbours wouldn’t recognise them as they begged for money on the streets. You learn something new every day!

If you fancy trying some of that delicious seafood, The Whitstable Oyster Company’s website is here.