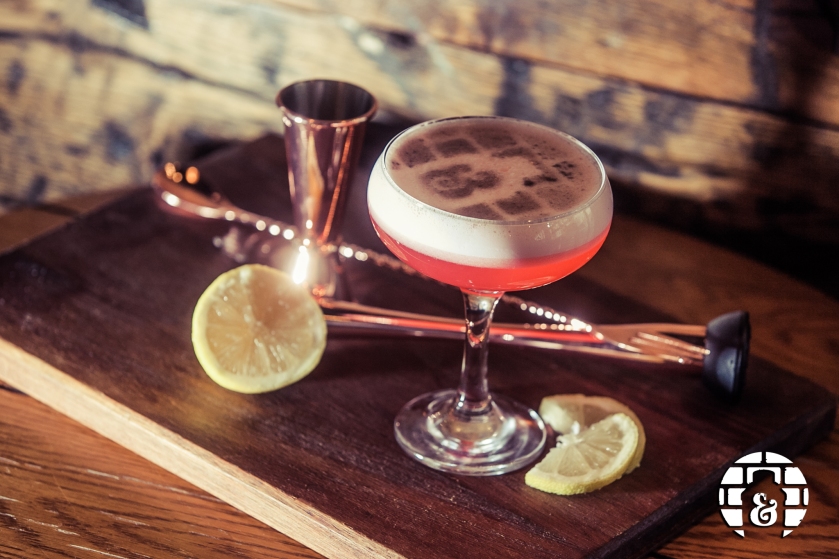 There are more and more new bars and restaurants opening in my local neighbourhood of Tooting, and I couldn’t be more excited by the prospect. One of these is Brick & Liquor. I say it’s new, it actually opened in October last year but shamefully, I’ve only just got around to visiting. I think the reason for this is that I just saw them as a ‘bar’ and I will usually meet friends for drinks somewhere central (very few of my friends live around my area). Tim and I will regularly go for meals in our local establishments but not usually just for a drink (which is why we still haven’t visited The Little Bar yet, also on our list!)

Brick & Liquor is owned by David Layton, who has run venues for major brands across London for 12 years, but this was his first independent venture. Seeing the opportunity in up and coming Tooting, he decided on a derelict spot on Mitcham road, which used to be a news agent which had been lying vacant for two years. And it’s certainly a transformation! The team was heavily influenced by the bar scene in Manhattan’s East Village and this is apparent throughout the design, décor, music and the overall vibe. Along with rustic copper features, original brickwork and warming light, it’s very inviting.

And so, on a very wet and gloomy evening recently during the week, we ventured into Brick & Liquor’s little drinking haven in the heart of our local community.

I was a fan of the menu as soon as I opened it, with a handy graph-style guide advising you on which drinks to choose depending on whether you’re looking for something refreshing or strong, adventurous or comforting.

To begin with I chose the Salted Caramel Old Fashioned – Buffalo Trace Bourbon, Salted Caramel, Angostura Orange and Angostura Bitters. And an actual brownie!! This is instantly a winner for me, what’s not to like? Tim went for a classic martini which he said was excellent.

We ordered some food and as I hinted at earlier, I really wasn’t expecting a huge amount of the food as I saw this very much as a typical ‘bar’, but I was very impressed (and felt bad for my silly assumptions!) The dishes are designed to be sharing plates to nibble on – we decided on the Carnivore Platter which included Teriyaki Steak Skewers, Chicken Lollipops, Pincho Moruno Lamb, and Rum & Coke Ribs, served with their home roasted focaccia and dips. We also ordered some fries on the side.

Every item on the platter was delicious, beautifully cooked (and plenty of meat on the bones) and each with a rich sauce.

I’m not usually a fan of Aperol but I loved the sound of all of the other ingredients – I’m glad I took the risk, because it was beautifully put together, with a great kick from the chilli. Tim went for another classic martini. I did warn him he was being a boring reviewing partner but he’d had a rough day, so I didn’t think it was worth arguing!! He said he was perfectly content with his martinis.

Brick & Liquor also has several special events throughout the week. #WineWednesdays offers a guided three glass tasting of three new guest wines supplied by their local independent supplier, for £12. On Thursdays they host an informal Cocktail Club where you can make and drink their trademark concoctions while you sit at the bar. And on Saturday they kick off the evening with unlimited Treviso Spumante prosecco from 5-7pm when purchasing food, for £20 per person. Booking is advised for all of these events – this is a cosy little venue, with limited seating.

On Friday and Saturday nights, the team carry on until 2am, with local DJs playing disco, funk, hip hop and house. That might be a bit much for us if it’s just the two of us (unless we can lure our friends further down the Northern Line!) but we’ll definitely be back to tuck in to some more meaty goodness, washed down by a refreshing cocktail (or five!)

I was invited to review Brick & Liquor but did not receive any payment. All views are my own.