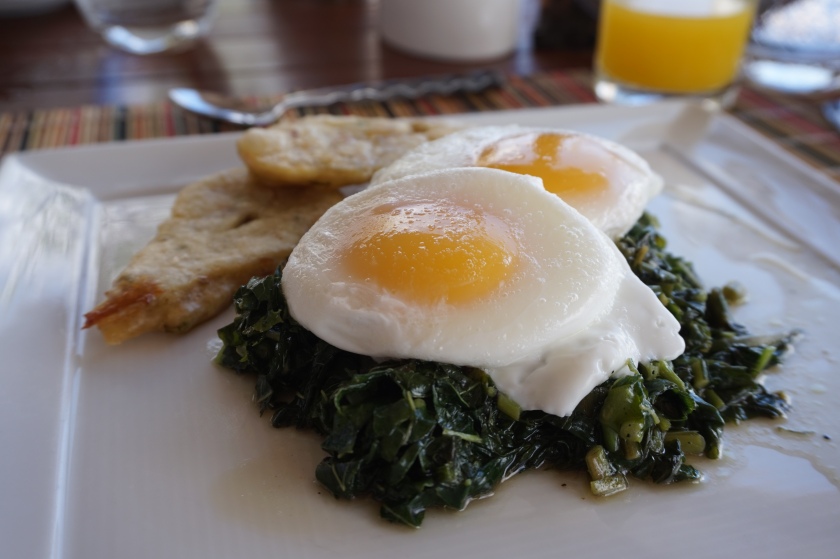 I still catch myself daydreaming about the soothing sound of the waves gently hitting the sand, a reggae music beat in the distance, with a rum coconut in my hand. Our visit to Jamaica was a few months ago now, and it’s starting to feel like a wonderful dream. You can read about our stay at the superb Goldeneye here, if you haven’t already. But this post is about all of the fantastic food and drink that the Jamaican resort has to offer.

Goldeneye has two restaurants within the grounds – The Gazebo and The Bizot Bar. I must admit, I was a tiny bit concerned there might not be enough variety, especially as we weren’t really planning to venture out of the resort in the evenings – we wanted to relax right where we were and not have to travel far. But I needn’t have worried, because both of these restaurants offered everything we needed, and more!

The Gazebo, located on the left hand side as you enter the resort, before you cross the impressive bridge, is built in a tree house-style, serving up dishes with an international flavour. Overlooking both Low Cay Beach and The Lagoon, Goldeneye’s website describes The Gazebo as ‘the sexy, open-air spot to enjoy cocktails while watching fiery Caribbean sunsets‘ – I couldn’t put it better myself! In addition to the treehouse style, it also has nods to James Bond and the books’ Jamaican heritage through the decor. 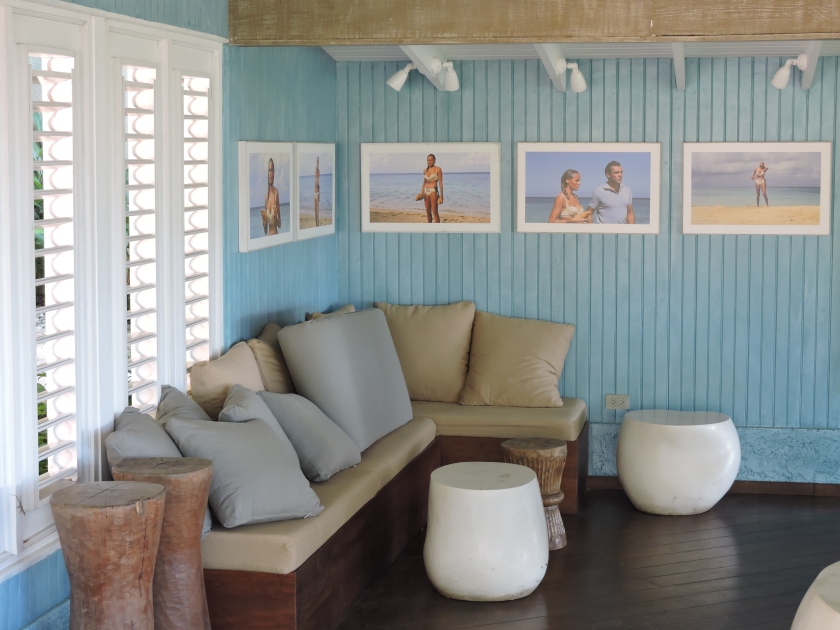 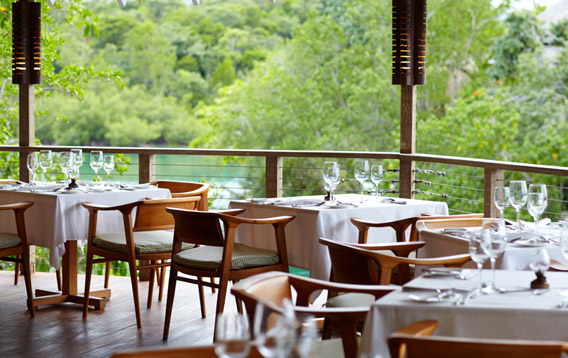 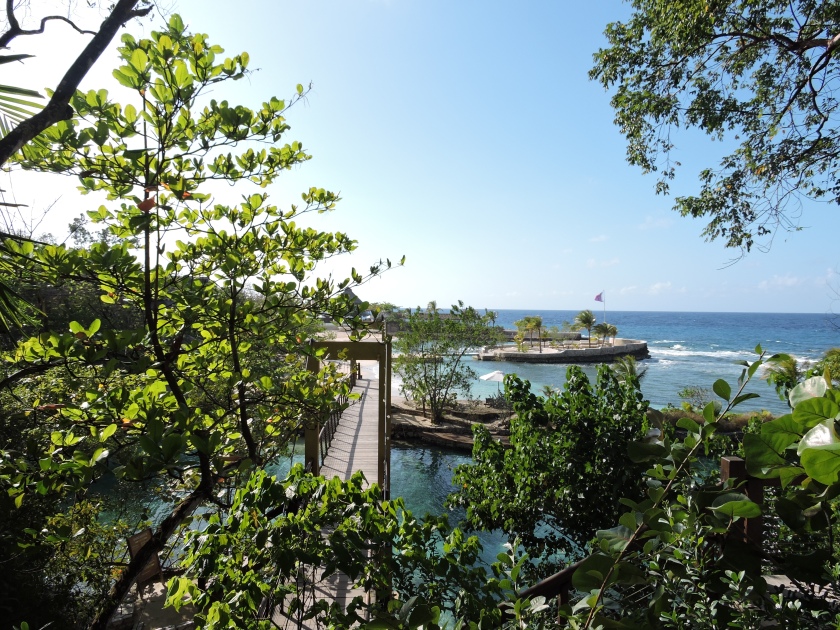 The Gazebo offered us a wide range of dishes including soups, salads, pastas, grill, seafood and of course desserts, many with a Jamaican touch. The menu at this restaurant doesn’t change from evening to evening, but there was plenty on there to offer variety throughout your holiday. My favourite dishes in the restaurant were the Creamy Jerk Chicken Ravioli in a Coconut Cream Sauce, the Island Steamed Shrimp Skillet and the Mango Brioche Bread Pudding with Scotch Bonnet Ice Cream – heaven! 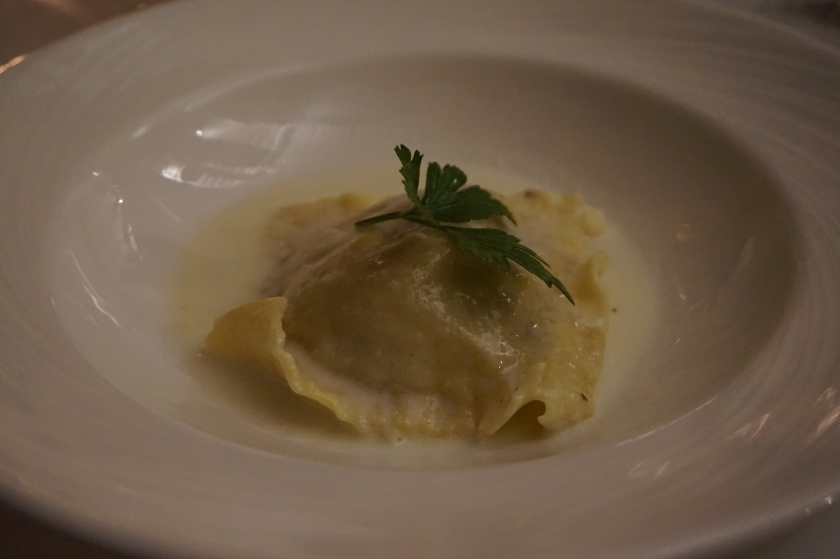 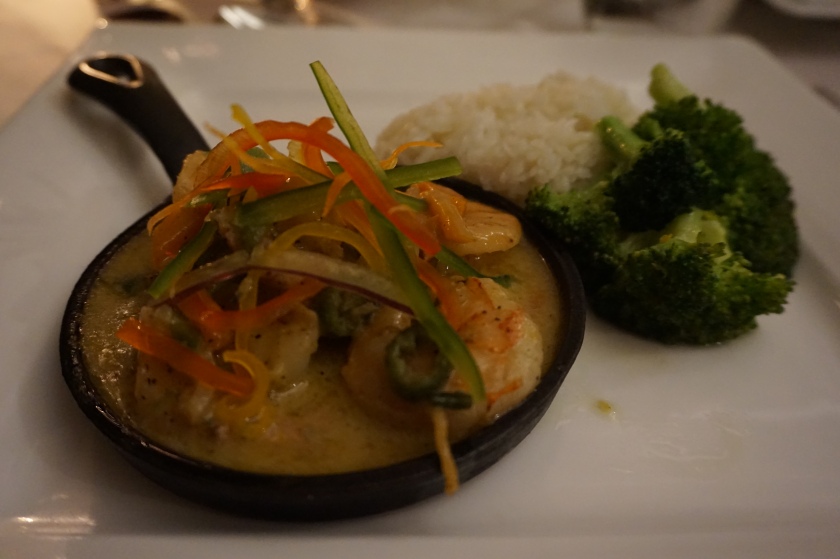 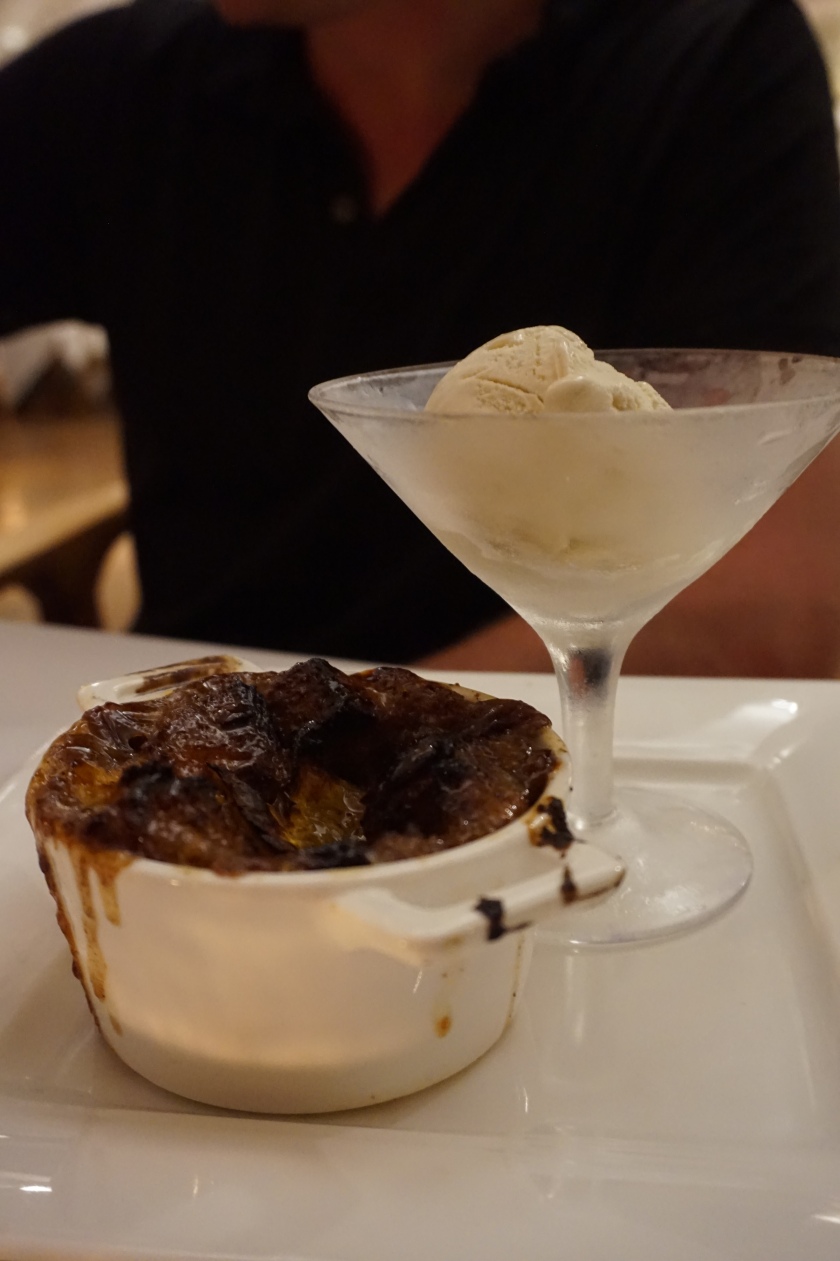 While The Gazebo was only open for dinner, the Bizot Bar was available for breakfast, lunch and dinner, located just steps from the sea and swimming pool on the western arm of Low Cay Beach, and named after the French counter-culture connoisseur, Jean-Francois Bizot (1944 – 2007). A journalist and music tastemaker, Bizot founded Radio Nova in Paris and introduced World Music to French audiences. 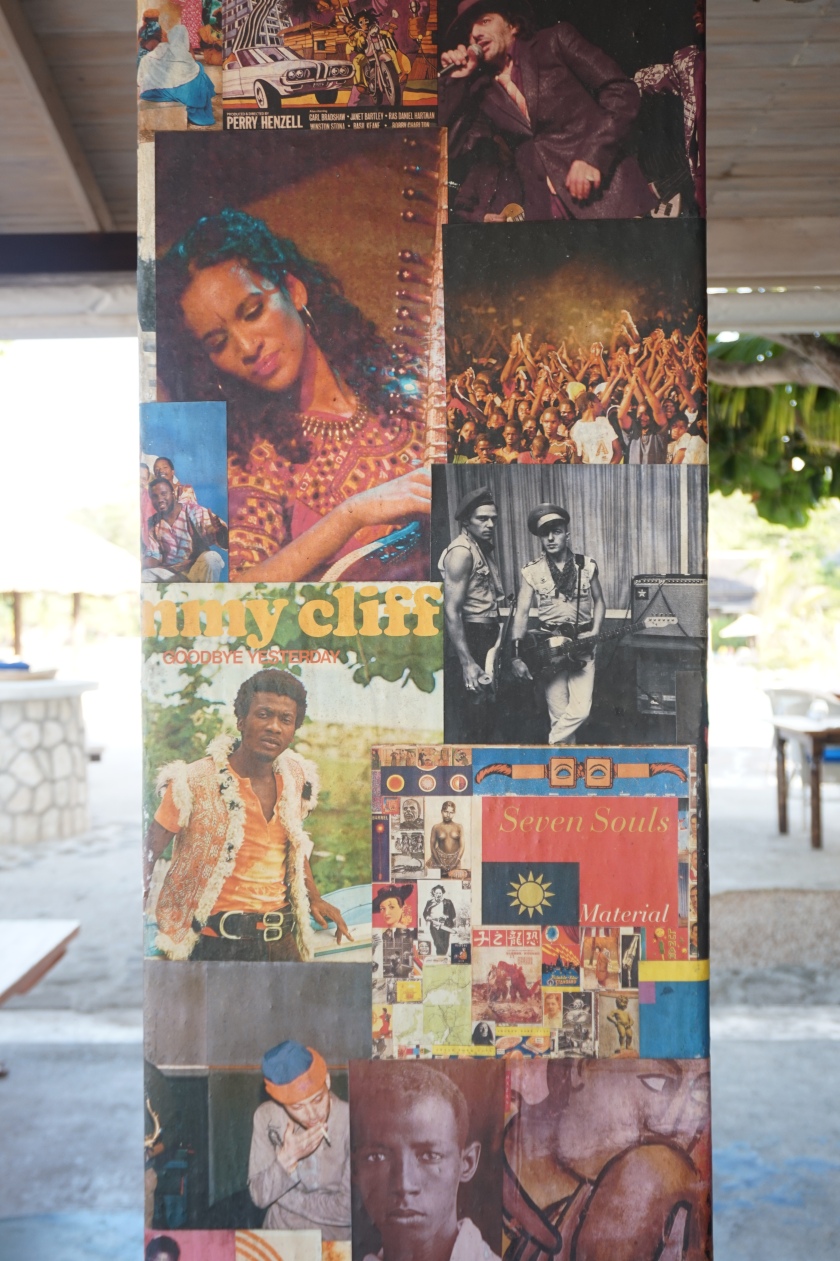 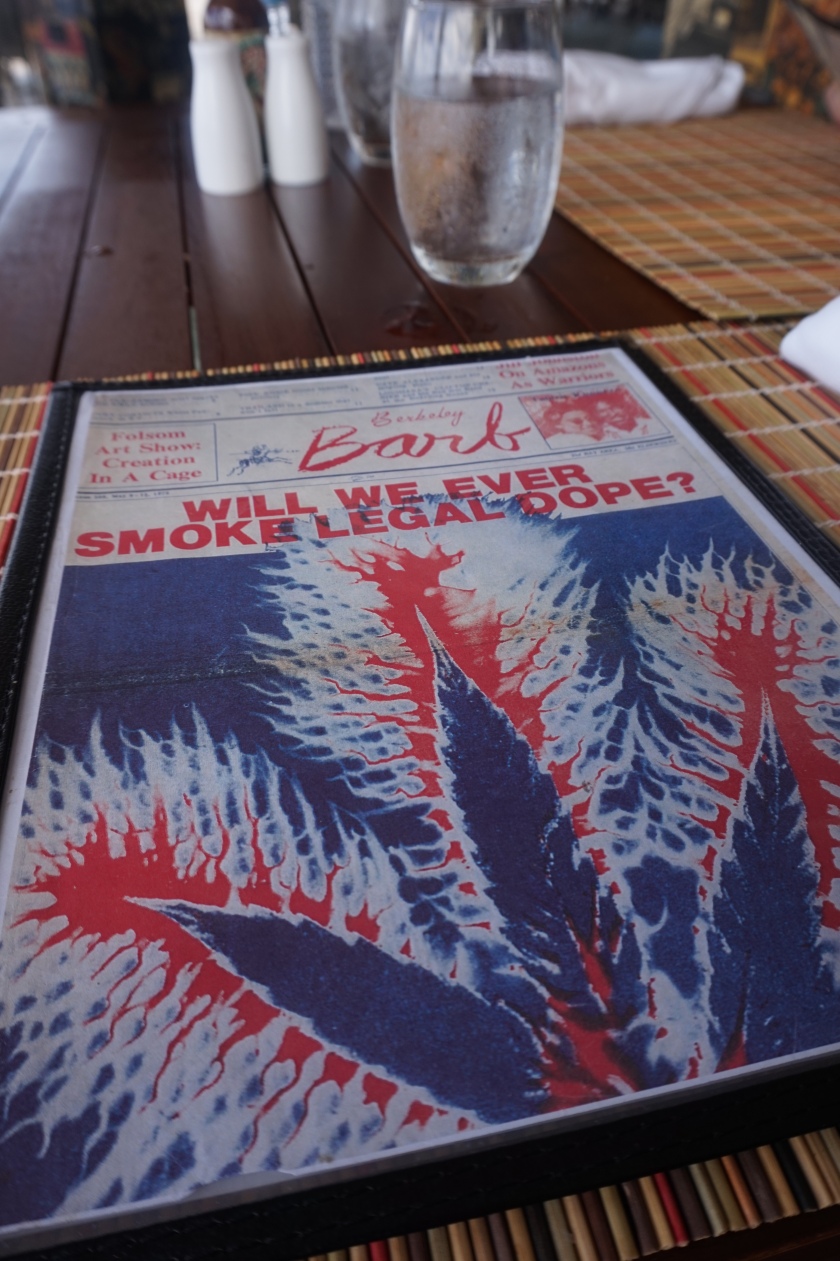 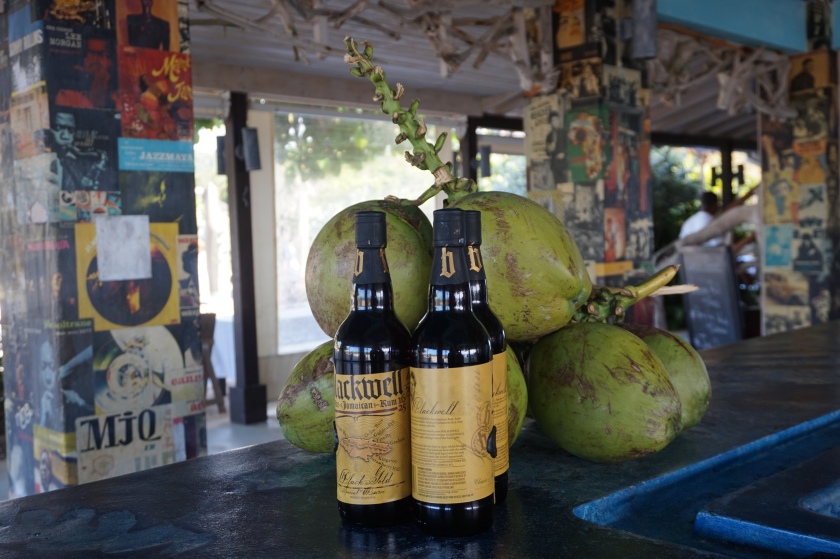 This was one of my favourite places to hang out at Goldeneye, just chilling at the bar, sipping on one of their many excellent cocktails – their Pina Colada, while rather retro, was superb. 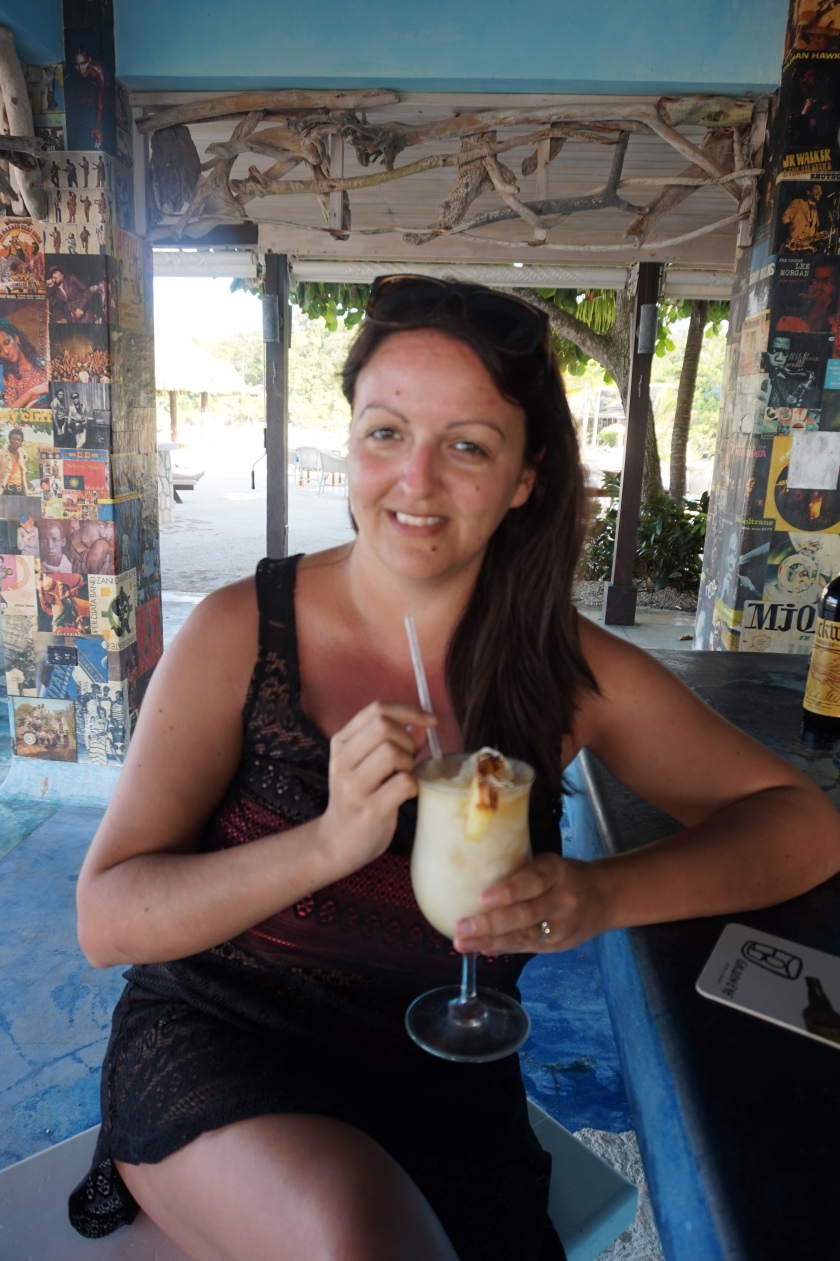 But this wasn’t just a bar – the food was equally good. It was a delight to wake up in the morning and get excited about breakfast. This was no run of the mill buffet which you often encounter in even the smartest hotels around the world, but waiter service and a wide choice of dishes. I tried as many as I could throughout our time at Goldeneye, including french toast, waffles and muffins, but both mine and Tim’s favourite was the Pantrepant Breakfast – steamed callaloo (a bit like kale) with poached eggs, topped with country pepper drizzle, with a side of salt fish fritters. 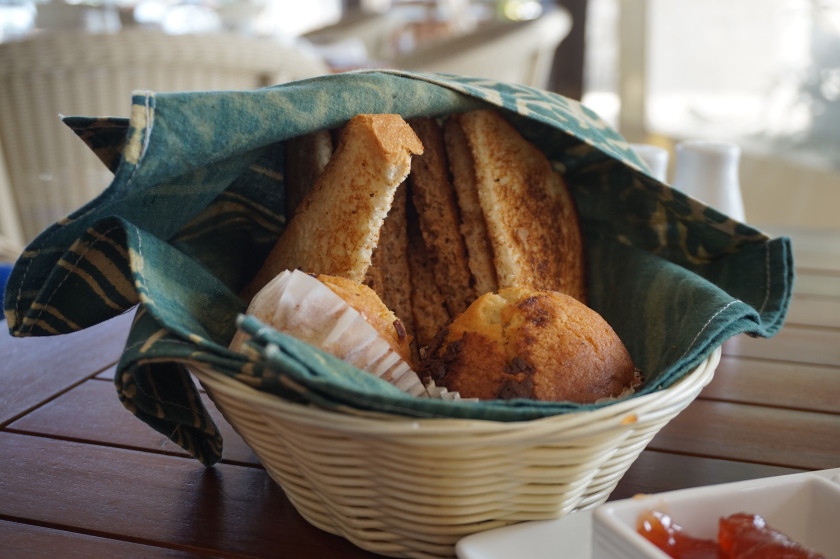 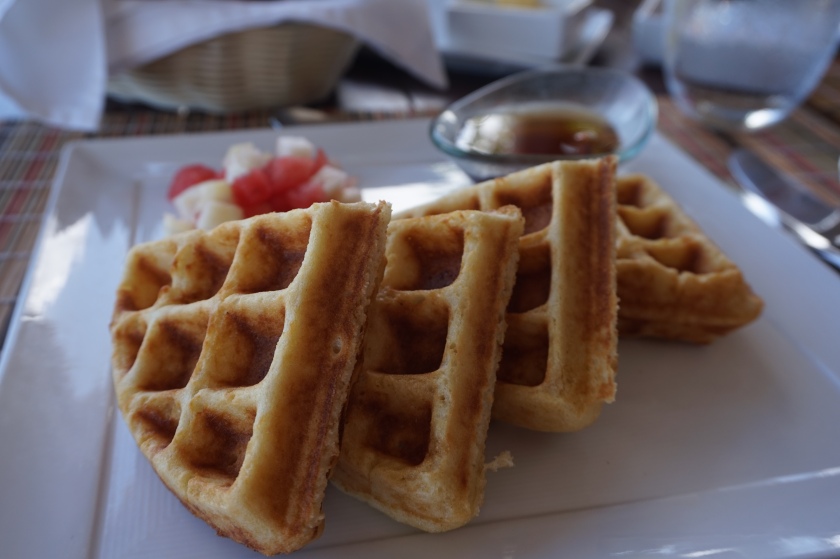 After a few hours of letting breakfast settle and bronzing ourselves on the beach, it was soon time to return to Bizot for lunch, which was a completely different menu again. Each day there were specials with a local flavour, such as jerk chicken, curried goat and lobster roll. And there were more desserts on offer here, such as baked banana in honey and lime served with coconut cream sauce. Pure, wonderful indulgence! 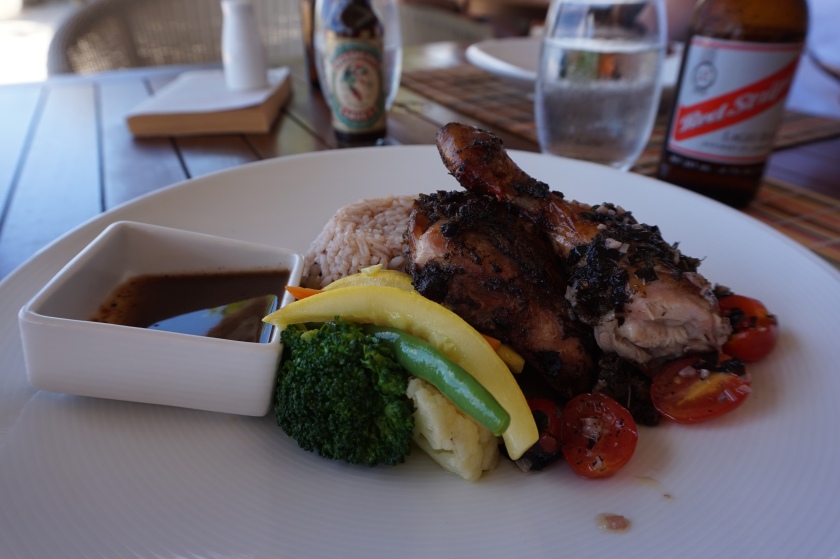 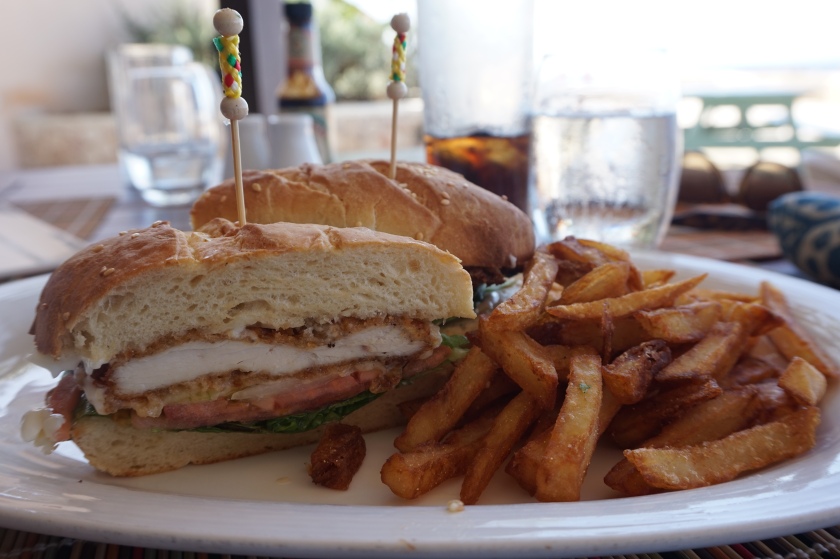 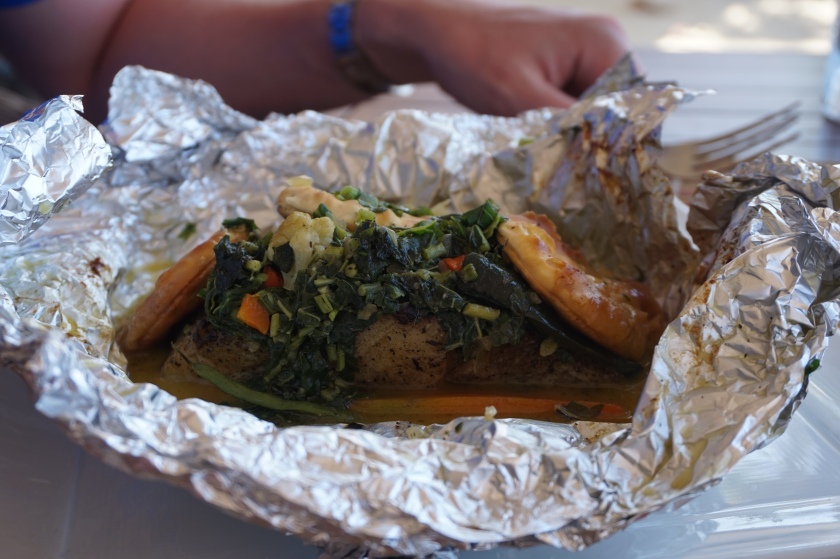 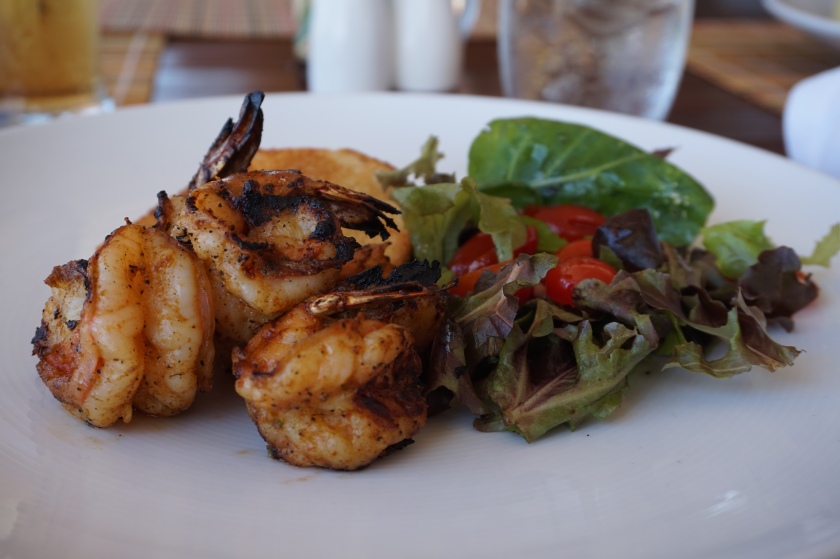 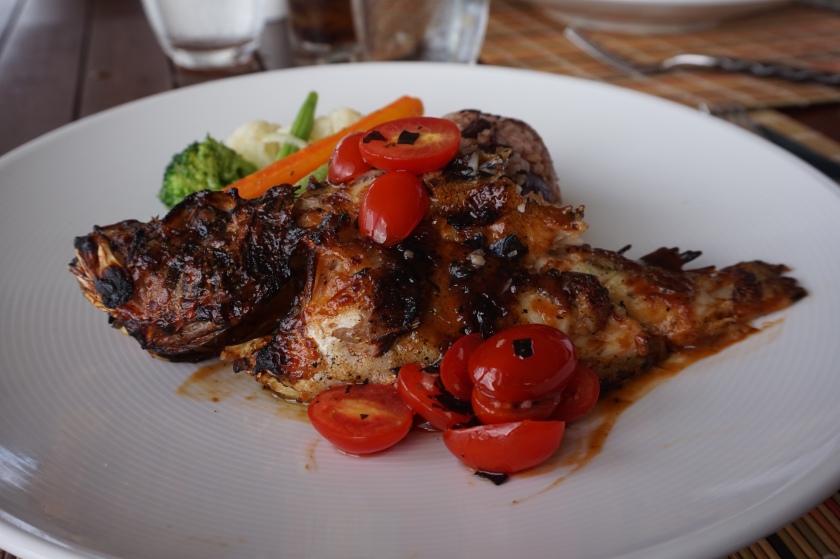 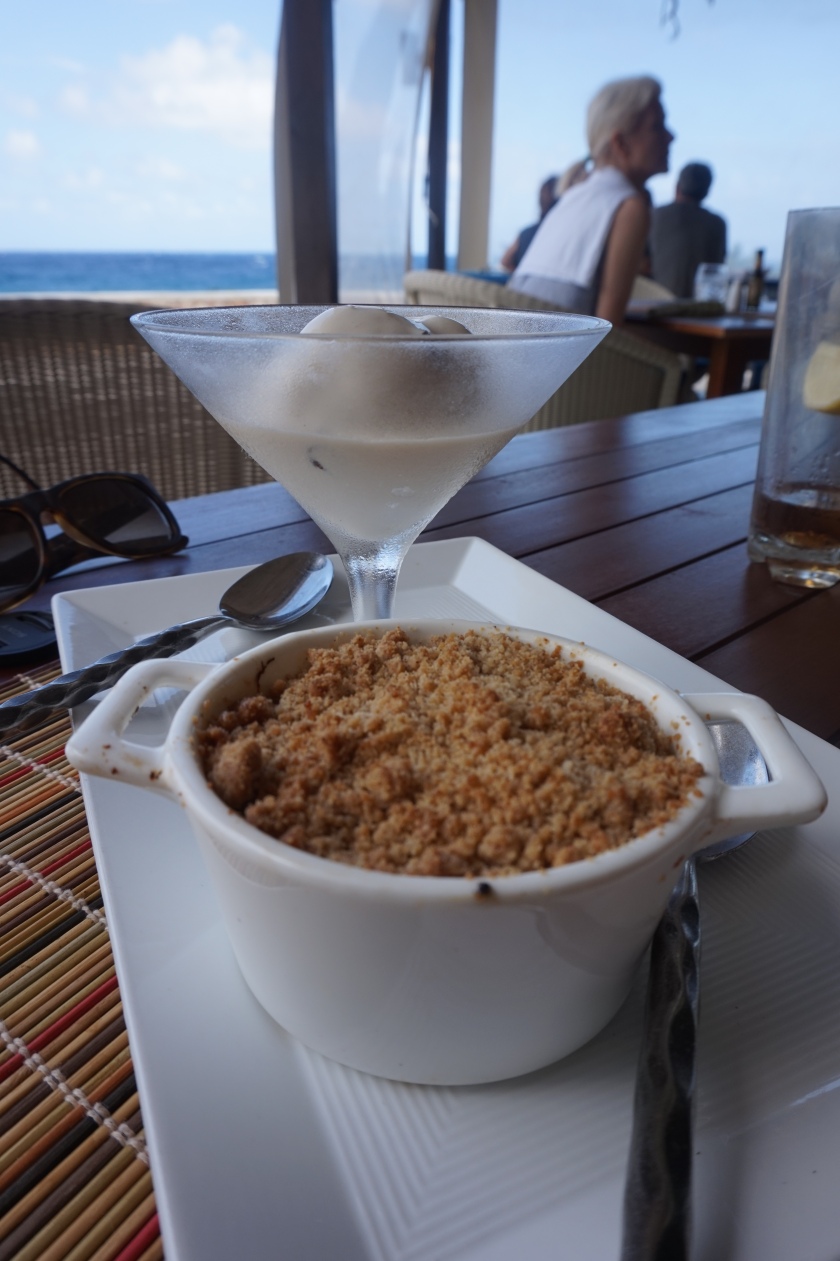 We also fell in love with the Pickapeppa sauce – we brought home a couple of bottles! 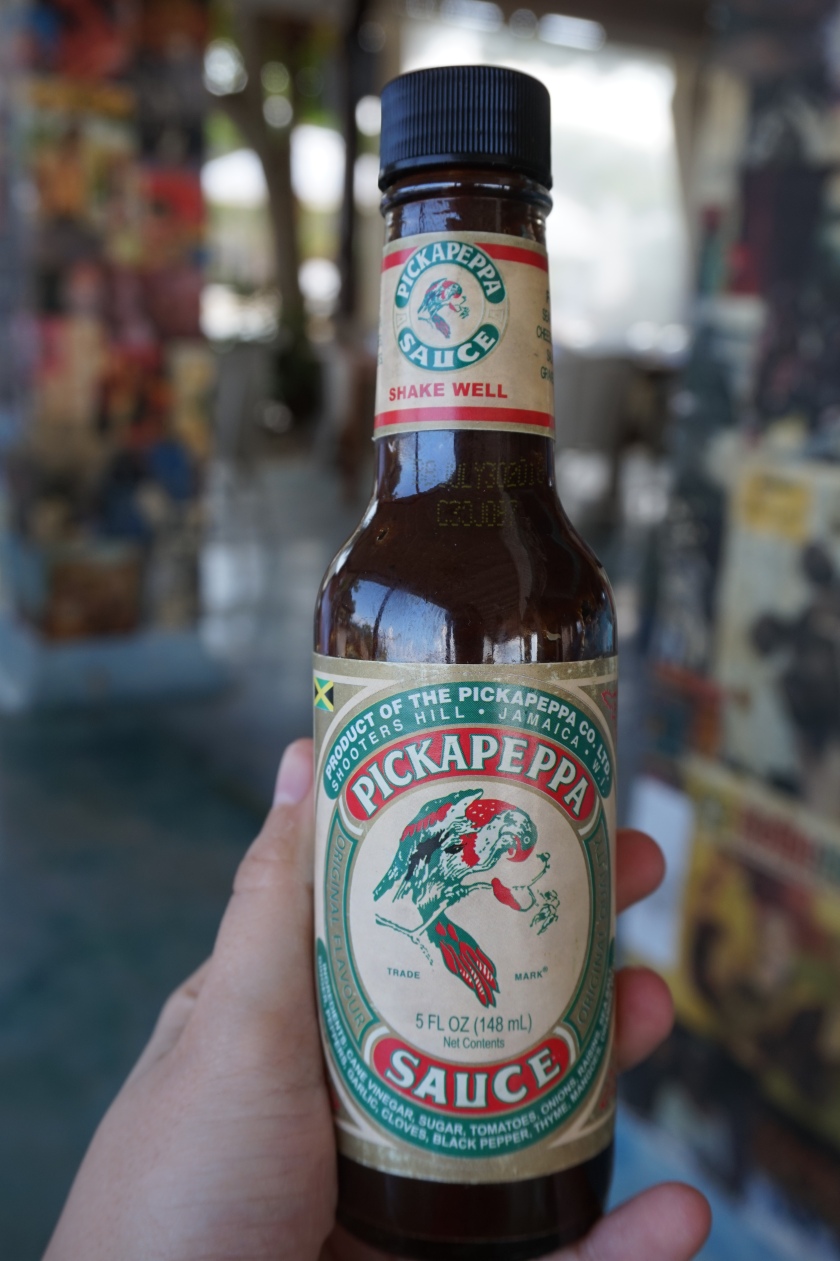 You might have thought we’d get bored returning to the same restaurant in the evening, but on the nights when we visited Bizot Bar rather than The Gazebo, there was always a special menu or experience.

One evening we were treated to a Japanese evening seated right out by the sea, with a completely different (and large) menu with lots of choice across both Japanese food and drink, including sushi, teriyaki, sake and lychee martinis! 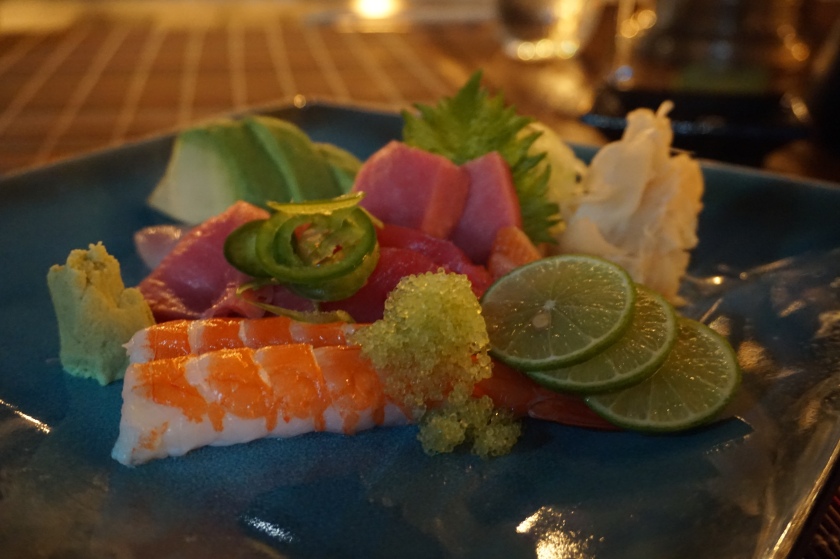 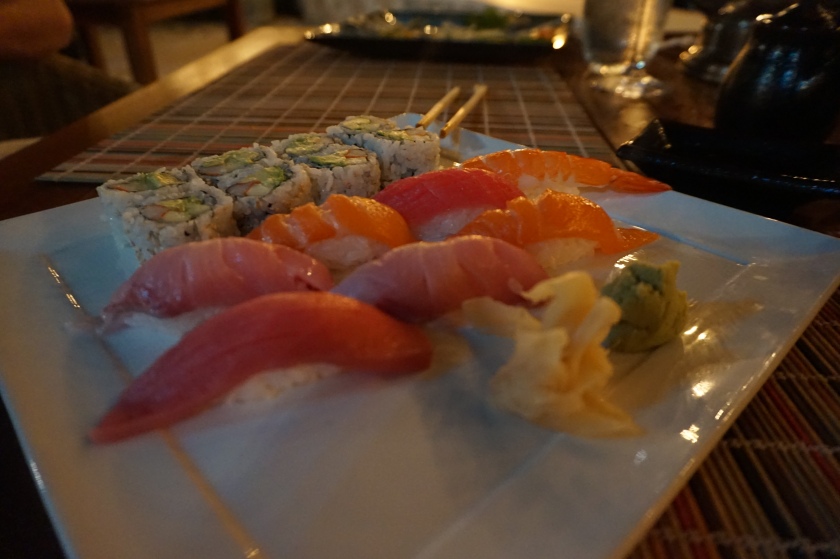 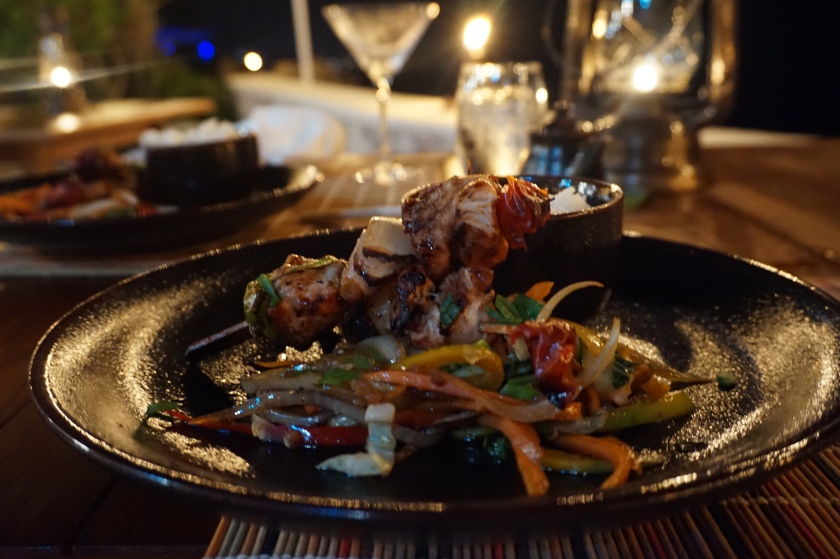 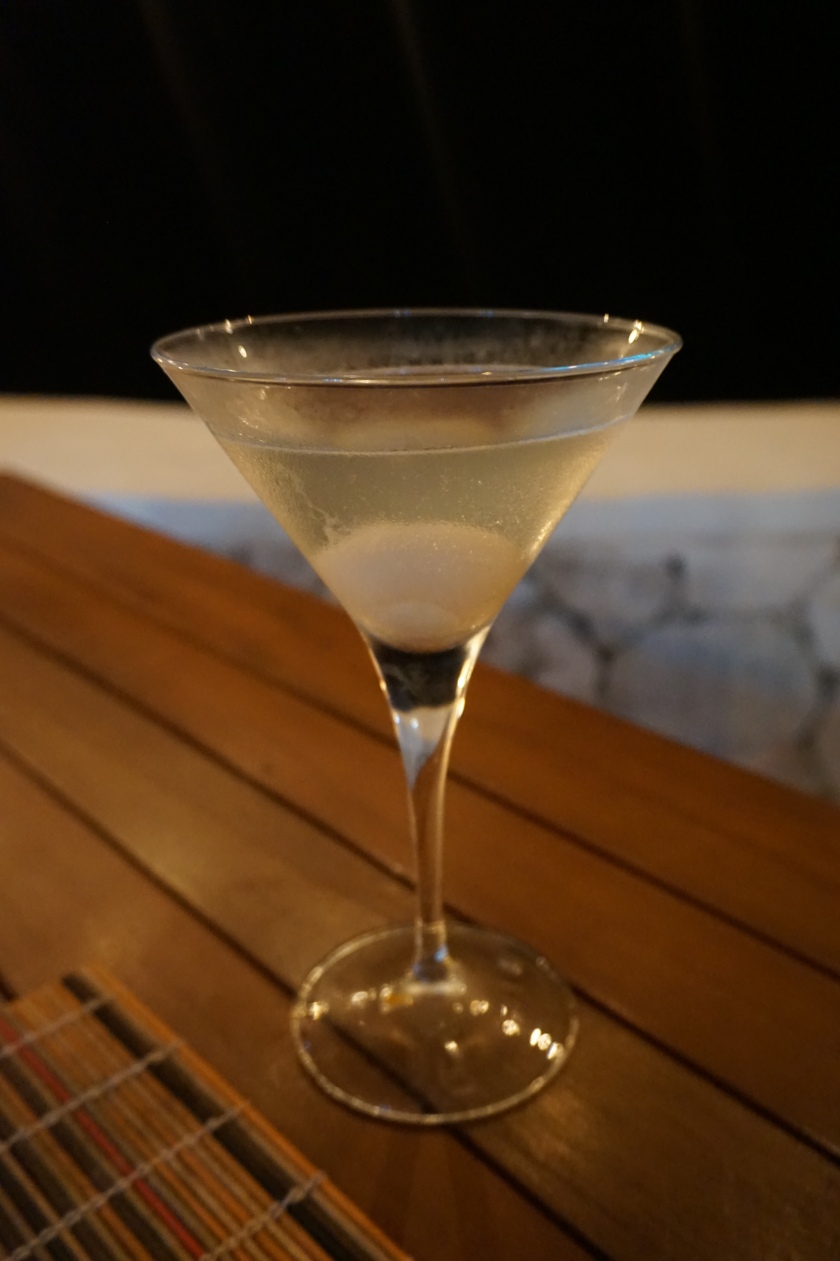 On another evening there was an epic barbecue with any meats, vegetables and salads you could possibly want. 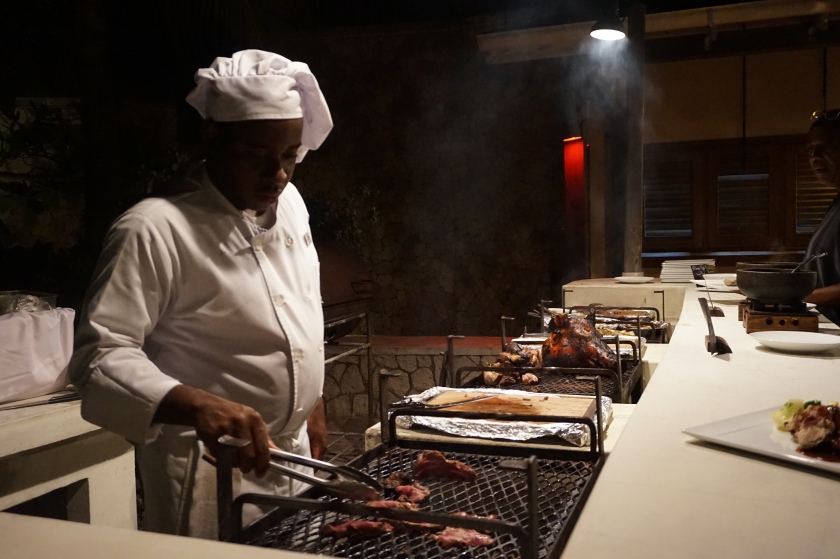 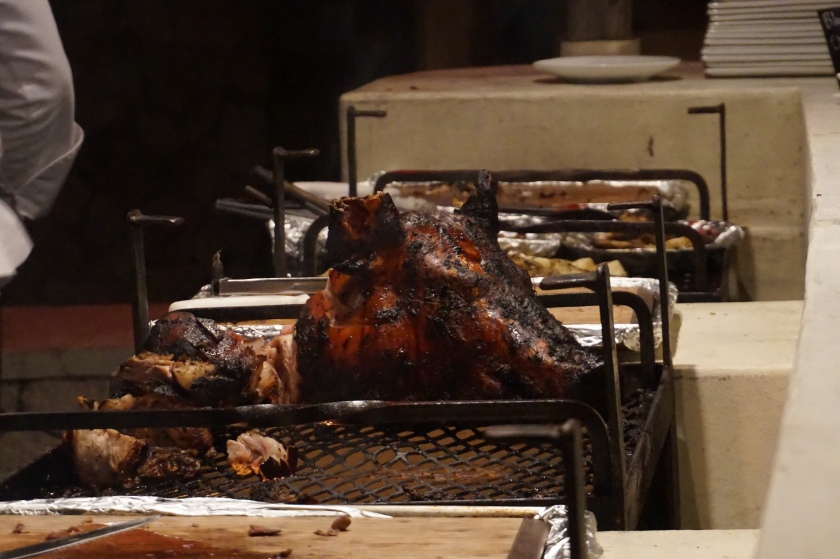 I’d been on a strict diet before the holiday but I can safely say I put back on any weight I’d lost while I was in Jamaica! The food wasn’t unhealthy at all, but it was so good and there was so much of it, it was hard to restrain yourself! It was all worth it 🙂

You can find out more about Goldeneye here. We booked the holiday through Turquoise Holidays who were excellent as always.