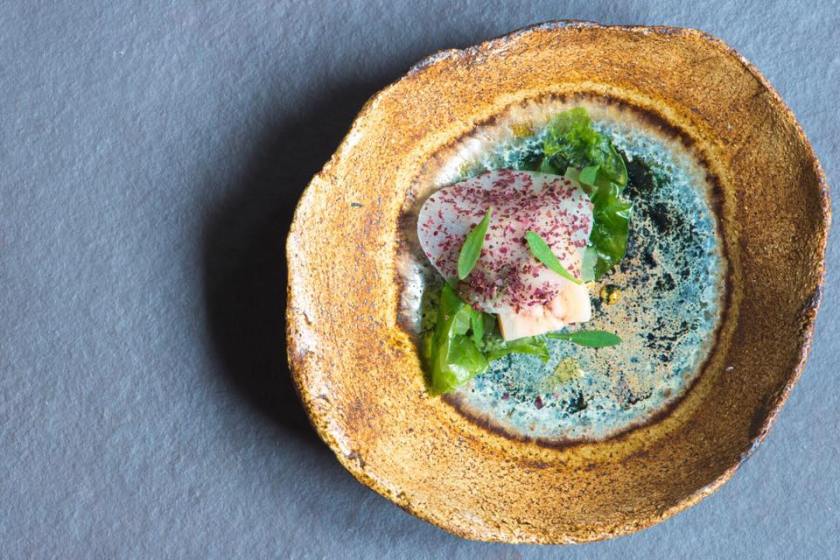 I’m becoming acutely aware that every time I try a new tasting menu, I say it’s one of the best I’ve had. But the tasting menu at The Forest Side really was spectacular, and I think a big part of this was down to the freshness and seasonality of the dishes. It boasts a superb kitchen garden within the grounds of the hotel, which I wrote about in my previous post about our stay (you can read here). This extended to all of the food and even drinks at The Forest Side.

Upon arrival, while most people were sipping coffees and tucking into Afternoon Tea, we got started on the cocktails! I kicked off proceedings with a Flowering Currant Margarita, with blanco tequila, flowering currant, cointreau and lime. It was stunning! I stupidly didn’t write down what Tim ordered and looking at the menu it’s impossible to work out what it might have been – the menu and selection of foraged ingredients is vast! 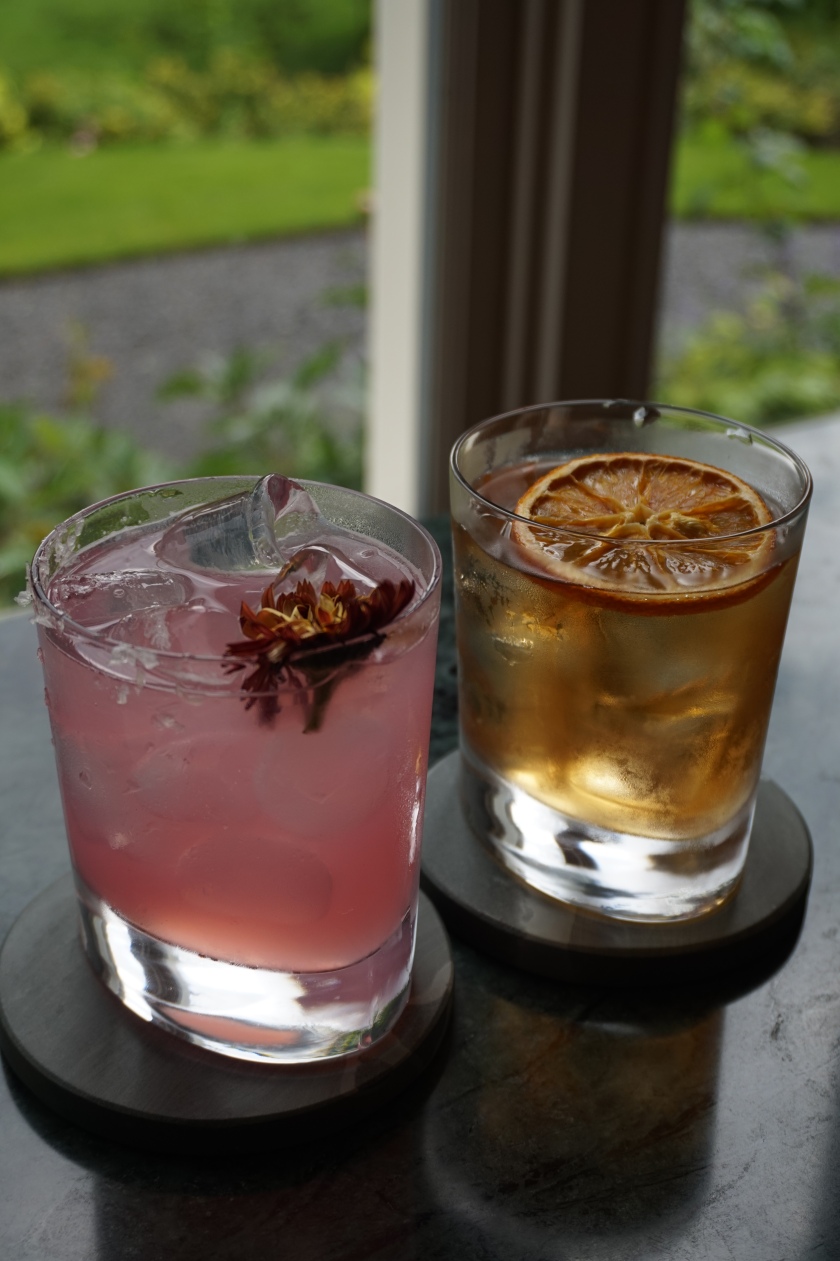 Those cocktails went down very nicely (and rather quickly!) so we tried some more. At this point Tim went for his classic Gin Martini and I chose the ‘Cocktail of the Week’, the BB Sour: buckler sorrel infused gin and salad burnette sour! Equally delightful! 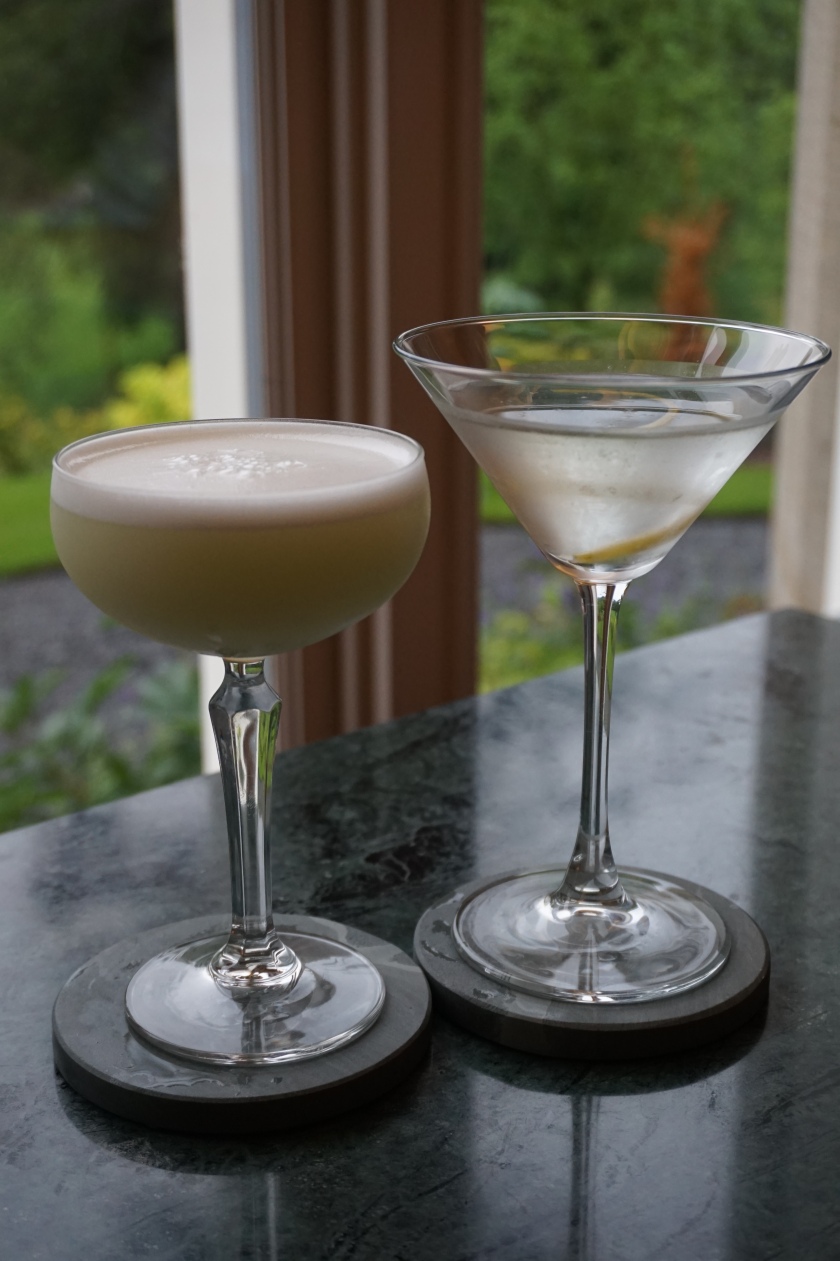 We thought it might be a bit antisocial to move on to a third round at this stage in the afternoon, so we retired to our room to get changed, and shortly returned for yet more drinks, and to indulge in a fine dining dinner.

We were seated in the bar area and this time Tim opted for a Barngates Brewery Pale Ale (which I tried and was also very nice), while I chose the rhubarb kir royale. 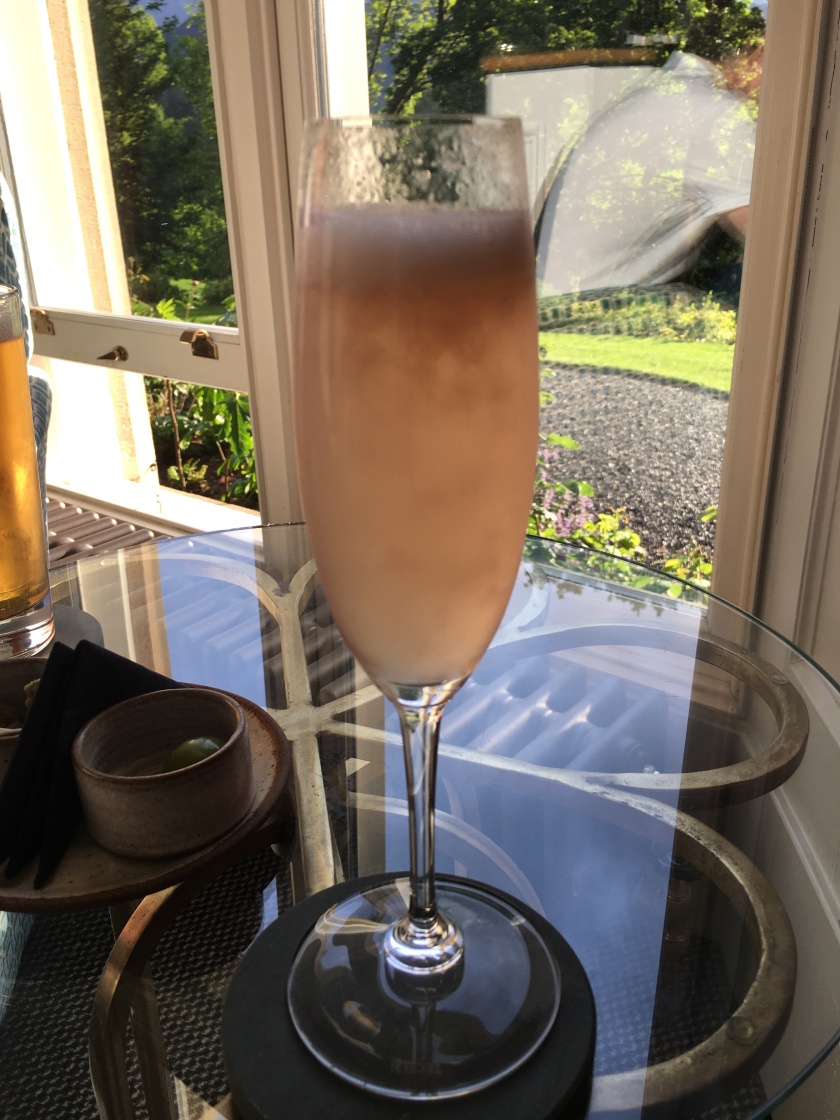 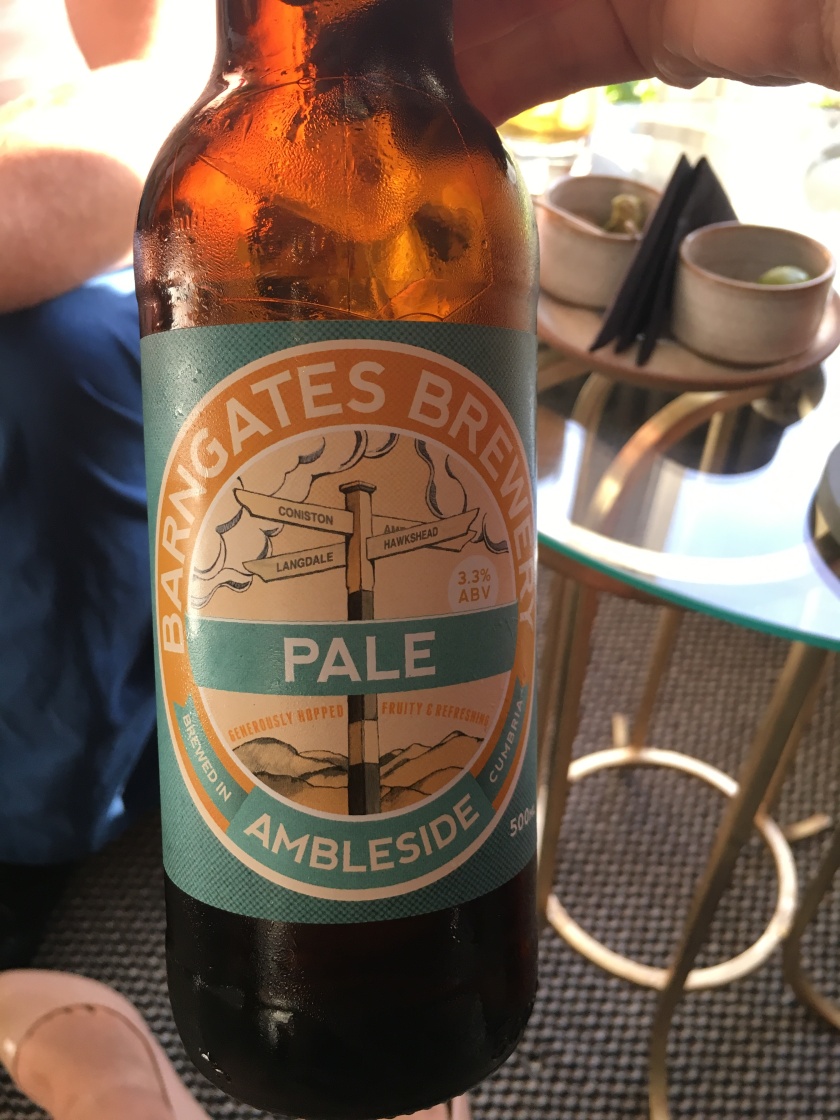 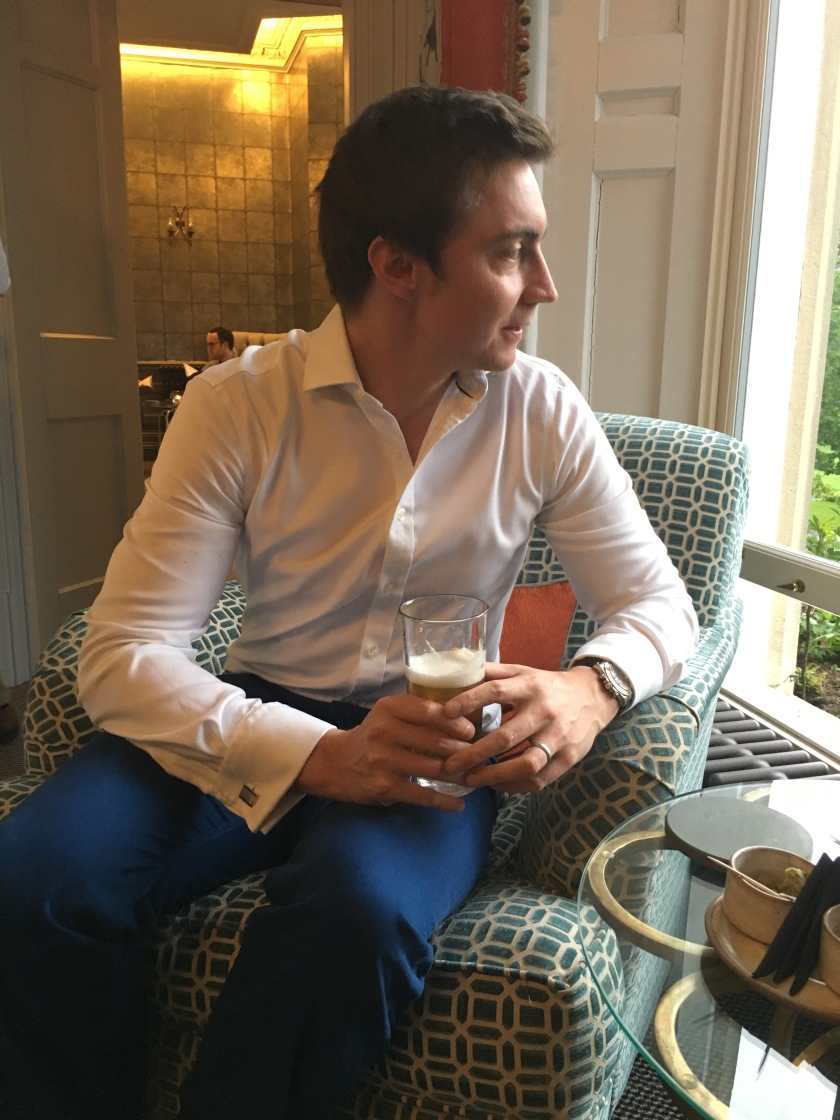 We were presented with our menus (a lovely keepsake!) and faced the tough choice of which of the THREE tasting menus to go for. The Reet L’al ‘Un (I adore the naming conventions here!) was a three course menu, The L’al ‘Un was a six course menu and The Grand ‘Un was a whopping 10 course menu. 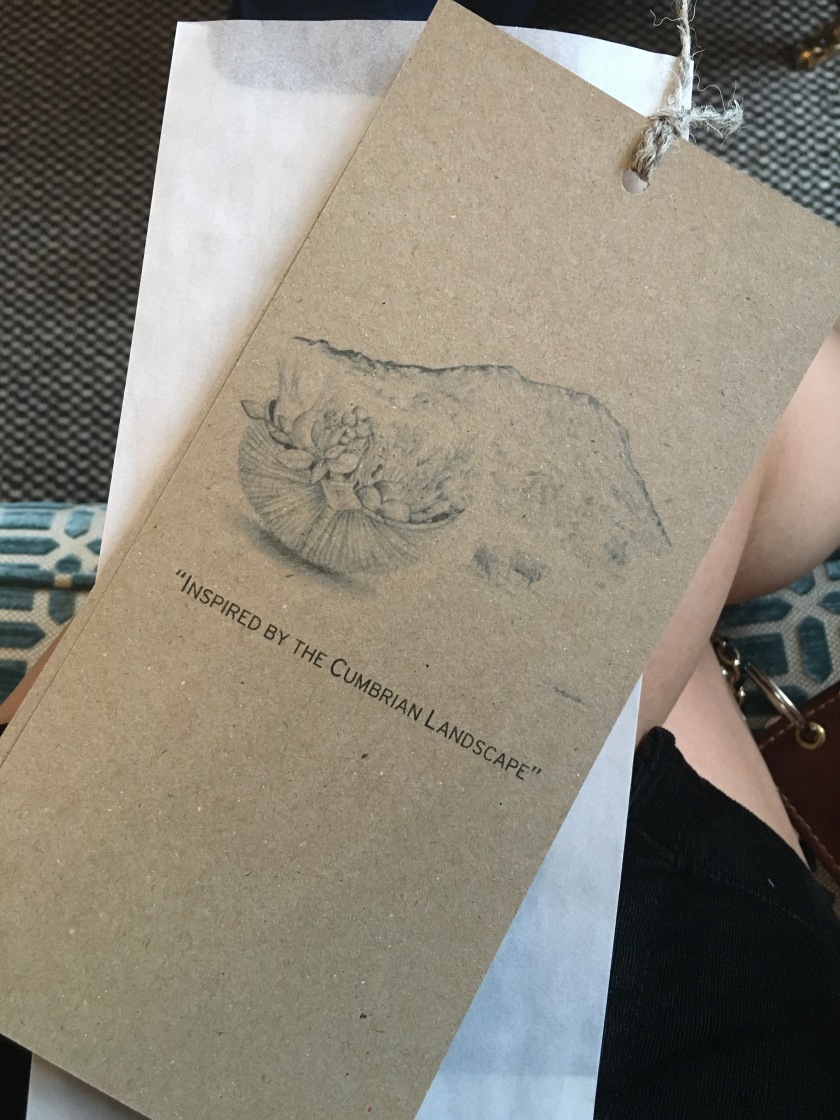 Well you can probably guess which one we went for. Yes, we’re piggies! But it looked so incredibly good, we couldn’t resist. You’ll have to excuse the photo quality – as always in restaurants like this, I take photos on my phone as quickly and discreetly as possible to avoid being THAT person in a nice restaurant 😉

Head Chef at The Forest Side is Kevin Tickle, who as the website describes is ‘Cumbrian to the bone’ and spent his childhood exploring local forests and beaches, learning and understanding all they had to offer. Which absolutely comes across in his cooking. 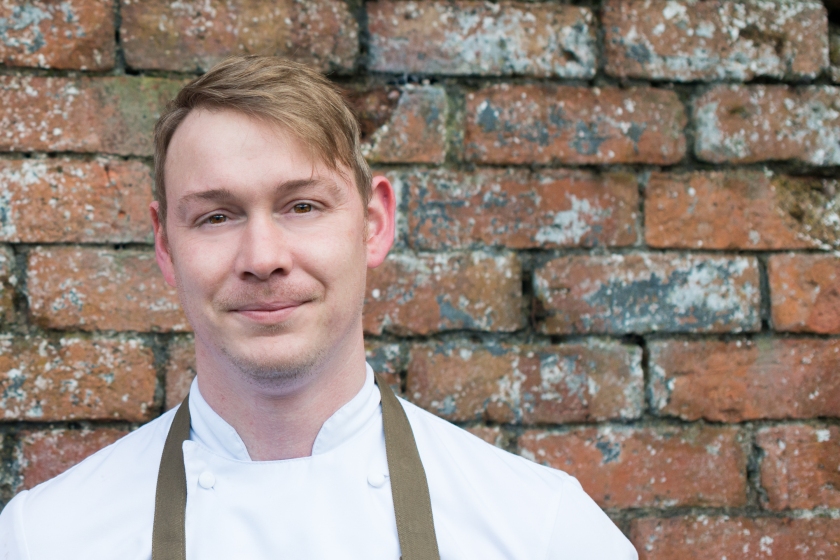 The dining experience echoes Tickle’s cooking style. The website describes how they have ‘sought to create a Cumbrian terroir at Forest Side, to link the dining experience to the landscape’ which really is spot on. The restaurant is light and airy (plenty of space between tables, always a big plus in my opinion – I hate being crammed in so you can hear the conversations between other guests!) and views over the Lakeland Fells. I loved the centre piece sommelier’s table made from a windblown tree from the gardens and I was desperately working out how to casually slide a few of the colourful earthenware plates (made by local artisan ceramicists) into my bag – they were gorgeous!

So what did we eat?…

We started with three amuse bouches. We weren’t told what the first one was, which was all rather mysterious. We were asked to try it and guess the ingredients. It tasted quite gamey and we thought there might be some wild boar in there. We were on the right lines, but it also had rabbit and we certainly hadn’t guessed the final ingredient – squirrel! There’s a first for everything, folks! 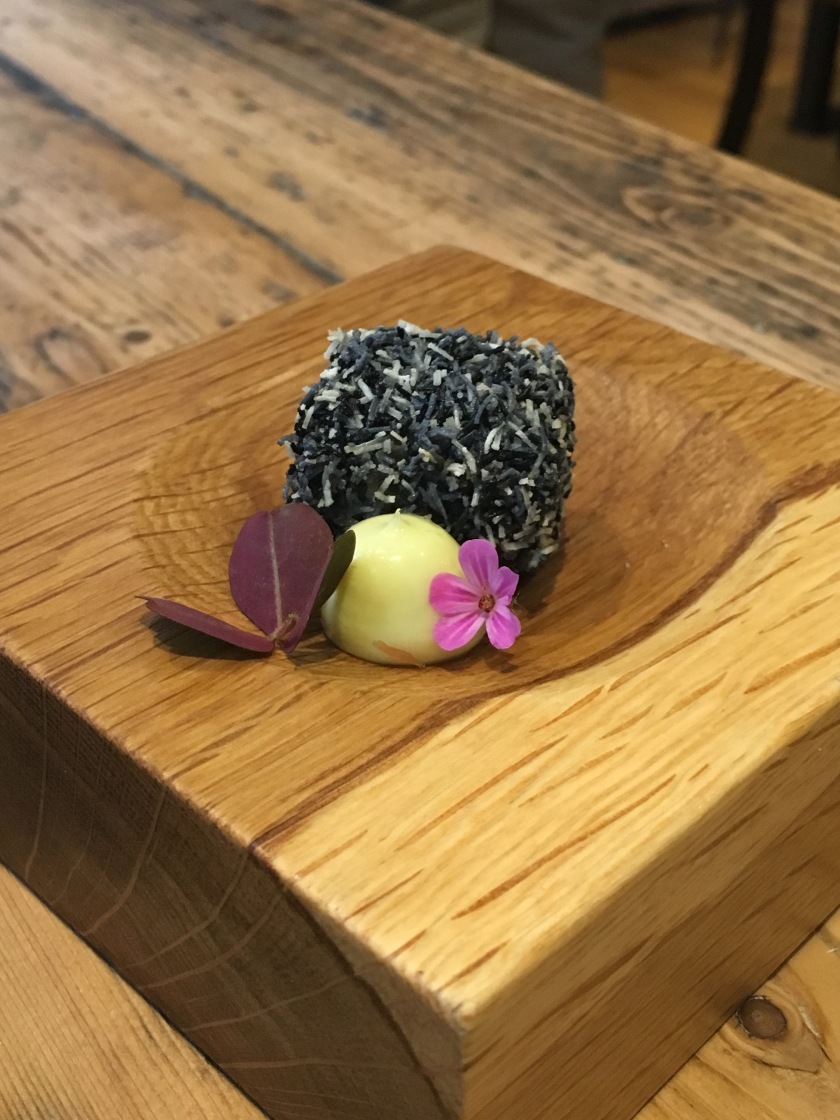 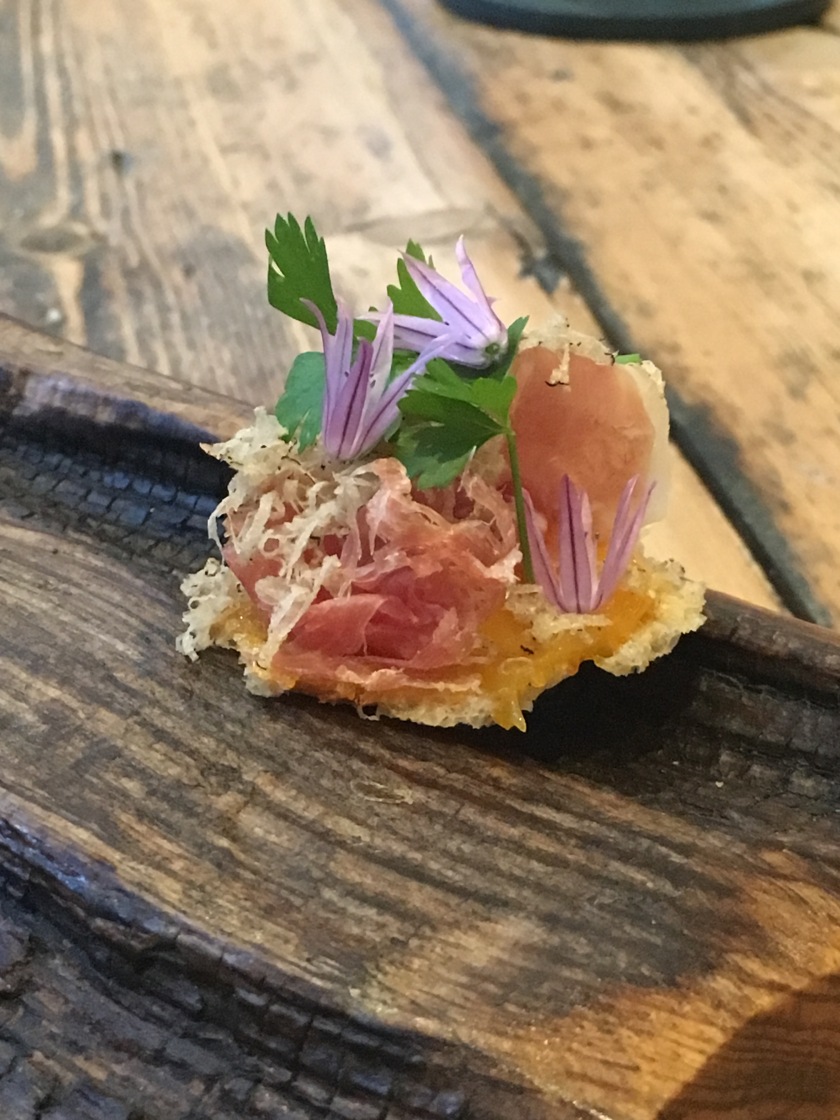 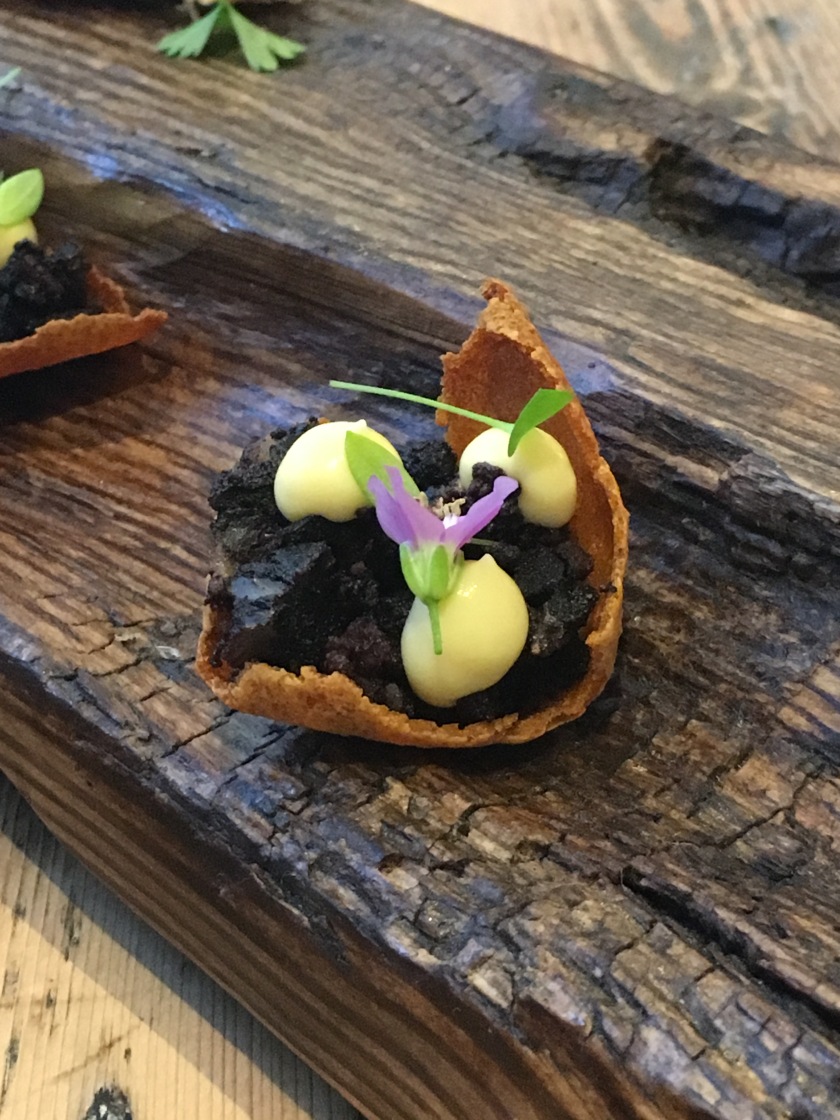 Our first course was Confit Jersey Royal, Charcoal, Mint. The flavour of the Jersey was so strong and just wonderful – one of our favourite dishes of the evening, and we’d only just got started! 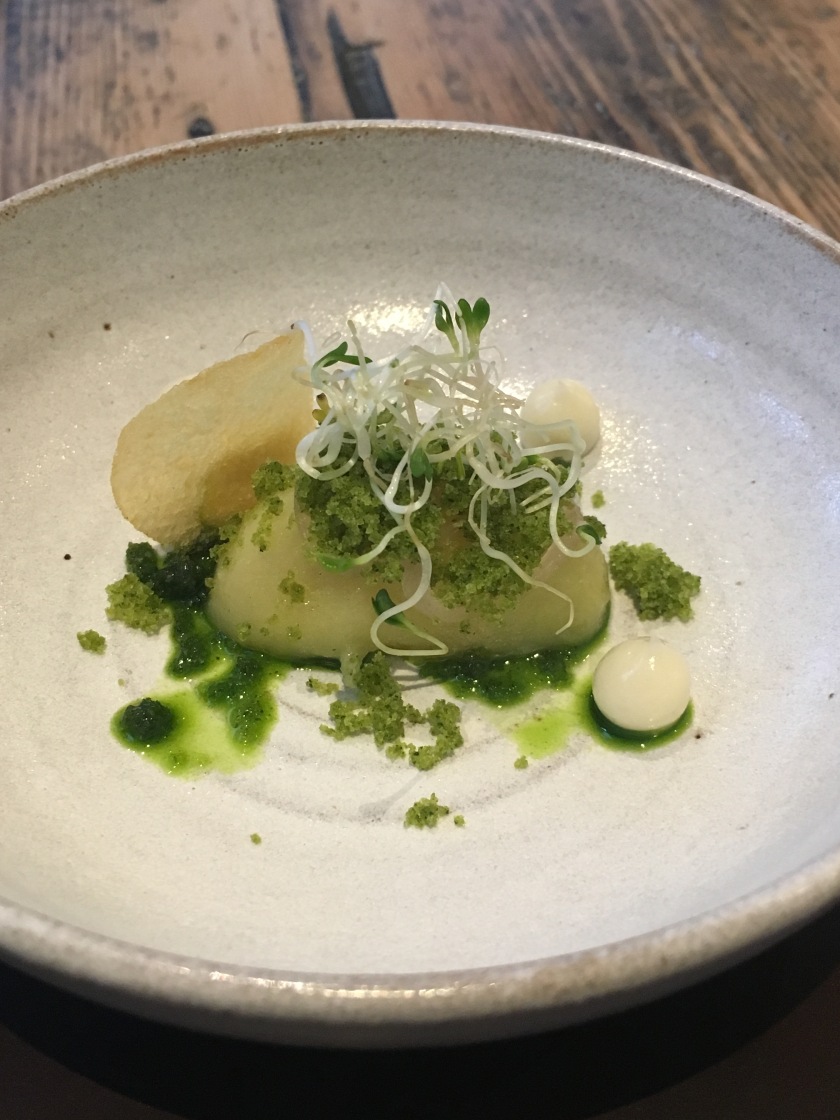 Next was Seaweed Broth (served separately as you can see below), with Pig’s Tail, Coastal Greens and Apple Honey. Rich, meaty and warming. 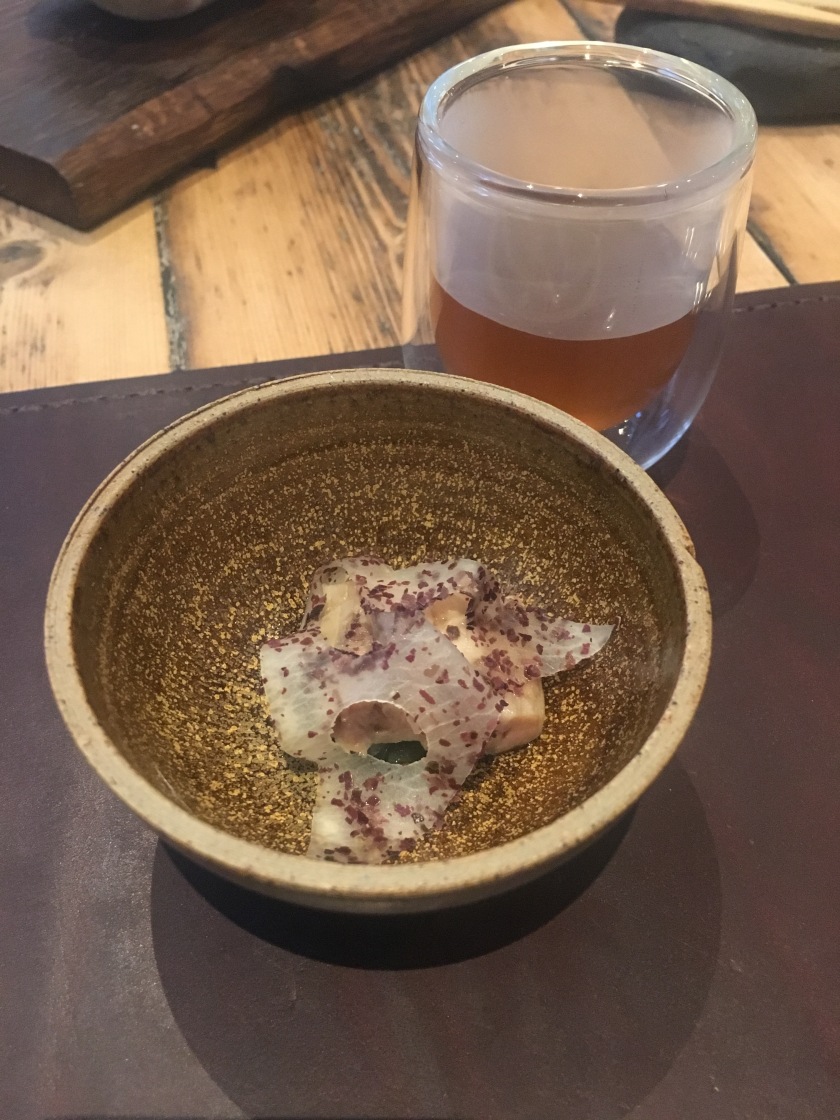 Third course was Venison Pastrami, Smoked Juniper Yoghurt, Cais Na Tire, Ramson Capers. This was a really tasty dish. I was intrigued by the Cais Na Tire, a type of Irish farmhouse cheese I’d never tried before. To be honest I wasn’t blown away, as it was quite a simple, young cheese. But having said that, an older more mature cheese would probably have been too overpowering, so it was a good choice (and always nice to try a new cheese!) 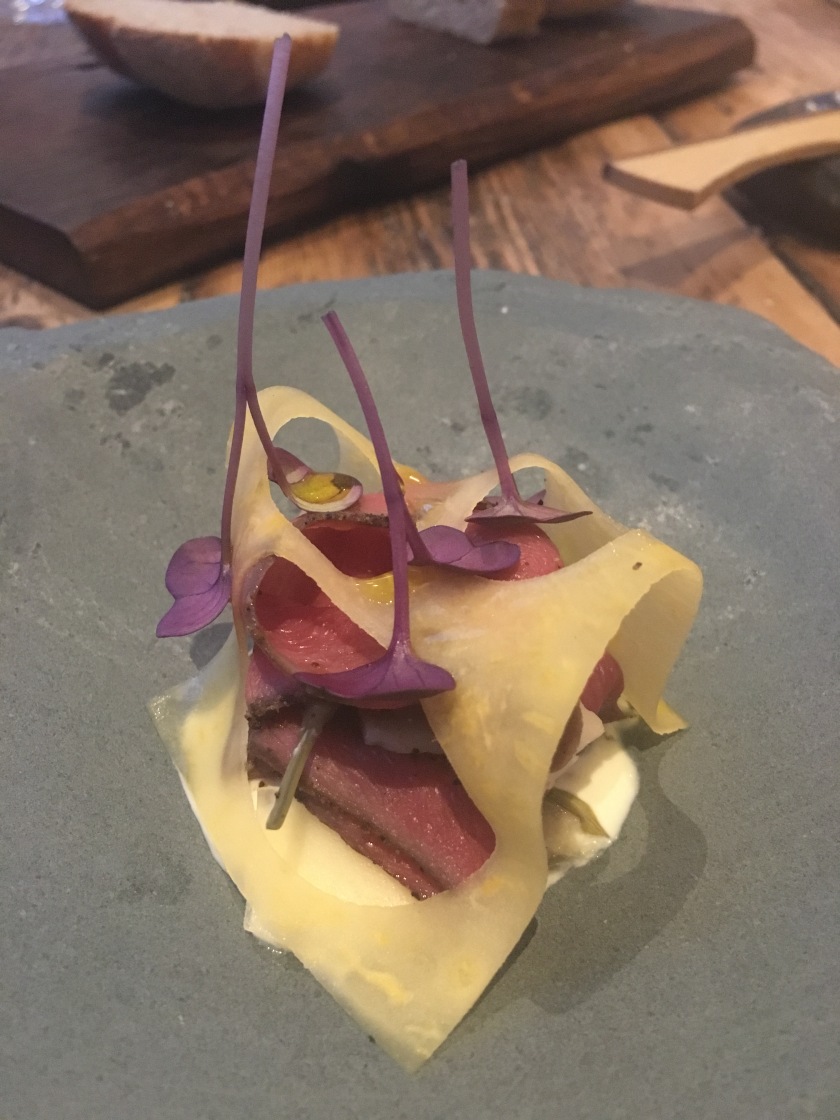 The following course was West Coast Scallops, Alliums, Elderberry, Smokey Oats and ‘Our’ Guanciale. This was seriously good – I’ve never eaten alliums before (despite them being one of my favourite plants to photograph) – there were lots of ‘firsts’ for me in this menu. 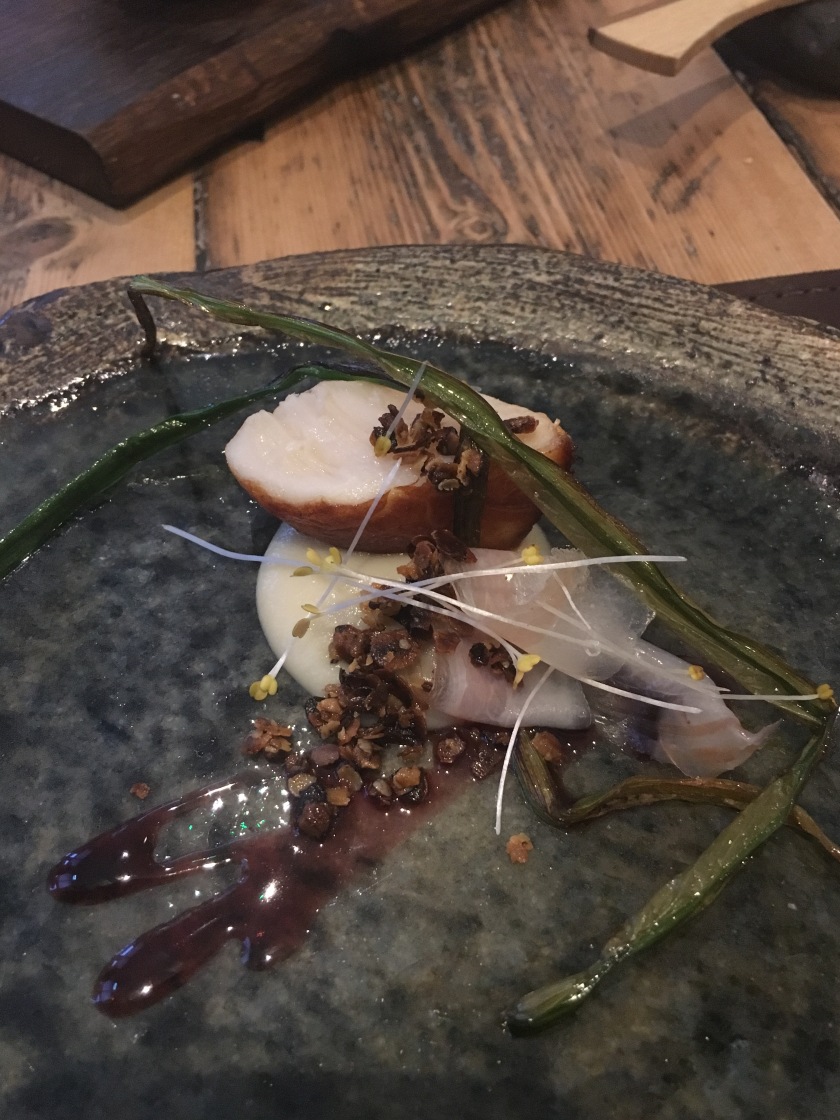 Fifth course (half way through, now!) was Beetroot, Ragstone, Sourdough Crumpet, Sunset Velvet. Another tasty dish with such a variety of flavours and textures. 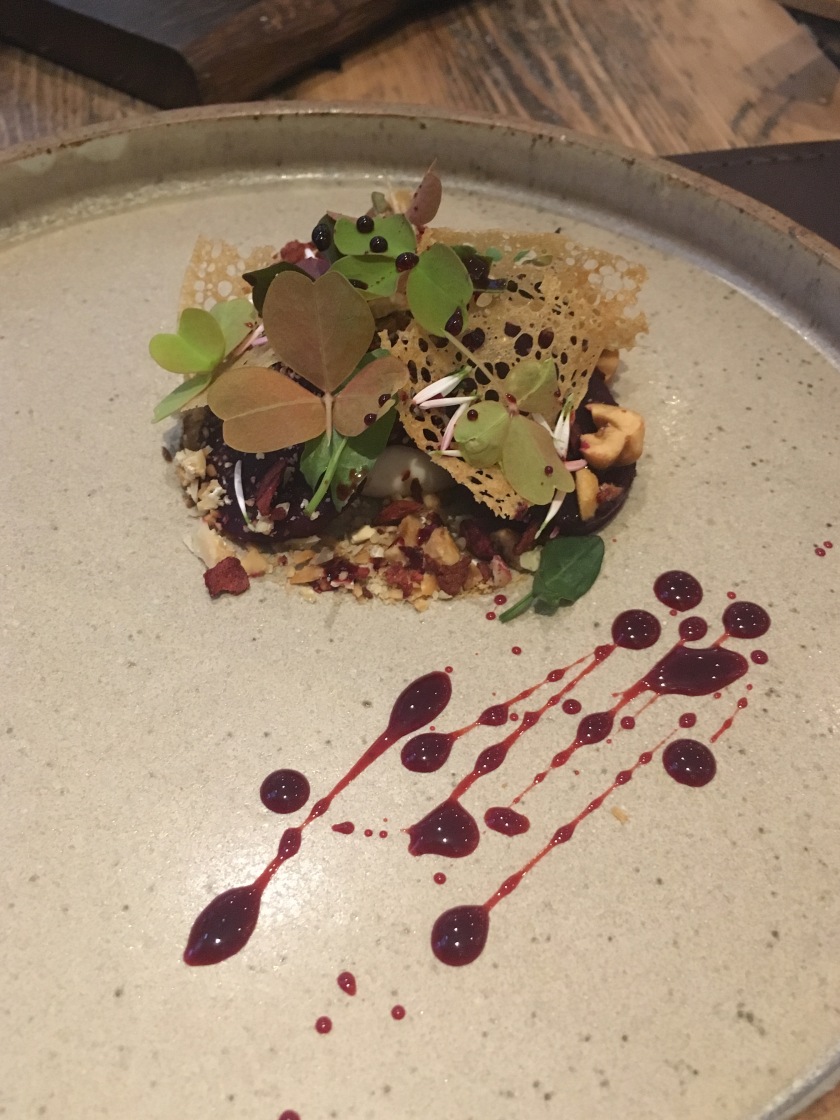 Sixth course was North Atlantic Cod, Asparagus, Oyster, Dill. Such beautiful fish – it was a little ‘dill-heavy’ but worked within the dish. 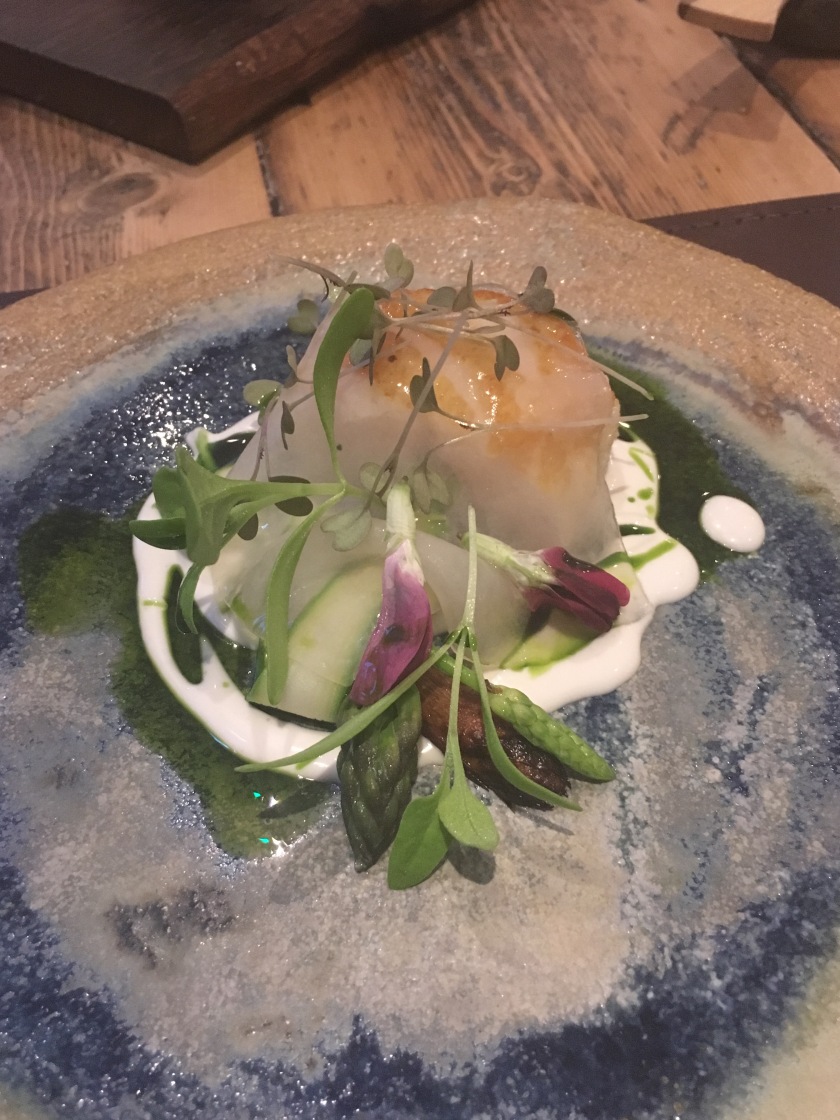 The seventh course to be served was Will and Emma’s Herdwick Hogget, Hay Custard and Hedgerow Shenanigans (!!) I mean, what an amazingly titled dish. I liked the personal touch of naming the people who raised/supplied the hogget, and as for ‘hedgerow shenanigan’, I couldn’t love that any more. And importantly, the meat was beautiful. People need to eat more hogget, it’s fantastic! I was also a big fan of the hay custard.

Eighth course was a palate cleanser, Sweet Cicely, Flowering Currant, Herbs and Flowers. This was incredibly floral (surprisingly enough!!) and exactly what was needed to lead us in to dessert. 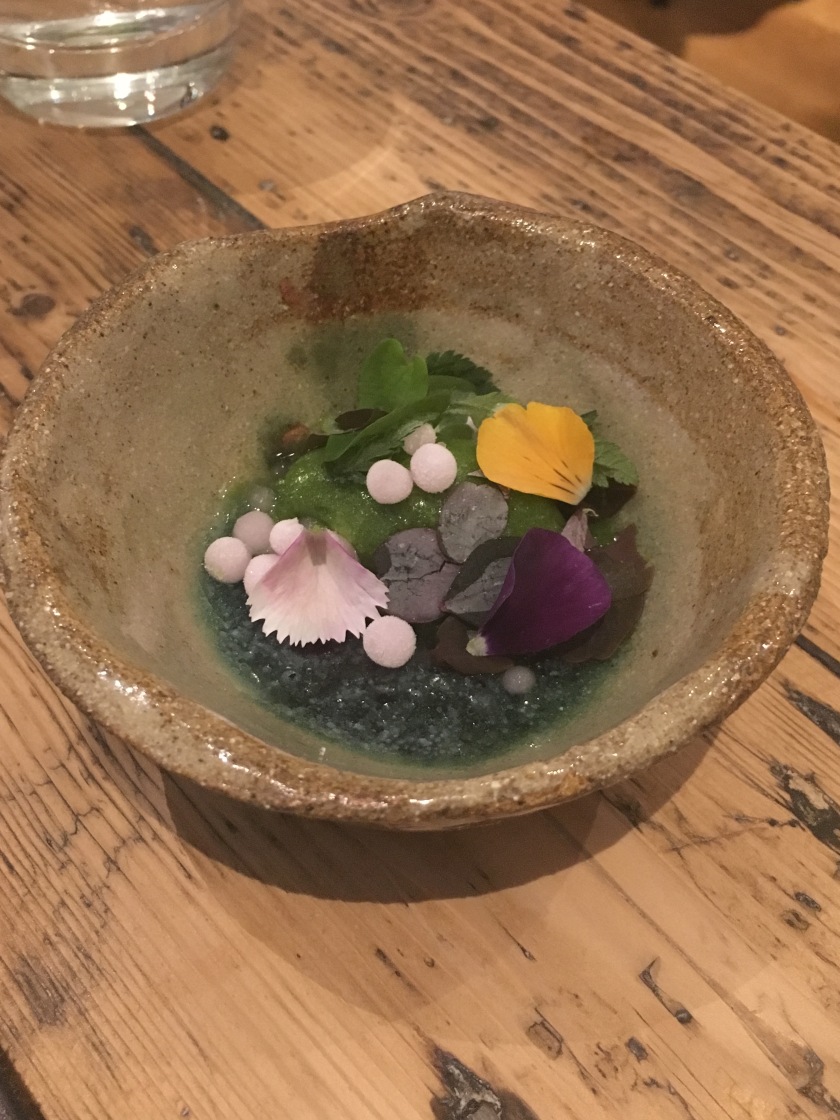 Ninth course was Sweet Cheese Parfait, Honey, Sea Buckthorn and Fennel. What’s not to love about this dish? I could have eaten two of these, just perfect! 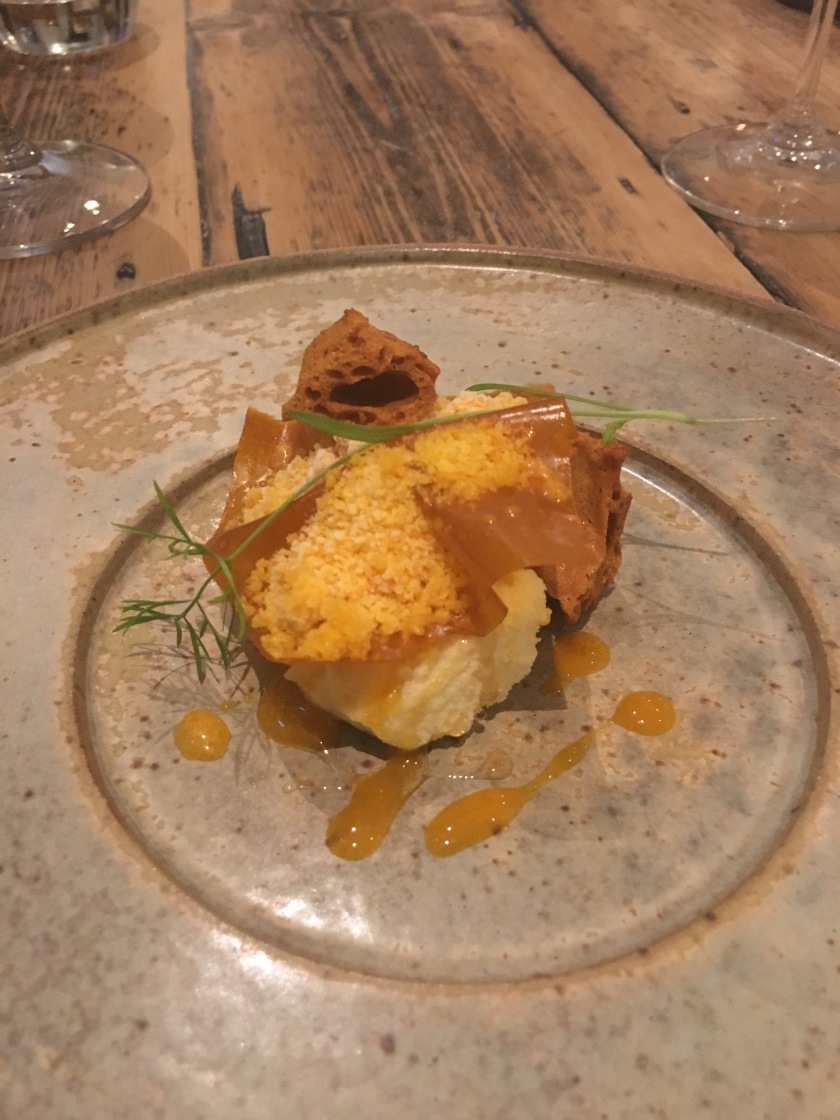 Final (!) dessert was Apple, Buttermilk and Lovage. This really stole the show for me – it was a bit like a deconstructed apple crumble and all of the flavours were so powerful, the perfect impressive way to end the meal. 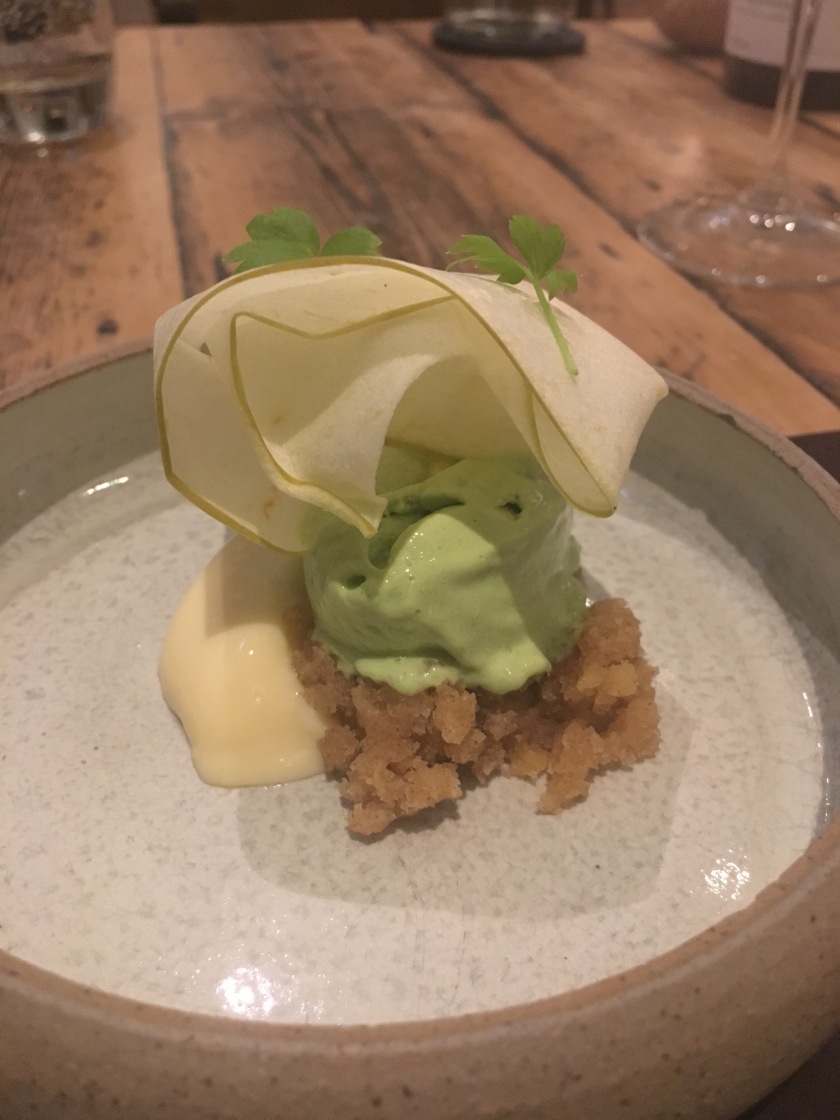 However, it didn’t actually end there. Every time I’m at a restaurant like this, I drool over the cheese trolley as it’s wheeled around to other fellow cheese-loving diners. But I never have enough room to fit a cheese course in. You might think, how the hell did we manage to fit one in after 10 bloody courses?! Were we even greedier piggies than you originally thought? To be honest, I’m not completely sure how we did fit it in. Quite a bit of wine had been consumed at this stage and we still had some left, so we thought it could be a nice way to finish off the last of the vino (and who am I to say no to cheese, ever?!)

The waitress who was serving us was completely charming but fairly new and didn’t know much about the cheeses which was a shame, although she did know the names of all of them, which given the huge number of cheeses on the trolley was an achievement in itself. We were kindly given the opportunity to sample some of them, and eventually settled on Yorkshire Monster, Hebden, Leeds Blue, Rachel, Lanark and one which I was sure she called ‘Cabine’ but nothing is coming up when I search for this online – any thoughts, please let me know in the comments! There was also an excellent selection of chutneys (once again with ingredients from the garden) so we went for the rhubarb. 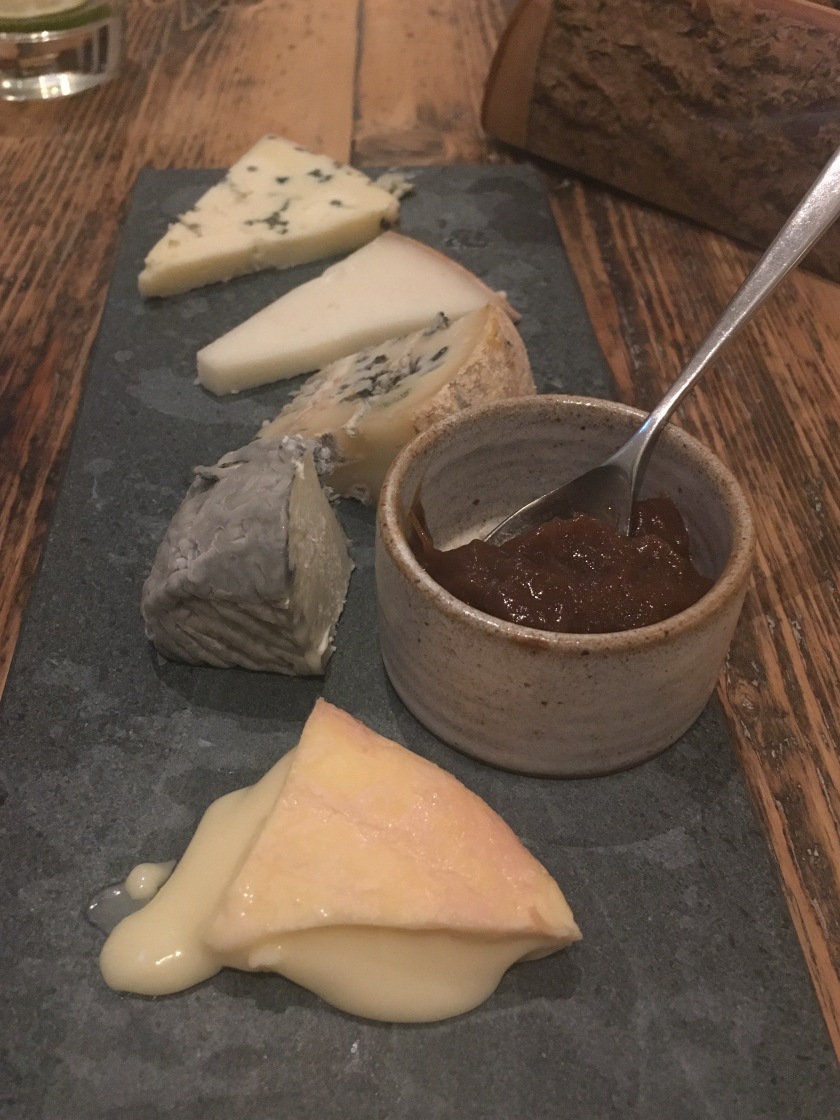 We practically rolled our way to bed after this feast – we were one of the first tables to be seated and were the last to leave! The service was superb throughout, although there was a tiny issue of them accidentally trying to charge us for three tasting menus when the bill arrived – we were a few bottles of wine down but thankfully still functional enough to realise the mistake, which was quickly corrected!

Breakfast the next morning was also very good, with a variety of options and types of breads, crumpets etc. The Forest Side is just outside of Grasmere where the original Gingerbread recipe was invented – so of course I had to have the Gingerbread Pancakes, which were devilishly good. 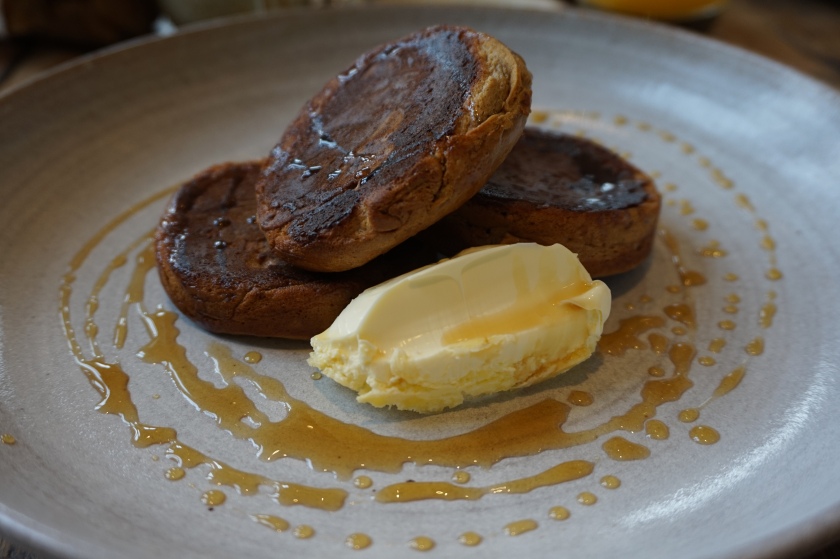 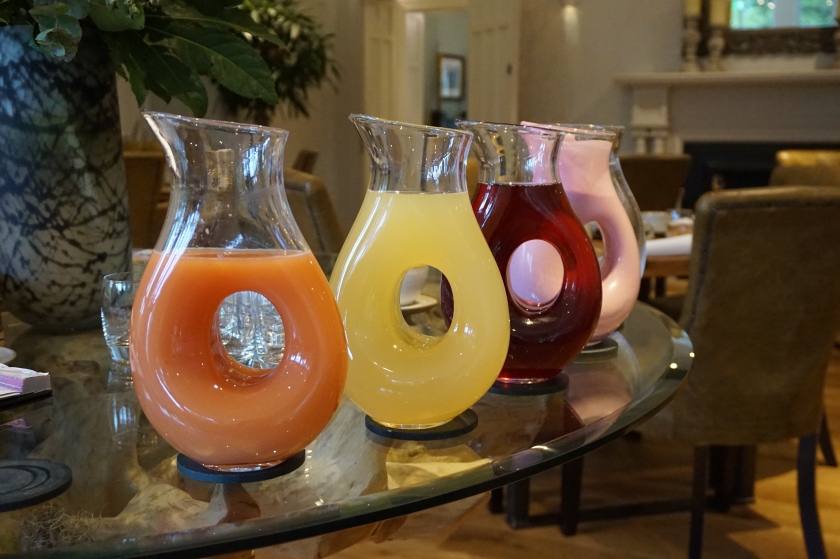 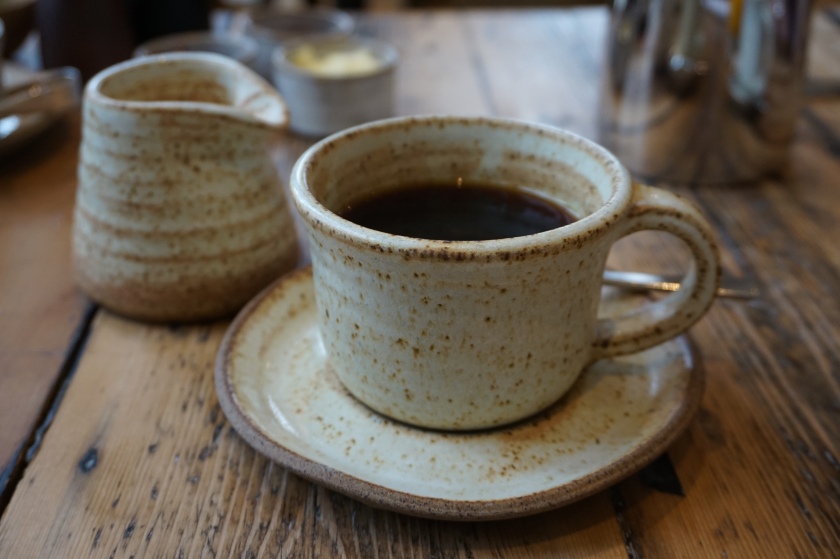 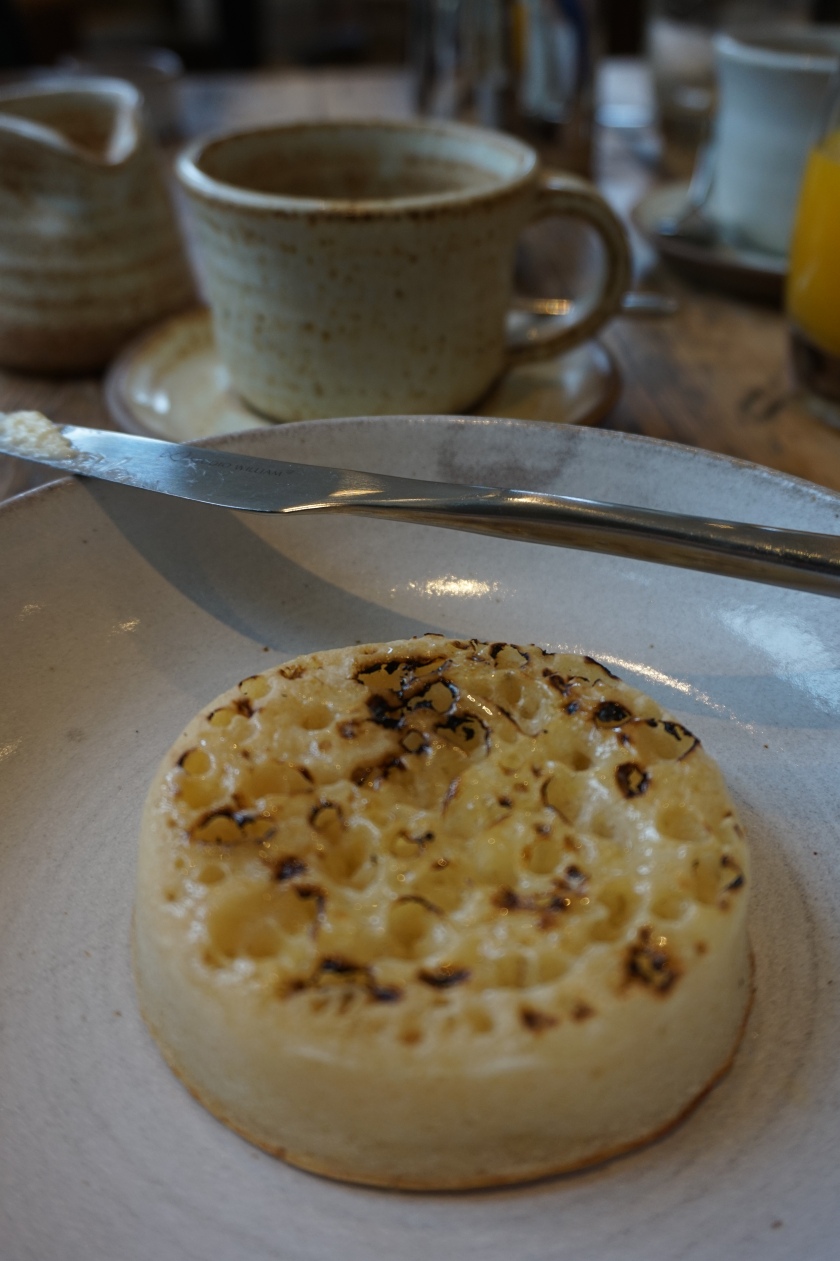 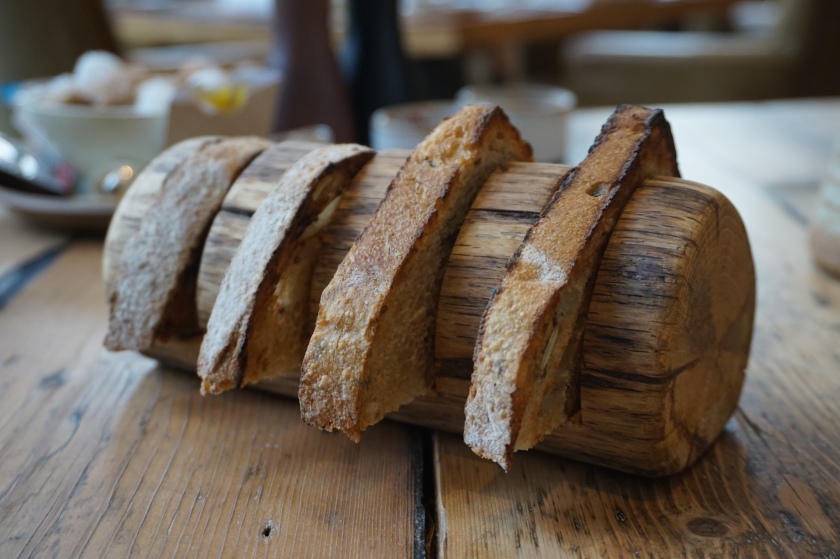 We had such a great stay at The Forest Side and although it’s a long way from where we live in London, we’d love to return again one day soon when the menu changes with the seasons. So thank you very much, Kevin and team – we were incredibly impressed!

If you’d like to find out more, you can visit their website here. We booked our stay through Mr & Mrs Smith.