Steak, steak, steak. There’s nothing I love more than a big juicy steak – I reckon at least half of my Instagram posts are steak (or at least meat!) focused and I’ve written about it countless times here on the blog, from restaurant reviews to butchery classes. But at the weekend, I had one of the best steaks I’ve ever had, and I’d even go as far as to say perhaps the best steak in London. It’s a bold claim, indeed! Where did this miraculously feat of beefy wonder occur? The usual Gaucho, or Hawksmoor? It was in fact at Barbecoa in St Paul’s. Let me tell you more…

Tim and I visited Barbecoa quite a few years ago for brunch. This was at peak ‘brunch popularity’ time and we set ourselves a bit of a challenge of trying somewhere new each weekend. Barbecoa was very much a treat – we’d been wanting to go for ages. And it was very good indeed (this was pre-blogging days, hence it’s not on here. I still have photos although they’re very dubiously filtered Instagram snaps. Oh, 2013, how you destroyed my overall photo quality!) I can’t remember exactly what we ordered from the menu but it was the typical egg, chorizo, sourdough, avocado-esque number.

Recently I’d been keen to find out what else Barbecoa had to offer, as I’d seen them talking about high welfare meat more recently (something that’s very important to me and I write about a lot) and the photos on their social channels looked lovely and meatylicious. On Sunday, Tim and I returned to the restaurant in St Paul’s, tucked away on the side of One New Change. We made our way upstairs and were seated at a big booth with spectacular views of the cathedral from the huge windows. Attracting so much light it did get a bit warm at times when the sun was shining, at which point the waiting staff subtly lowered the electric blinds – enough to keep the sun off your back but not too much that you couldn’t still admire the view. It’s a much bigger restaurant than I remembered, with plenty of seating from pairs up to large groups – perfect for a work do, perhaps somewhere to take clients from out of town or from overseas. It definitely has a wow factor without being stupidly expensive. 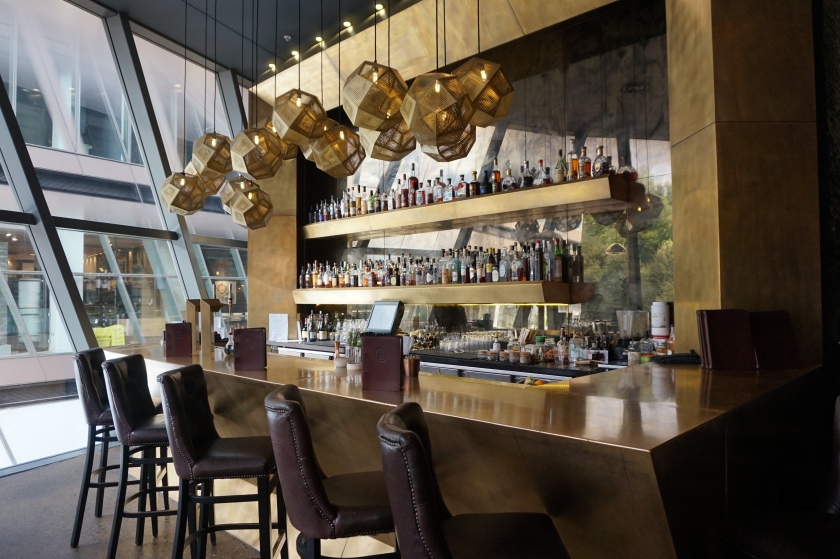 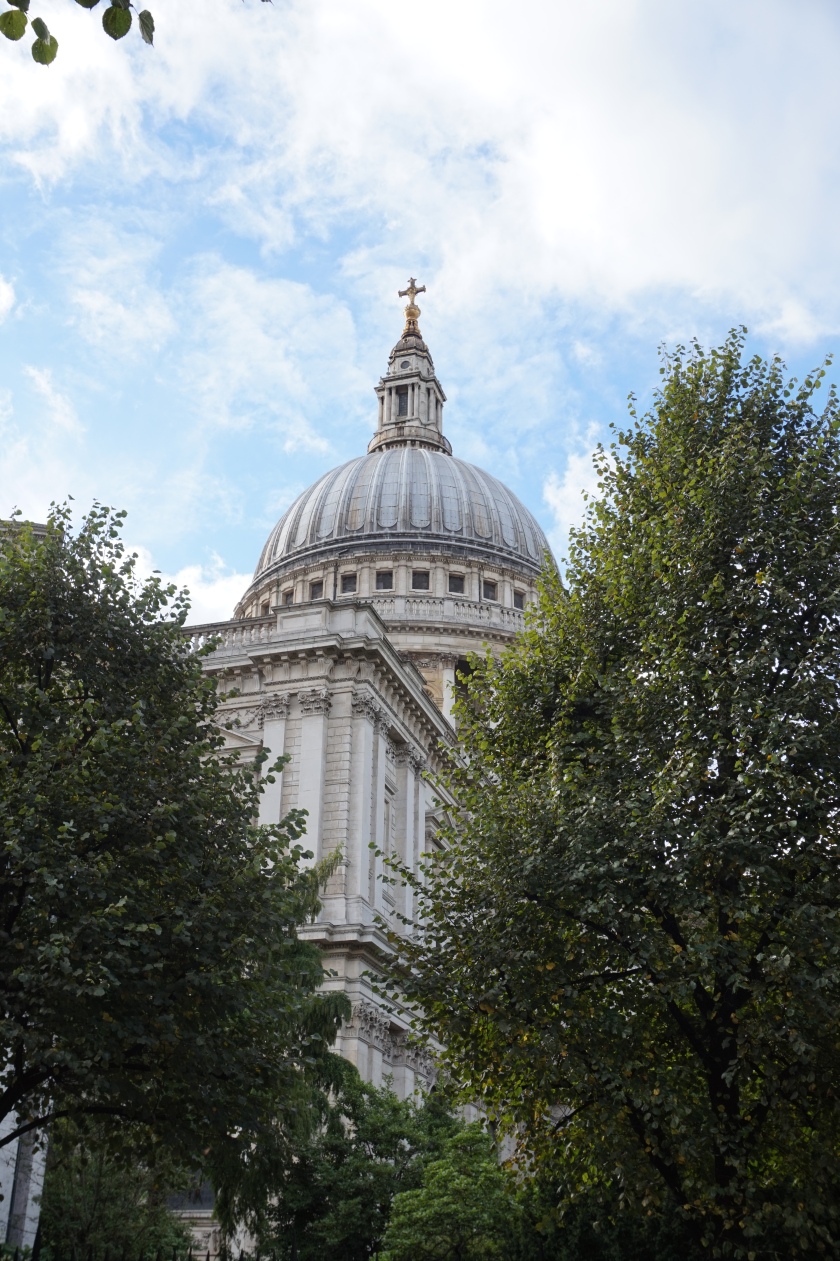 Which brings me to the menu – it was quite a large offering with lots of dishes which made my mouth water, it was difficult to decide. Again, the prices were reasonable, averaging around £10-12 for a starter and £20 upwards for mains (obviously the steak dishes were more pricey but still in line with, or potentially a little cheaper than other steak restaurants in London).

What a dream! It was beautifully plated as you can see and oh my god the flavours. The curd was soft and rich and the truffled honey gave it a decadent sweet edge alongside the figs. The crunch of the nuts and bitterness of the leaves gave it an exciting texture and mix of flavours. My mouth is watering again.

Tim ordered the Stone Bass Ceviche with pickled melon, fermented red chilli and ruby grapefruit, which would have been next on my list if I didn’t have the goat’s curd. He really enjoyed it and said that the different sweet and hot flavours gave the ceviche an unusual twist, and it was very light and fresh.

For main course we had our eyes on the Chateaubriand. The couple next to us ordered it and it looked incredible. I haven’t actually ordered chateaubriand in a restaurant before, because it had a lot to live up to for me. When we lived in Cyprus, we used to go to an adorable little restaurant in the Troodos Mountains which pretty much exclusively served chateaubriand. This was quite an unusual treat in Cyprus – while there was plenty of chicken, pork, lamb and goat available, there wasn’t a huge amount of beef. But the owner and chef really was a magician – his special ‘thing’ was that he would cook a whole chateaubriand to order depending on how people wanted it cooked. In our group, people wanted everything from well cooked (shock horror!) through to rare. He would bring the whole piece of meat out to the table and slice it in front of you, with one end rare through to well cooked at the other end. And it just melted in your mouth.

Thankfully Barbecoa’s steak lived up to expectations! It was served for two with insanely good truffle butter. We ordered mash with spring onion and chives, and broccoli with miso and almonds on the side, with a couple of glasses of the sommelier’s choice of red wine, the Acustic Brao Vinyes Velles (2014) from Montsant, Spain.

As I’ve said throughout this post, it really was gorgeous. The outside was browned and nicely crispy, while the inside was soft and juicy. All of their meat is from higher-welfare, organic and native-breed meat from farmers in the UK and Ireland – extra bonus points! The sides were excellent too – everything we tried had a unique touch, nothing is ‘standard’. For instance, the broccoli could have been cooked and served alone but the extra inclusion of the miso gave it a delicious difference.

We had a bit of a break before tackling dessert. Tim indulged in an Old Fashioned – there are four on the dessert menu, and the lovely waitress was able to advise on which to choose based on dessert choice. He went for the Gold Fashioned – Blanton’s Gold single-barrel bourbon, orange bitters and demerara gomme (sugar syrup). I’m not a huge fan of this cocktail as I find it a bit too sweet, but Tim loved it and it perfectly complemented his dessert.

He chose the Barbecoa Brownie with plum, ginger and bay leaf yoghurt ice cream – I sneaked a spoonful and it was great! Once again, this isn’t any old Brownie – this is a Barbecoa brownie with so many different and wonderful flavours.

My dessert was the ‘Snickersphere’, one if their signature desserts. The outer layer was dark chocolate and inside it was layered with softer cream, salted caramel and peanuts (very much like a Snickers bar) scattered around the plate with a quenelle of ice cream. I was surprised by the inclusion of popping candy in the dessert. Funnily enough, I tweeted about popping candy when I was in South-East Spain recently – EVERY dessert I had over our long weekend in the country had popping candy in it. I thought this might have been a Spanish thing but it seems it’s happening in the UK now too (unless I’m actually going completely mad and my taste buds are just going insane!!). I’m not really a fan of it – I never liked it as a child and I don’t like it now. I can put up with it in a dessert but I’d rather it wasn’t in there. 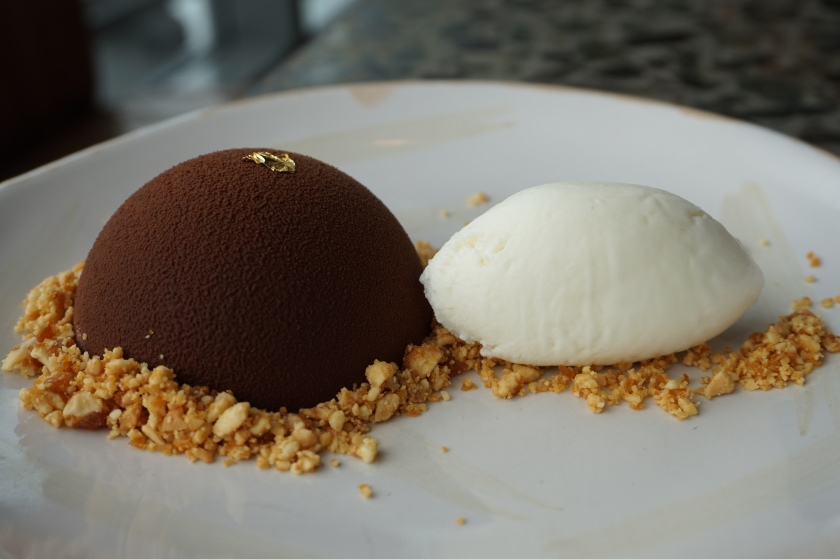 Leaving aside the popping candy, we had such a brilliant lunch at Barbecoa and we’ll definitely be going back soon. I seriously can’t get that chateaubriand out of my head. A big thank you to all of the team for the impeccable service and a really enjoyable Sunday afternoon.

I was invited to review Barbecoa but did not receive any payment. All views are my own.